Biden 'expressed his support for a ceasefire' in call with Israeli Prime Minister, White House says 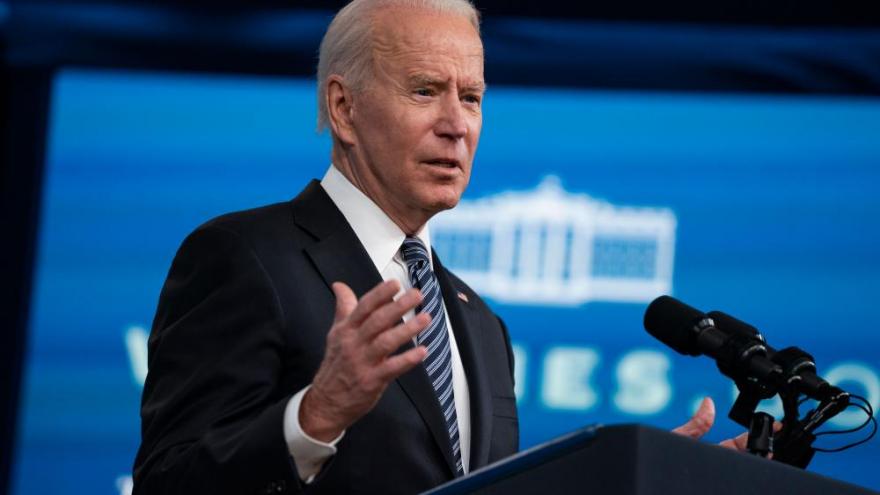 President Joe Biden has so far resisted calls from fellow Democrats and foreign allies to increase pressure on Israel amid the worsening violence. But notable shifts in the administration's language in news releases revealed the level of concern within the West Wing over the conflict is rising.

During a telephone call with Israeli Prime Minister Benjamin Netanyahu, Biden "expressed his support for a ceasefire and discussed US engagement with Egypt and other partners towards that end," a White House description of the call read.

It was the first time the White House officially made mention of a ceasefire in its ongoing efforts to contain the situation. Yet the language stopped short of a full-on demand for a cessation of violence, something some Democrats have been pressuring Biden to make.

Instead, it suggested Biden was seeking a diplomatic way to end the conflict by encouraging a halt to hostilities without calling explicitly for Israel to stand down.

A senior administration official told CNN Biden is still not explicitly calling for a ceasefire.

It was the third time Biden has spoken with Netanyahu in a six-day stretch. Notable shifts in the administration's language following each call have revealed heightened levels of concern over the growing conflict.

The White House said Monday that Biden reiterated Israel's right to defend itself but "encouraged Israel to make every effort to ensure the protection of innocent civilians."

They also "discussed progress in Israel's military operations against Hamas and other terrorist groups in Gaza."

The growing number of civilian deaths in the intensifying battle between Israel and Hamas in Gaza is causing worry inside the White House as officials work the phones with partners in the region.

Over the course of the week-long conflict, Biden had resisted calls from fellow Democrats and foreign allies to publicly increase pressure on Israel amid the worsening violence. Biden's hesitance to criticize Israel's actions and initial reluctance to support a ceasefire raised questions about his strategy in the Middle East among Democrats whose approach to the issue has shifted in recent years.

Speaking Monday, the White House press secretary Jen Psaki said it would not be "constructive" for the White House to reveal every aspect of Biden's conversations. Instead, she said the US was working through "quiet and intensive" diplomacy to bring the violence to an end.

"Our focus, our goal, every single action we take, every statement we make, is with the objective of reducing the violence and bring an end to the conflict on the ground," she said.

"There are times in diplomacy where we'll need to keep those conversations quieter, we won't read out every component of it," she went on. "But that is the objective, that is the prism through which every action and every comment is being made."

So far, Biden has remained adamant that Israel has a right to defend itself against rocket attacks from Hamas. The last time he addressed the situation in public, Biden said he did not believe Israel was overreacting by pummeling Gaza with airstrikes.

Psaki would not say whether his assessment had changed since then.

Now, as Israel signals the violence will continue into a second week, Democrats in Washington are calling for Biden to say more. More than 25 Democratic senators, led by Georgia Sen. Jon Ossoff, released a joint statement calling for an immediate ceasefire agreement in Israel and the Palestinian territories to "prevent further loss of life and further escalation of violence."

The statement signaled the growing concern in Congress over the escalation of violence in the Middle East. Other Democrats have also called for more robust action by the administration to bring about a truce.

"I think the administration needs to push harder on Israel and the Palestinian Authority to stop the violence, bring about a ceasefire, end these hostilities, and get back to a process of trying to resolve this long-standing conflict," Rep. Adam Schiff, a California Democrat, said Sunday on CBS' "Face the Nation."

Biden has so far shown few signs he is bending to pressure from his party. A longtime supporter of Israel, his politics do not appear to be shifting even as progressives in his party are pushing for a stronger condemnation of Israel.

Asked what Biden's message is to fellow Democrats who have chastised him for not condemning Israeli actions, Psaki said that "sometimes you have to step back from politics for a moment."

"It's not easy to do," she said. "We recognize and agree that watching the lives lost of Palestinian children, of these families, the fear you see in the eyes of the Israeli people, it is heartbreaking. It is heartbreaking."

Antony Blinken, the US secretary of state, is traveling on an unrelated trip in northern Europe. He said at a press conference in Copenhagen with his Danish counterpart that the US is working "intensely" behind the scenes to bring the violence in the Middle East to an end.

"We are ready to lend support if the parties seek a ceasefire. We'll continue to conduct intensive diplomacy to bring this current cycle of violence to an end," Blinken said. "Then we will immediately resume the work, the vital work, of making real the vision of Israel on Palestinian state, existing peacefully side by side with people from all communities able to live in dignity."

Neither Biden nor the White House has explicitly condemned the bombing of the high-rise in Gaza that housed the offices of the Associated Press and Al Jazeera. Israel officials, including Netanyahu, defended the action on Sunday by claiming the building housed Hamas intelligence services.

Blinken said Monday the US had requested information about the bombing but that he had "not seen any information provided." Netanyahu said on CBS' "Face The Nation" that "we share with our American friends all that intelligence."

"I will leave it to others to characterize whether any information has been shared and our assessment of that information," he said.

American officials said the next 72 hours will prove critical in determining whether to apply more pressure to the parties to end the violence. The administration's envoy to the region, Deputy Assistant Secretary for Israeli and Palestinian Affairs Hady Amr, described his mandate during a White House event marking the end of Ramadan on Sunday.

"Tonight, I'm in Jerusalem, having been asked by President Biden to embark on a determined effort to halt the current violence gripping the West Bank and Gaza and Israel and to achieve a sustainable calm," he said.

Amr arrived in Israel over the weekend and is expected to meet with senior Israel and Palestinian officials. The US does not engage directly with Hamas, which it considers a terror organization. Instead, American officials say they are hopeful countries that do have influence over Hamas will play a central role in brokering peace.

Biden has not yet appointed a special envoy or US ambassador to Israel, though an ambassador nominee is expected as soon as the next two weeks.

In his own remarks during the Sunday Eid event, Biden only made passing reference to the situation.

Protests in support of Palestinians in Gaza formed in cities across the United States on Sunday, including in the Detroit metropolitan area, home to the largest Arab American population in the United States. Demonstrations took place throughout the weekend, including on Sunday in Dearborn, where Biden is scheduled to visit a Ford plant to highlight the new F-150 electric vehicle on Tuesday.

Thousands of protestors turned out for the event, according to local media reports and across social media, where a direct warning was given to Biden.

"Tuesday he will be here," one leader of the demonstration said. "We have heard from him; he will hear from us."