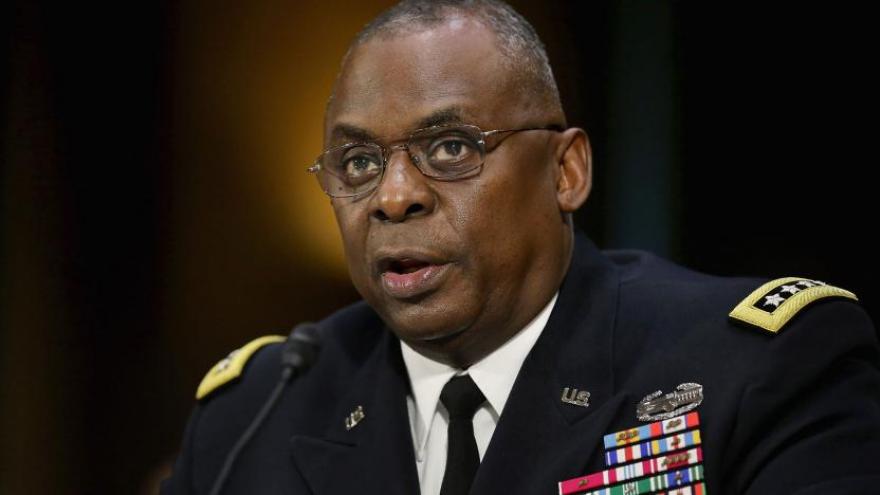 Retired Gen. Lloyd Austin testifies before the Senate Armed Services Committee about the ongoing U.S. military operations to counter the Islamic State in Iraq and the Levant (ISIL) on September 16, 2015 in Washington, DC.

(CNN) -- Senate Democrats are uneasy about granting a rarely invoked waiver that would allow President-elect Joe Biden's pick of retired Gen. Lloyd Austin to head the Defense Department, the first nominee to encounter resistance from senators in the incoming President's own party.

A number of top Democrats praised Austin's service and credentials, and the historic nature of his pick, since he would be the first African American to run the department.

But some of Biden's closest allies were squeamish -- if not outright opposed -- to granting a waiver from a law requiring a secretary to wait seven years from active duty service to take the top civilian post, something only granted twice before in history and would be needed again since Austin retired in 2016.

The early resistance was a sign that Biden and his team will need to lobby their party to fall in line behind the historic pick with a narrowly divided Senate and little margin for error next year.

"It is exciting and historic but I believe that a waiver of the seven-year rule would contravene the basic principle that there should be civilian control over a nonpolitical military," said Sen. Richard Blumenthal, a Connecticut Democrat and member of the Armed Services Committee. "The principle is essential to our democracy."

Blumenthal added: "I will not support the waiver."

Other Democrats voiced similar concern after Congress granted a waiver for Trump's first defense secretary, James Mattis, to serve in 2017.

Sen. Elizabeth Warren, a Massachusetts Democrat and member of the Senate Armed Services Committee, praised Austin's credentials and said that she looks forward to meeting him.

"I understand the importance of civilian control," said Sen. Mazie Hirono, a Hawaii Democrat who sits on the Armed Services Committee. "So I have some concerns about being asked to doing a waiver."

Sen. Jon Tester, a Montana Democrat, who opposed the waiver for Mattis, said he would do so again for Austin.

And New Mexico Sen. Martin Heinrich, a member of the committee, said he's "open-minded" about the nomination but expressed reservations as well.

"I just think to the extent that this administration can get back to doing things in a way that our country historically has we'll be well served by that," Heinrich said.

Even so, there are signs that some Democrats may put their concerns behind them if they are pleased with Austin's testimony.

Indeed, some are showing signs of softening their opposition to granting waivers.

In 2017, Rhode Island Sen. Jack Reed, who is the top Democrat on the Senate Armed Services Committee, voted for the waiver but said that "waiving the law should happen no more than once in a generation."

Reed added at the time: "I will not support a waiver for future nominees."

On Monday, Reed seemed to take a softer approach.

"I feel, in all fairness, you have to give the opportunity to the nominee to explain himself or herself," Reed said when asked if he felt pressure to support his party leader's nominee.

Asked why he would be open to voting for the waiver again after having expressed a desire not to do so after Mattis, Reed said: "I don't think they're that different. One of the reasons that we were able to reach the position on the waiver is General Mattis had the opportunity to testify and, you know, made some compelling arguments."

Reed added: "He's a very qualified general officer. I've known him for a long while, combat leader. So, you know, he brings a lot to the Department of Defense."

"I would prefer we didn't need the waiver, but I'm not averse to it -- but I think it should be rare."

Biden could have some backing on the GOP side.

The Senate Armed Services Chairman, Republican Sen. Jim Inhofe of Oklahoma, said he didn't know Austin "that well" but he added: "I always support waivers. Because I don't believe that we should have the seven years in there anyway."