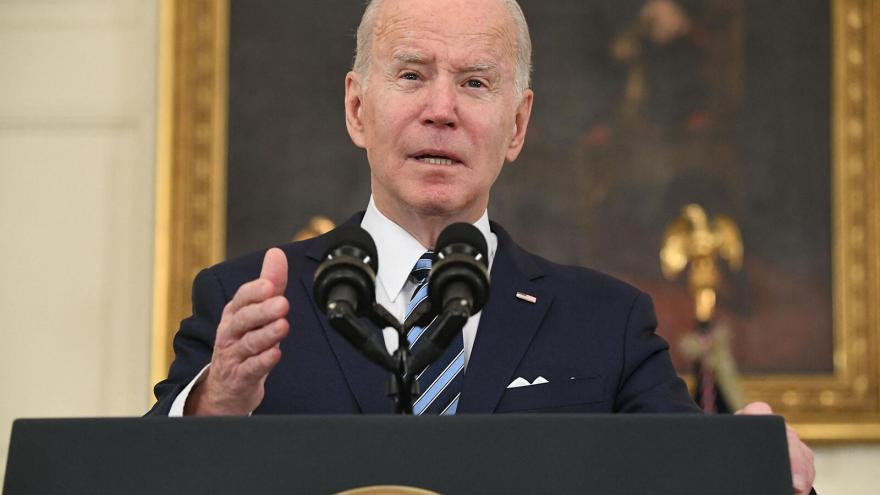 President Joe Biden will make the case that lowering prescription drug prices will ease one of the largest financial burdens American families face and will ultimately lead to more Americans working, the sky-high inflation rate coming down and the nation's deficit being reduced, a White House official told CNN.

(CNN) -- President Joe Biden will make the case on Thursday that lowering prescription drug prices will ease one of the largest financial burdens American families face and will ultimately lead to more Americans working, the sky-high inflation rate coming down and the nation's deficit being reduced, a White House official told CNN.

Biden is scheduled to travel to Virginia to deliver remarks highlighting his administration's efforts to lower health care costs and prescription drug prices -- a key piece of his massive economic and climate package currently on ice on Capitol Hill.

"Americans are forced to pay two to three times more for drugs than citizens in other advanced economies," the official said, previewing some of the points the President is expected to make in his speech. "That is flat out wrong, and we need to act together to stop the abuse of American families at the hands of big pharmaceutical companies."

The legislation's main proposal revives the Democrats' effort to allow Medicare to negotiate drug prices. It would empower the agency to negotiate the prices of certain costly medications administered in doctors' offices or purchased at the pharmacy -- up to 20 medications starting in 2028. It's a far more limited proposal than the one House Democratic leaders have supported in the past.

The official argued allowing Medicare to negotiate drug prices will "not only save families money directly, it will also reduce taxpayer expenses through Medicare, making it a win-win-win."

"Unfortunately, every Republican in Congress opposes doing this, because they think the enormous tax breaks they gave to the wealthiest Americans and to big corporations -- including to pharmaceutical companies -- are more important," the official continued. "But the American people know better."

Secretary of Health and Human Services Xavier Becerra will also appear alongside the President on Thursday and is expected to deliver remarks. This comes after the nation's top health official told CNN he is looking to step into a bigger public role following accusations he's been largely absent during the coronavirus pandemic.

The event will take place at a community college in Democratic Rep. Abigail Spanberger's swing district. Spanberger is up for reelection this fall, and Democrats are trying to hold on to their majorities in the House of Representative and the Senate.

Democrats, including Biden, have long campaigned on lowering drug prices. Their latest attempt came as part of the party's massive social safety net bill, Build Back Better, which is the cornerstone of Biden's domestic agenda.

In addition to allowing Medicare to negotiate the prices of certain costly medications, Build Back Better would also impose penalties if drug companies increase their prices faster than inflation. And it would redesign Medicare's Part D drug plans so that seniors and people with disabilities wouldn't pay more than $2,000 for medications bought at the pharmacy. The bill would also cap what Americans pay for insulin at $35 a month.

About 10 fewer drugs would be introduced in the US market over the next three decades if the bill were enacted, the Congressional Budget Office projects. About 1,300 drugs are expected to be approved over that time period under current law, the agency said.

The bill also calls for blocking the implementation of a Trump administration regulation that would change the drug industry's rebate system, though it isn't set to go into effect until 2026. The rule effectively would ban drug makers from providing rebates to pharmacy benefit managers and insurers. Instead, drug companies would be encouraged to pass the discounts directly to patients at the pharmacy counter.

Altogether, the prescription drug measures would save around $297 billion, including about $79 billion from allowing Medicare to negotiate drug prices, according to the CBO. Prior House efforts to permit drug price negotiations would have saved far more.

Though Build Back Better negotiations have been at a standstill since Democratic Sen. Joe Manchin of West Virginia said in December that he could not support it, a coalition of more than 90 organizations representing patients, consumers, employers, unions, doctors, seniors and others have been pressuring senators to advance the drug price measures. Meanwhile, House Democrats and Sens. Bernie Sanders, oindependent of Vermont, and Amy Klobuchar, a Minnesota Democrat, introduced legislation Wednesday that would enable Medicare to pay the same prices for drugs as the Veterans Administration, which is allowed to negotiate.

Biden railed against the high cost of drugs in a speech in August, where he also pushed for allowing Medicare to negotiate prices. His administration released a 29-page blueprint the following month that cites lack of competition as a chief factor behind high drug costs.