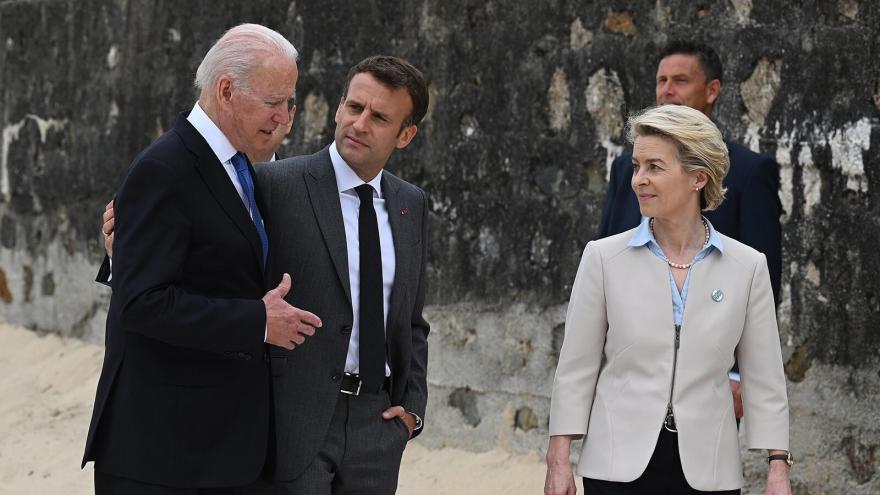 President Joe Biden is set to hold his first conversation with French President Emmanuel Macron on Sept. 22 after a major diplomatic crisis exploded between the men over a deal to provide Australia with nuclear-powered submarines.

(CNN) -- President Joe Biden spoke for the first time Wednesday with French President Emmanuel Macron after a major diplomatic crisis exploded between the two longtime allies over a deal to equip Australia with nuclear-powered submarines.

In the 30-minute call, Biden appeared to acknowledge missteps in how the United States approached the talks. A joint statement between the United States and France afterward said Macron and Biden "agreed that the situation would have benefitted from open consultations among allies on matters of strategic interest to France and our European partners."

"President Biden conveyed his ongoing commitment in that regard," the statement said.

The rare, if indirect, admission of error was a signal of how seriously both sides are taking the diplomatic dispute, which has led to the lowest point in relations between the United States and France since the "Freedom Fries" era at the start of the Iraq War.

In their call, Biden and Macron agreed to meet in person at the end of next month in Europe. Biden had already planned to attend a Group of 20 summit in Rome at the end of October and an official said the assumption is that the meeting between the two leaders will take place there.

"The two leaders have decided to open a process of in-depth consultations, aimed at creating the conditions for ensuring confidence and proposing concrete measures toward common objectives," the statement read.

Macron also agreed to return his ambassador to Washington after recalling him for consultations in Paris. And Biden voiced support for "the importance of a stronger and more capable European defense," a longtime priority for Macron.

The talks were expected to be tense, though the White House said afterward the tone was "friendly" between the two leaders. Press secretary Jen Psaki said it was important for Biden to directly convey his belief that "there could have been more of a discussion" ahead of the submarine announcement. She stopped short of saying Biden apologized for what transpired.

Macron had mostly withheld comment publicly on the dispute, waiting to air his rage directly to Biden. But other officials in his government have spared nothing in describing France's shock and fury at the submarine agreement, which deprived France of a major contract of its own and left Paris feeling excluded and diminished.

Biden himself has ignored all questions on the France dispute since the crisis erupted at the end of last week, but officials said he was surprised by the outsized reaction from Paris and wanted to smooth things over with his counterpart, aiming to lower the temperature over the phone.

Psaki said the White House would look to identify how the breakdown occurred, but avoided saying Biden blamed any individual for what transpired.

"He holds himself responsible," she said. "Certainly, though, he has a responsibility to talk to his team always about how we can best manage our diplomatic relationships and that's what he does in any scenario."

Before the two presidents spoke, French officials laid out a lengthy list of expectations for the telephone call, which occurred mid-morning Washington time. An official at the Élysée, the French presidential office, said Macron expected Biden to offer clarification for how the deal came together without consultations with the French.

Biden requested the call with Macron over the weekend as tensions simmered over the surprise submarine deal, which was viewed as a significant strategic move to counter China in the region. The French informed the White House on Friday that Macron's ambassador in Washington, Philippe Etienne, was being recalled to Paris for consultations.

The French were quick to announce Biden's request for a phone call publicly, and the White House confirmed the two men were trying to connect. American officials said Biden wanted to speak soon with Macron about the "way forward."

"We understand the French position," a senior US administration official said Monday. "We don't share their view in terms of how this all developed."

While Biden met in person on Tuesday with the prime ministers of Australia and the United Kingdom, he did not have any in-person meetings with Macron on the books until they spoke on Wednesday.

The French President did not travel to this week's United Nations General Assembly in New York, a decision based in pandemic concerns that predated the submarine spat.

Australian Prime Minister Scott Morrison said Tuesday he would not speak with Macron during the UN this week.

"That is not an opportunity for that at this time. I'm sure that opportunity will come in time. But right now, I understand the disappointment," Morrison said.

And British Prime Minister Boris Johnson appeared to make light of France's outrage during an interview outside the US Capitol in Washington.

"I just think it's time for some of my dearest friends around the world to prenez un grip about this and donnez moi un break," Johnson said, using a bit of Franglish to suggest France may be overreacting. He called the agreement a "fundamentally a great step forward for global security."

Biden wasn't likely to similarly diminish the French concerns, at least in public. Still, some American officials said they believed France was being overly dramatic in its response to the submarine deal and have noted Macron is set to compete for reelection in the coming months.

France has reacted with intense indignation over the agreement between the United States, Australia and the United Kingdom to create a new defense alliance focused on security in Asia. The foreign minister, Jean-Yves Le Drian, said Biden's actions recalled something his predecessor, Donald Trump, might have done but "without the tweets."

The move has also opened a new fissure in the Western alliance and sparked growing public criticism from other European officials. Thierry Breton, the EU commissioner for internal markets, said in an interview with CNN on Monday that "something is broken between our relations in Europe and the US."

In an exclusive interview with CNN on Monday, European Commission President Ursula von der Leyen said "a lot of questions" must be answered when it comes to the breakdown of the French-Australian submarine deal.

France stands to lose the equivalent of $65 billion US dollars from an existing deal to provide Australia with conventional, diesel-powered submarines. The canceled deal is expected to make a significant economic impact on the French defense sector. France also stands to lose out strategically in the Indo-Pacific, where the country holds significant interests.

But more broadly, the announcement triggered anger in France at being left out of sensitive discussions over the new pact, which they said amounted to a stab in the back. American, Australian and British officials had been in highly secret talks for months over a plan to share technology for nuclear powered submarines, a process that was hatched more than a year ago and accelerated after Biden took office in January.

Officials familiar with the matter said the discussions were kept exceedingly quiet, even within their own governments, given the sensitive nature of the technology, the prospect for angering China and the belief that any word leaking out could potentially scuttle the entire thing. The process "was undertaken with a high degree of discretion," a senior administration official said.

Talks proceeded at the staff level over the course of the spring before the issue was raised in a meeting between Biden, Morrison and Johnson on the sidelines of the Group of 7 summit, held in June on the English coast. There was no public disclosure of the submarine deal at the time.

Biden met Macron on the same day — their only in-person one-on-one to date — and the two men appeared to get on well: cameras caught them wrapping their arms over each other's shoulders as they walked from the beach to the summit venue. Officials said talks between the men, which occurred on a sunny deck overlooking Carbis Bay, seemed cordial. But the brewing submarine deal never came up, according to US and French officials.