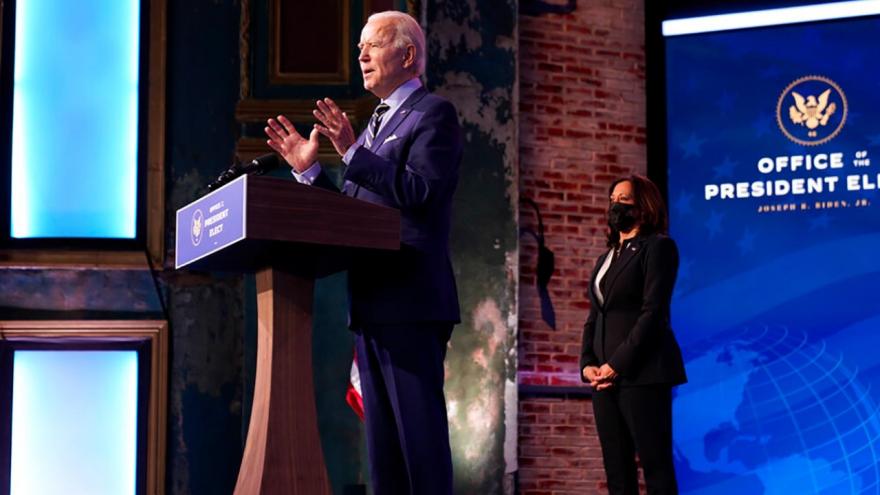 (CNN) -- President-elect Joe Biden's inaugural committee will promote the national day of service on Martin Luther King Jr. Day as part of festivities ahead of the inauguration on January 20.

The President-elect, his wife Jill Biden, Vice President-elect Kamala Harris and her husband Doug Emhoff are expected to participate in the day of service on January 18, a committee official said, though the details for their events were not immediately available.

The committee plans to work with organizations on the state, local and national level as well as service leaders and members of various communities to organize events. Organizers said the events will focus on providing Covid-19 relief and addressing issues highlighted by the pandemic, including "poverty, hunger, racial injustice, homelessness, mental health and educational disparities."

"President-elect Biden and Vice President-elect Harris are empathetic leaders who know the crisis millions of American families are facing," Tony Allen, CEO of the inaugural committee, said. "And like Dr. King, they know that we must have a shared commitment — in word and in deed — to bring the nation together in service to others."

The inaugural committee will encourage the majority of events be held in a virtual format, but there may be some limited in-person events, which would follow health and safety protocols because of the pandemic, organizers said.

Biden's inaugural committee's call to service follows in the footsteps of President Barack Obama's own inaugural committees, which asked Americans to participate in the day of service as part of festivities in 2009 and 2013. President Bill Clinton signed the King Holiday and Service Act in 1994, establishing MLK Day as a national day of service. President George W. Bush and Obama often participated in service projects on the holiday in the years that followed.

The national day of service is one of several events the committee is planning in the lead up to Inauguration Day. Last week, the committee announced it would host a national memorial to remember and honor lives lost to Covid-19 on January 19. It is encouraging cities and towns across the country to participate, and the event will include a lighting ceremony at the Lincoln Memorial Reflecting Pool in Washington, DC.

Many of this year's traditional inaugural festivities will be scaled back due to the coronavirus pandemic. The President-elect and vice president-elect will take their oaths of office at the US Capitol, but the ceremony's footprint will be "extremely limited." The inaugural committee has encouraged the public not to travel to Washington, DC, and instead to participate in the inaugural festivities from their home bases.

The committee announced Sunday that it is forgoing a traditional in-person inaugural parade, opting instead for a "virtual parade across America." The President-elect will receive a presidential escort from 15th Street to the White House, which will feature every branch of the military.