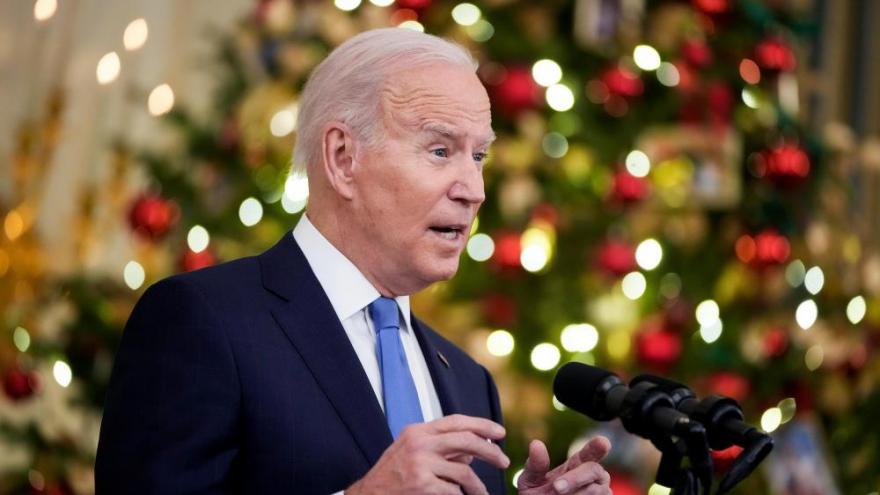 President Joe Biden insisted that he and Democratic Sen. Joe Manchin will "get something done" on the Build Back Better Act after Manchin defied his party by torpedoing the key piece of Biden's domestic agenda.

(CNN) -- President Joe Biden on Tuesday insisted that he and Democratic Sen. Joe Manchin will "get something done" on the Build Back Better Act after Manchin defied his party by torpedoing the key piece of Biden's domestic agenda.

"Some people think maybe I'm not Irish because I don't hold a grudge. But I want to get things done," said Biden, when asked whether the West Virginia Democrat broke a commitment to him. "I still think there's a possibility of getting Build Back Better done."

The President also told reporters he had been "told (Manchin) was speaking to the liberal caucus in the House and said, 'Joe Biden didn't mislead you, I misled you.'" It was unclear what meeting Biden was referring to.

CNN has reached out to Manchin's office for comment on Biden's remarks.

Manchin announced Sunday that he could not support Biden's Build Back Better plan, a sweeping economic and climate bill that required his support in order for it to pass in the Senate, where Democrats have an ultra-slim majority. "I cannot vote to continue with this piece of legislation. I just can't. I've tried everything humanly possible. I can't get there," he told Fox News. "This is a no on this legislation. I have tried everything I know to do."

The move stoked widespread outrage among progressives, many of whom questioned his allegiance to the party and wondered if he might drop his affiliation after he thwarted one of Democrats' major legislative priorities.

Manchin also indicated on Monday that he would not quickly get behind a scaled-back version of the plan, arguing that it should instead go through the committee process before trying to move it through the Senate via the filibuster-proof reconciliation process. That position foreshadows grim prospects for Biden's hopes of getting even a narrow plan through Congress.

Still, the President insisted Tuesday there's a path forward for the legislation as he touted it as an important tool to fight rising inflation and address the cost of medicine.

"I'm not joking about this. Imagine being a parent looking at a child, and you can't afford -- you have no house to borrow against, you have no savings. It's wrong. But all the things in that bill are going to reduce prices and costs for middle class and working class people. It's going to reduce their costs," he said.