Biden looking to open up Obamacare subsidies to more families 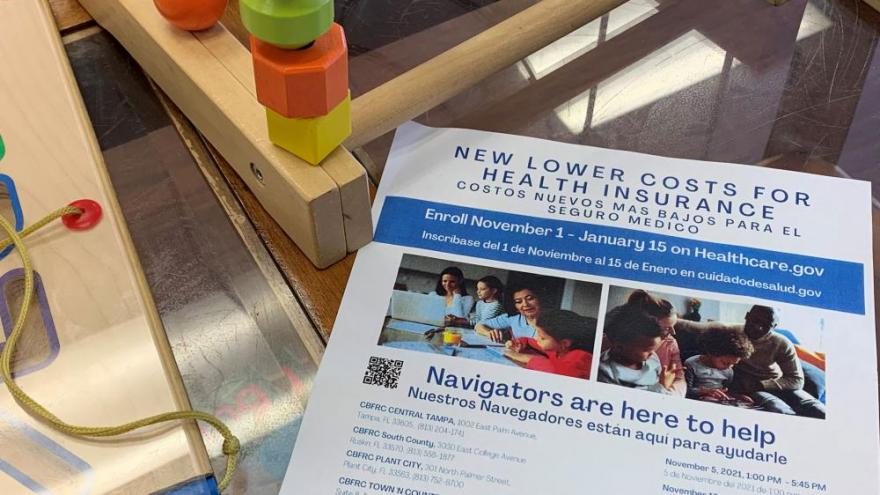 A flyer for enrollment in the Affordable Care Act health insurance marketplace seen at the Children's Board Family Resource Center in Brandon. A record 2.7 million Floridians signed up for health insurance this year through the program, also known as Obamacare.

(CNN) -- More families would be able to access Affordable Care Act subsidies next year, under a rule proposed by the Biden administration Tuesday.

The announcement comes as former President Barack Obama returns to the White House for his first public appearance since he left office to celebrate record enrollment in Affordable Care Act policies with President Joe Biden. Obama, Biden and Vice President Kamala Harris are scheduled to speak at an event Tuesday afternoon.

The proposed rule seeks to address a longstanding problem with Obamacare's regulations pertaining to the affordability of employer coverage, known as the "family glitch."

Under the health reform law, workers who don't have "affordable" health insurance options through their jobs can qualify for subsidized coverage on the Obamacare exchanges. A work-based policy is considered "affordable" if it costs the employee less than roughly 10% of his or her income for single coverage.

However, the law doesn't take into account the increase in premiums for adding family members to the policy, even if it pushes the cost above the threshold. In these cases, workers and their families aren't eligible for financial assistance to buy Affordable Care Act coverage.

The average annual premium for a single worker was just over $7,700 in 2021 but topped $22,000 for a family, according to the Kaiser Family Foundation.

Some 5.1 million Americans, a majority of them children, are affected by the family glitch, according to Kaiser.

The proposed rule would allow family members of workers who are offered affordable single coverage but unaffordable family policies to qualify for subsidies on the Obamacare exchanges.

An estimated 200,000 uninsured Americans would gain coverage, and nearly 1 million people would see reductions in premiums, according to the White House. Many families would be able to save hundreds of dollars a month.

If finalized, the rule would go into effect in January 2023.

The White House declined to comment on the cost of eliminating the family glitch, but the Congressional Budget Office has previously pegged it at $45 billion over 10 years.

Biden and Obama are expected to tout the surge in interest in Affordable Care Act policies this year. A record 14.5 million people signed up for 2022 coverage during open enrollment -- lured in part by enhanced federal subsidies.

The Democrats' $1.9 trillion coronavirus relief package, which was enacted in March 2021, has temporarily made the subsidies more generous and opened them up to more middle class Americans. It also allows lower-income Americans to sign up for Obamacare coverage with $0 premiums on the federal exchange outside of the open enrollment period.

Biden is expected to sign an executive order Tuesday directing federal agencies to continue doing everything they can to expand affordable, quality health coverage, including making it easier for people to understand their options and to enroll in and keep their policies.

The historic gains in Affordable Care Act and Medicaid coverage may be short lived, however.

Unless Congress acts, the enhanced subsidies will not be available for 2023 policies on the Affordable Care Act exchanges. The Democrats' plan to extend the provision as part of their Build Back Better spending package was thwarted last year when Democratic Sen. Joe Manchin of West Virginia said he would not support it.

And Medicaid enrollment has swelled in large part because states have not been allowed to remove anyone involuntarily from coverage during the pandemic in exchange for a more generous federal Medicaid match, under a coronavirus relief package Congress passed in 2020. However, states will resume checking residents' eligibility once the public health emergency ends, which could be as early as July.

An estimated 14.4 million people could lose Medicaid coverage if the public health emergency expires after the second quarter of this year, according to the Urban Institute.