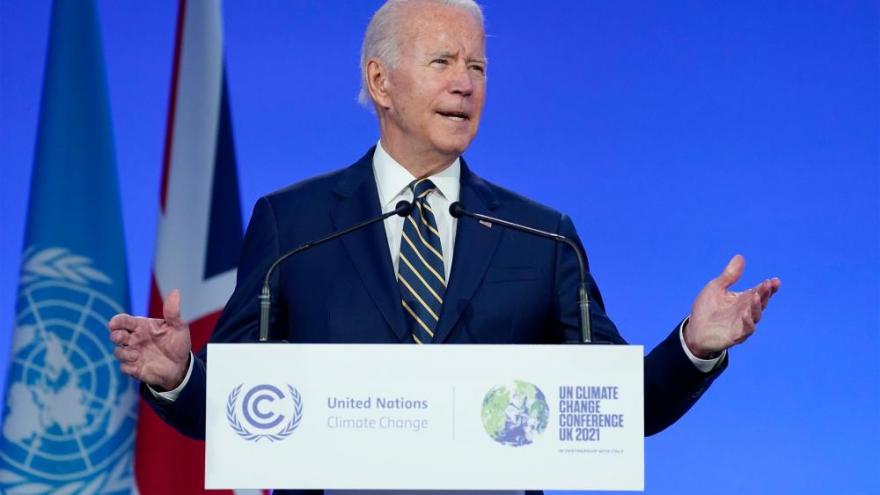 President Joe Bide, seen here on November 1 in Glasgow, Scotland, is spending the final day of his trip to the climate summit focusing on methane emissions and forests events.

(CNN) -- President Joe Biden is spending his final day of his trip to Europe making the case for democracies to lead the way on fighting the climate crisis and announcing new climate-related initiatives at the United Nations summit in Glasgow.

During a meeting on the margins of the summit regarding climate aspects of his Build Back Better World (B3W) initiative, the President argued that the collective effort by western nations to support infrastructure in the developing world is a chance to prove democracy can still deliver.

The B3W program was announced in June at the G7. It is meant to counter China's Belt and Road initiative.

"We offer a positive alternative to debt traps and corruption. We can hold entire countries back if we don't do that. Transparency is critically important. And by assisting and responding to the needs of developing countries, rather than dictating projects from afar, we can deliver the greatest impact for those who need it the most," Biden said. "We have to show -- and I think we will show -- that democracy is still the best way for delivering results."

Biden said there's an "urgent need for infrastructure development in countries ... that prioritizes the fight against climate change from the moment the spade goes into the ground and jumpstarts green, economic growth."

"By coming together to make a difference in the lives of people all around the world, you have to show -- and I think we will show -- that democracy is still the best way for delivering results," he added.

Earlier Tuesday, Biden launched a new plan to conserve forests worldwide that aims to bring together diplomatic, economic and policy tools to promote preservation of forests around the world.

The issue of keeping important ecosystems alive is an "indispensable piece of keeping our climate goals within reach," the President said.

Biden cited forests' ability to capture carbon and promote biodiversity as reasons to place attention on the issue, in addition to reducing emissions.

"We need to approach this issue with the same seriousness as decarbonizing our economies. That's what we're doing in the United States," Biden said.

The President also delivered brief remarks at an event to highlight the progress of the Global Methane Pledge and launched a new initiative to ratchet up methane reduction efforts, which he argued were the "most important things we can do" to keep global temperatures in check.

Around 100 countries have signed up to a global pledge to cut methane emissions by 30%, European Commission President Ursula von de Leyon announced on Tuesday.

Biden encouraged other countries to join the US in the efforts.

"This isn't just something we have to do to protect the environmental future. It's an enormous opportunity ... for all of us, all of our nations, to create jobs and make meaningful climate goals a core part of our global economic recovery as well," he said.

The Biden administration is proposing new rules from a number of federal agencies to slash methane emissions, which includes a regulation from the Environmental Protection Agency that would push oil and gas companies to more accurately detect, monitor and repair methane leaks from new and existing wells, pipelines and other equipment.

During a speech at an event aimed at "Accelerating Clean Technology Innovation and Deployment", the President announced the First Movers Coalition. Biden said the federal government will work with the coalition, which includes more than two dozen of the world's largest companies across eight different sectors "that comprise 30% of the global emissions we now are dealing with."

"These companies will be critical partners in pushing for commercially viable alternatives to decarbonize the industrial cities, industrial sectors and more. And while championing the US innovation of good paying jobs, at the same time, the US government is going to use our enormous market power, as the world's largest buyer of goods and services ... to do the same," he said.

The goal of the coalition is to spur better products into the market, new companies and new projects.

He said the US was also launching a new partnership with the United Arab Emirates called the Agricultural Innovation Mission for Climate. Along with 75 partners, the mission aims to "catalyze public and private investment in climate-supported agriculture and food system innovation."

The President will also hold a press conference later Tuesday -- his second press conference of the trip. He then departs Scotland Tuesday evening, and arrives back in Washington early Wednesday.

Biden has spent five days in Rome and Glasgow to attend the earlier Group of 20 meeting and the climate summit.