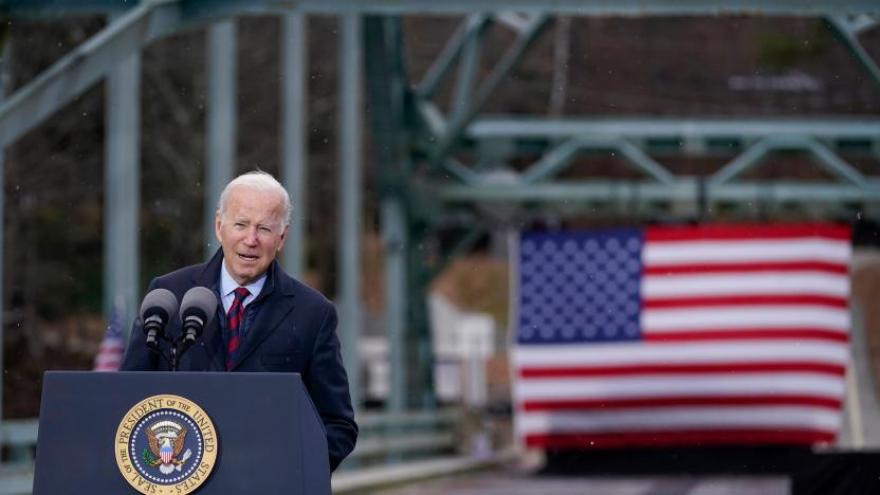 President Joe Biden marked Transgender Day of Remembrance in a statement on November 20, paying tribute to "those we lost in the deadliest year on record for transgender Americans."

(CNN) -- President Joe Biden marked Transgender Day of Remembrance in a statement Saturday, paying tribute to "those we lost in the deadliest year on record for transgender Americans."

In a statement shared with CNN, Biden also remembered "the countless other transgender people -- disproportionately Black and brown transgender women and girls -- who face brutal violence, discrimination, and harassment."

Transgender Day of Remembrance caps off Transgender Awareness Week, and memorializes victims of anti-transgender violence across the country. Earlier this month, the Human Rights Campaign declared 2021 the deadliest year on record for transgender and nonbinary people, with at least 45 transgender or gender-nonconforming people killed.

In a tweet marking that solemn milestone, White House principal deputy press secretary Karine Jean-Pierre called the news "unacceptable," writing: "Our hearts are with all who knew and loved the 45 people who have been killed this year. The march to end this epidemic of violence continues."

In his statement, Biden called on the Senate to pass the Equality Act, which amends the 1964 Civil Rights Act to protect people from being discriminated against based on sexual orientation and gender identity, "so that all people are able to live free from fear and discrimination." The bill passed the House in March but has stalled in the Senate.

"In spite of our progress strengthening civil rights for LGBTQI+ Americans, too many transgender people still live in fear and face systemic barriers to freedom and equality," Biden wrote.

The administration also released a report Saturday from the first Interagency Working Group on Safety, Opportunity, and Inclusion for Transgender and Gender Diverse Individuals, which is made up of representatives from the US Agency for International Development, the Departments of State, Justice, Housing and Urban Development, Health and Human Services, Education, Homeland Security, Labor, Interior and Veterans Affairs, the Equal Employment Opportunity Commission and the US Interagency Council on Homelessness.

President Barack Obama's White House regularly acknowledged Transgender Day of Remembrance and met with activists to discuss violence against the community. That practice did not continue under President Donald Trump.

Biden's statement is the latest in a series of moves by the administration to show support for LGBTQ+ Americans, including reversing his predecessor's ban on transgender Americans in the military, reinstating a special envoy for LGBTQ rights after the position lapsed under Trump and issuing the first presidential proclamation marking Transgender Day of Visibility in March. The President drew praise from LGBTQ advocates for his remarks pledging support for transgender Americans during his first address to a joint session of Congress in April, while first lady Jill Biden invited Stella Keating, a teenage transgender advocate who testified before Congress in support of the Equality Act, as her virtual guest for the address.

While violence against transgender Americans is at an all-time high, 2021 has also marked a record year for anti-transgender legislation, with state legislatures introducing 100 bills across 33 states aimed at curbing the rights of transgender people.

The majority of bills would affect transgender youth, a group that researchers and medical professionals warn is already susceptible to high rates of suicide and depression.??

"To ensure that our government protects the civil rights of transgender Americans, I charged my team with coordinating across the federal government to address the epidemic of violence and advance equality for transgender people. I continue to call on state leaders and lawmakers to combat the disturbing proliferation of discriminatory state legislation targeting transgender people, especially transgender children," Biden wrote in Saturday's statement. "Today, we remember. Tomorrow -- and every day -- we must continue to act."