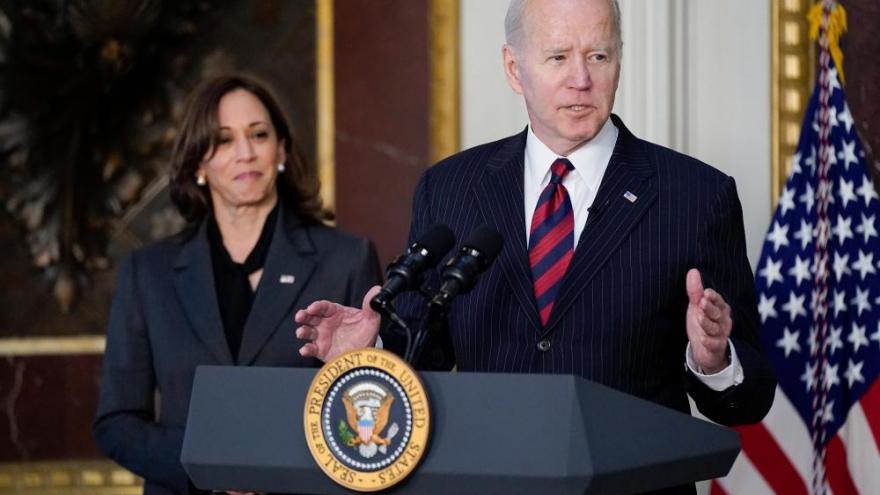 (CNN) -- President Joe Biden marked the long-stalled reauthorization of the Violence Against Women Act with an event at the White House on Wednesday, celebrating its passage and underscoring that more still needs to be done to combat domestic violence.

"It took time to change the culture, and you did it. You did it," Biden said to an audience of lawmakers, administration officials and advocates. "The only way we can change the culture was by shining an ugly, bright light on it and speaking its name."

The landmark law is aimed at protecting and supporting survivors of domestic violence, sexual assault and stalking. Biden helped write the original piece of legislation that was enacted in 1994 when he was a senator from Delaware and has long been a champion of the law.

The President also thanked those in the room for their "courage, for being a hero, sharing your powerful voices and standing up for thousands of women."

After acknowledging the law's continued improvements over the years, Biden concluded his remarks by emphasizing that more must be done to address abuse.

"No one, regardless of gender or sexual orientation, should experience abuse. Period. And if they do they should have the service and support to get through it, and we're not going to rest," Biden said.

Attendees at the White House event included Attorney General Merrick Garland, Secretary of Health and Human Services Xavier Becerra, several members of the US House and Senate, CEO and President of the National Coalition Against Domestic Violence Ruth Glenn and actress and activist Angelina Jolie.

The legislation requires renewal every five years, and it lapsed several years ago largely due to a partisan disagreement over whether to ban dating partners and stalkers convicted of domestic violence from owning firearms. The current law bans a spouse convicted of domestic violence from purchasing or possessing a firearm, but Democrats have long sought to close the so-called boyfriend loophole and extend that rule to dating partners. Republicans and the National Rifle Association are strongly opposed to such a provision.

After several years of failed attempts at reauthorizing the legislation, a bipartisan group of senators announced last month they had reached a deal and that the "boyfriend loophole" provision had been dropped. Senate Majority Whip Dick Durbin, a Democrat from Illinois, said at the time that it was a "tough choice" to agree to drop it but that it simply did not have the votes needed to pass.

In his remarks on Wednesday, the President lamented the legislation's delayed authorization, saying, "The idea that this took five years to reauthorize ... I was out of office those years."

The reauthorization of the law was included in a massive spending bill that Biden signed into law on Tuesday. The legislation will fund the federal government through September and provide $13.6 billion in additional aid to Ukraine as the country fights back against Russia's invasion.

"The VAWA Reauthorization Act of 2022 will expand prevention efforts and protections for survivors, including those from underserved communities, and will provide increased resources and training for law enforcement and our judicial system," Biden said in a statement last month when the bill was introduced. "It will strengthen rape prevention and education efforts, support rape crisis centers, improve the training of sexual assault forensic examiners, and broaden access to legal services for all survivors, among other things."

Biden on Tuesday touted the reauthorization of VAWA at the spending bill signing, saying that he "law has saved lives, and that's helped women rebuild their lives and make children a heck of a lot safer."

"Tribal courts will now be able to exercise jurisdiction over non-Native perpetrators of sexual assault and sex trafficking," Biden said. "And we're providing more support for legal services and for law enforcement to get the training they need to help handle the trauma survivors are experiencing."