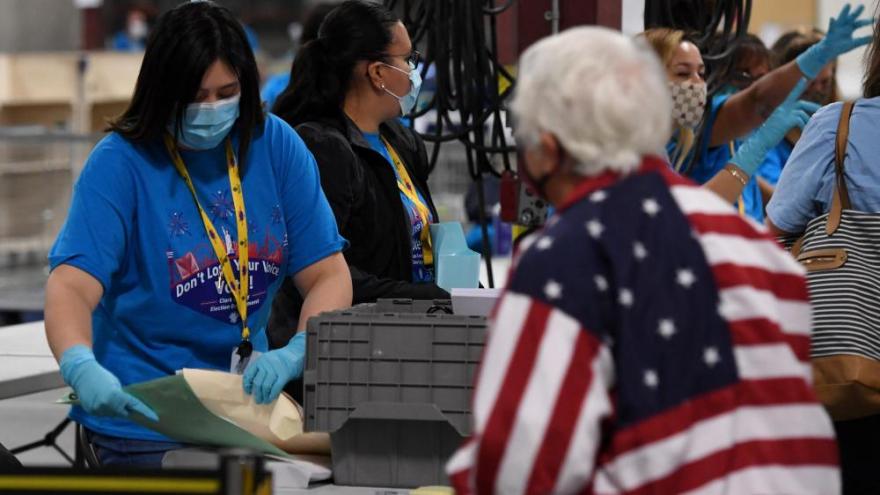 (CNN) -- Former Vice President Joe Biden has moved to within 17 electoral votes of claiming the presidency by winning the state of Michigan, CNN projects, in the latest twist of a dramatic election clash with President Donald Trump that has left America's political fate uncertain hours after polls closed.

His breakthrough came as Trump's campaign launched a flurry of lawsuits in several states designed to stop the former vice president from getting over the line, including challenging Pennsylvania's vote count at the Supreme Court.

Biden's victory in Michigan means he has now captured two-thirds of the vaunted "blue wall" in the Midwest and Pennsylvania that paved Trump's path to victory four years ago. If Biden holds his leads in Nevada and Arizona, where counts have yet to be completed, he will have sufficient Electoral College votes to be the 46th president. The Biden camp is also confident of overtaking Trump in another key battleground state, Pennsylvania, where hundreds of thousands of mail-in and early absentee votes, which are expected to favor the Democrats, are still being counted.

But the Trump campaign plans to ask the court to intervene in a case challenging a Pennsylvania Supreme Court decision that allowed ballots to be counted after Election Day. The justices had refused to expedite the appeal before the election, and are considering whether to take up the case.

Biden holds a 253-213 lead in the Electoral College. A candidate must reach the 270 mark to win the presidency. Races in Arizona, Georgia, Nevada, North Carolina and Pennsylvania are too close to call. In many cases, the tight races could depend on the counting of absentee and mail-in ballots, which tend to disproportionately favor Democrats.

In a brief statement Wednesday afternoon, Biden said his campaign was on track to win 270 electoral votes but that he was not declaring victory until the count was completed in key states. He said he was encouraged by the extraordinary turnout in the election and dismissed Trump's attempts to undermine the results.

"Here, the people rule. Power can't be taken or asserted," Biden said, in a speech in which he tried to create the aura of a winner and pledged to bring the country together and to work for national healing as president.

Trump hasn't appeared in public since his brazen and false claim of victory in the early hours of Wednesday morning in which he demanded that legally cast ballots in contested states where he may fall behind not be counted.

Overnight, Biden made a late surge to victory in another vital state, Wisconsin, again based on mail-in and early votes that were counted after most of the ballots cast in person on Election Day. But the Trump campaign said Wednesday afternoon that it will demand a recount and the campaign says it is also mounting legal challenges in Michigan.

"The President is well within the threshold to request a recount (in Wisconsin) and we will immediately do so," Trump campaign manager Bill Stepien said in a statement.

Stepien noted that results show "a razor thin race as we always knew that it would be" and claimed that there were irregularities in several Wisconsin counties, but did not specify what the campaign believes those irregularities are.

In essence, the Trump campaign is trying to stop vote counts in states where he is trailing, like Pennsylvania and Michigan, but demanding that all the votes are counted in states where they believe they have of a chance of catching up to Biden, like Arizona and Nevada.

Candidates can request a recount in Wisconsin if they are within 1% of the winner's vote total -- but the recount cannot be formally requested until completion of the canvass, which could be as late as November 17.

It's very rare that a margin of 20,000 votes gets reversed on a recount. But because the margin of Biden's lead is less than 1%, the Trump campaign is well within its rights to request a recount.

While the Trump campaign is advocating that the count should continue in states they believe are favorable to their Electoral College tally, the campaign said in a statement that it has filed a lawsuit in Michigan asking the state to halt its count because it has "not been provided with meaningful access to numerous counting locations to observe the opening of ballots and the counting process, as guaranteed by Michigan law."

Ryan Jarvi, a spokesperson for Michigan Attorney General Dana Nessel, responded to the threat of the lawsuit by saying in a statement that "Michigan's elections have been conducted transparently, with access provided for both political parties and the public."

Trump campaign officials said Wednesday afternoon that they believe the President can hold his lead in Pennsylvania, but they are also suing the commonwealth, claiming that Democratic election officials are "hiding the ballot counting and processing" from Republican poll observers.

Trump Deputy Campaign Manager Justin Clark said the campaign is "suing to temporarily halt counting until there is meaningful transparency and Republicans can ensure all counting is done aboveboard and by the law."

The President is making baseless claims that the election, which had looked more favorable to him late on Tuesday before hauls of early votes started being tabulated, is being stolen from him and demanding that vote counting in some areas should stop. An appearance in the White House East Room in the early hours, in which he falsely claimed victory, represented his most brazen threat yet against the democratic principles that underpin the US political system.

"As far as I'm concerned, we already have won it," Trump said, painting a picture at odds with the true state of the race. Earlier, Biden had warned each side needed to wait for the votes to be counted, saying "we're going to have to be patient until we -- the hard work of tallying the votes is finished."

And while the President has long threatened legal challenges to the election, the voting itself largely passed off peacefully, without violence at polling places or intimidation of people casting their ballots that had been widely feared given, especially given Trump's attempts to discredit voting procedures ahead of time.

But the election did not turn into the wholesale repudiation of the President and his wrecking ball presidency that Democrats had hoped for. Trump demonstrated a remarkable bond with his base of mainly white voters in rural areas and a new connection with groups of Latino voters in some states. He dashed Democratic hopes to seize the red bastion of Texas and pulled off an impressive Florida win where Biden badly underperformed with Hispanic voters.

A blue wave many Democrats were looking for to end Mitch McConnell's GOP Senate majority has so far not been realized, though some key races still undecided. And despite aiming to expand their House majority, Democrats lost several seats and some threatened Republicans clung onto theirs.

America now seems set for hours or even days of uncertainty with vote counts possibly ceding to legal battles in several states at a time when the country is already being rocked by the worst public health crisis in 100 years. While the nation's eyes were on the election on Tuesday, another 1,048 citizens died from Covid-19 -- a disease the President says has all but disappeared -- and from which 232,000 Americans have now perished.

In Pennsylvania, Trump is ahead by just over 300,000 votes, but Pennsylvania Secretary of State Kathy Boockvar told CNN midafternoon Wednesday that more than 1 million ballots are outstanding. Many of those outstanding votes are mail-in ballots that were returned in the heavily Democratic area of Philadelphia.

Pennsylvania's Democratic Gov. Tom Wolf said Wednesday morning the backlog in votes yet to be processed may delay the result so much so that "we may not know the results even today," he said.

Biden has thin leads in Arizona and Nevada. Trump is up by about 68,000 votes in Georgia but several heavily Democratic counties have yet to finish their counts. Mid-morning Wednesday, Secretary of State Brad Raffensperger said about 200,000 votes remain to be counted, including in DeKalb and Fulton counties.

Trump attempted to claim victory in the presidential race in the early morning hours of Wednesday and called for a halt to legitimate vote counting that is underway.

He sought to mislead the country by implying that voters were still casting ballots after the polls closed. But the votes being counted were legally cast. Pennsylvania allows ballots that were postmarked on election day and arrive up until Friday to be counted.

"We want all voting to stop. We don't want them to find any ballots at four o'clock in the morning and add them to the list," Trump said and vowed to take the election to the Supreme Court.

Biden came out to speak before the President near his Wilmington, Delaware, campaign headquarters. While he said he was confident that he would win he did not make a claim of victory.

"It ain't over until every vote is counted," Biden said. "It's not my place or Donald Trump's place to declare who's won this election. That's the decision of the American people."

Even within Trump's short speech, there was a glaring inconsistency in his position as he advocated for votes to continue to be counted in Arizona, a state that he believes is more favorable to him, while expressing anger that one network had called it early. CNN has not projected a winner in Arizona.

"The President's statement tonight about trying to shut down the counting of duly cast ballots was outrageous, unprecedented, and incorrect," she said. "It was unprecedented because never before in our history has a president of the United States sought to strip Americans of their voice in a national election. Having encouraged Republican efforts in multiple states to prevent the legal counting of these ballots before Election Day, now Donald Trump is saying these ballots can't be counted after Election Day either."

Wins for Trump in Florida and Ohio were crucial to keeping open his pathway to win a second term, even though that path was narrowing Wednesday.

Florida Democrats were disappointed by the results in populous southern Miami-Dade County, where Biden underperformed Clinton's mark in 2016.

The Biden deficit in Miami-Dade was evidence that the President made incursions into traditional Democratic support with Latinos.

Miami-Dade has large concentrations of voters of Cuban and Venezuelan descent who tend to be more conservative than other Latino groups and were targeted by the President with claims that Democrats were akin to socialists.

Biden appears to have made significant gains in Arizona where demographic changes have accelerated the state's shift from traditional Republican territory to a potential Democratic pick up. The President's unpopularity and the rapid growth of the state -- from its rising Latino population to the influx of retirees from the Midwest and other parts of the country -- has made its politics more unpredictable, even in just the four years since 2016, when Trump beat Hillary Clinton in the state 49% to 45.5%.

Clinton built up Democratic margins in populous Maricopa County, which includes Phoenix and its suburbs -- and the majority of the state's voters -- and Biden appears to be continuing that trend Tuesday night, with turnout looking strong in that key county.