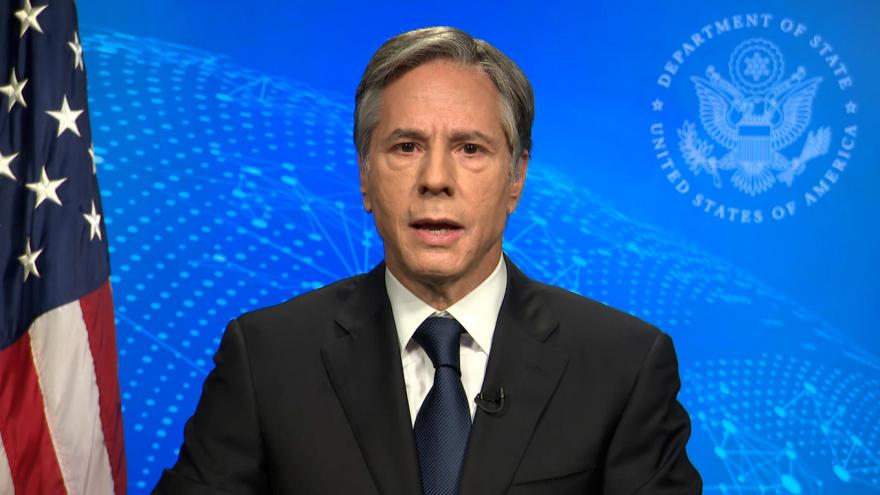 Secretary of State Antony Blinken said that the situation in Afghanistan is different than what happened in Vietnam.

(CNN) -- President Joe Biden and his administration struggled Sunday to project order amid a race by American and other foreign personnel to evacuate Afghanistan as Taliban fighters entered Kabul.

The rapid fall of Afghanistan's national forces and government has come as a shock to Biden and senior members of his administration, who only last month believed it could take months before the civilian government in Kabul fell -- allowing a period of time after American troops left before the full consequences of the withdrawal were laid bare.

Now, months after his initial declaration that all 2,500 US troops would be out of Afghanistan by the end of the summer, a total of 6,000 troops are expected to help facilitate the evacuation.

And officials are frankly admitting they miscalculated.

"The fact of the matter is we've seen that that force has been unable to defend the country," Secretary of State Antony Blinken told CNN's Jake Tapper on "State of the Union," referring to Afghanistan's national security forces. "And that has happened more quickly than we anticipated."

Biden is expected to address the nation in the next few days about the crisis in Afghanistan, according to a senior administration official, though a final decision on a speech hadn't been made and the President hasn't yet cut short his summer vacation visit to Camp David.

One option under discussion is to have Biden return to the White House, though the official cautioned that they had not completely ruled out making the remarks from the presidential retreat, where he was photographed on Sunday receiving a briefing from his national security team. In the photo, Biden appeared alone wearing a polo shirt in front of a large bank of monitors.

The risks for Biden politically are uncertain; a majority of Americans say in polls they support withdrawing troops from Afghanistan, and Biden's aides have calculated the country shares his weariness at prolonging a 20-year conflict.

Yet the chaotic scenes playing out as that war ends -- evoking the fall of Saigon in 1975, an image that haunted Biden as he weighed a withdrawal earlier this year -- are certain to trail Biden as the Taliban asserts control over large swaths of the country.

Already, some members of Congress are demanding more information from the administration on how its intelligence could have so badly misjudged the situation on the ground, or why more robust contingency plans for evacuating Americans and their allies weren't in place.

During a briefing for lawmakers on Sunday, top administration officials faced harsh questioning over the withdrawal plans, including the evacuation of Afghan interpreters and others who assisted the US war effort.

House Minority Leader Kevin McCarthy pushed the officials, including Defense Secretary Lloyd Austin and Chairman of the Joint Chiefs of Staff Gen. Mark Milley, on why the process happened so quickly.

"We didn't give them air cover. You say you had this plan. No one would plan out this outcome. The ramifications of this for America will go on for decades and it won't just be in Afghanistan," McCarthy said, according to a GOP source on the call.

Biden is not scheduled to return to the White House from Camp David until later this week and has not spoken publicly about the situation in Afghanistan since Tuesday. He has no events on his public schedule listed for Sunday.

A range of options are being debated -- about returning to Washington or addressing the nation -- but several officials said events were too fluid and no final decisions have been made as of Sunday afternoon.

While Biden can receive the same level of briefings from Camp David, as he has been doing throughout the weekend via a secure video conference, officials are aware of the optics of the President being out of town during this perilous moment. Several administration officials have also been on vacation, but began returning to work remotely Sunday or in the West Wing.

A White House official told CNN on Sunday that the President "has spoken to members of his national security team on the situation in Afghanistan and will continue to receive updates and be briefed throughout the day."

"He is deeply engaged from Camp David," one senior administration official said, who did not rule out the President returning to the White House.

The notion the civilian government led by former President Ashraf Ghani would be unable to withstand the Taliban's advances is not a surprise. Intelligence assessments over the past year have offered differing timetables for what was viewed by many national security officials as an inevitability.

Biden himself has said repeatedly over the last months, including when Ghani visited him in the Oval Office this summer, that Afghanistan's leaders would need to reconcile their differences if they had any hope of maintaining power.

And Blinken said Sunday that "we've known all along, we've said all along including the President, that the Taliban was at its greatest position of strength at any time since 2001 when it was last in charge of the country. That is the Taliban that we inherited. And so we saw they were very much capable of going on the offensive and beginning to take back the country."

Yet the downfall and collapse of the Afghan military has happened far quicker than Biden or his team expected.

Ghani left the country on Sunday for Tajikistan, two sources told CNN. Afghan Chairman of the High Council for National Reconciliation Abdullah Abdullah referred to him in a video statement as "former President."

American officials have expressed dismay at Ghani's inability to protect key cities and regions from the Taliban, despite laying out a strategy for doing so during his communications with Biden and other senior US leaders.

Biden used a question-and-answer session in the White House East Room a little more than a month ago to downplay the prospect the Afghan government could collapse and the Taliban could take over, saying that outcome was not inevitable. He had insisted there would be "no circumstance" in which American personnel were evacuated from the roof of their embassy, rejecting any comparison to the fall of Saigon.

Last week, the President told reporters there was still a possibility the government could hold up, saying a newly installed military commander was a "serious fighter." And as recently as Friday, the administration said the Afghan capital of Kabul was not in an "imminent threat environment."

By Sunday afternoon, the US completed its evacuation of its embassy in Kabul as Taliban fighters entered the city. CNN had spotted US choppers shuttling employees from the embassy to evacuate them from the country amid the Taliban's advance.

The withdrawal of embassy personnel marks a rapid acceleration of the process that had only been announced on Thursday, and is a situation that many State Department security officials expected would have to happen given the speed with which the Taliban has gained territory in Afghanistan in recent days.

But the administration official said the White House "did not want this to become the Biden administration's Katrina," a reference to the 2005 hurricane that the Bush administration was slow in responding to during his August vacation.

But a Democratic source on the lawmakers' call Sunday said Austin defended the administration's actions as an extension of the timeline for withdrawal initially laid out during the Trump administration. The secretary also said the US maintains the capacity to do air strikes to respond to any Taliban actions that interfere with evacuation.

"We will defend ourselves and our people and any attack on an American will be met with strong and immediate response," he said.

Biden has remained resolute in his plan to withdraw American troops from the country. In a statement Saturday, he said he could not justify keeping US forces there for the indeterminate time it might take to further train the Afghans to defend themselves.

"One more year, or five more years, of U.S. military presence would not have made a difference if the Afghan military cannot or will not hold its own country," Biden wrote in a statement from Camp David, where he is spending an extended long weekend. "And an endless American presence in the middle of another country's civil conflict was not acceptable to me."

In his statement, Biden lay part of the blame for the current situation on his predecessor, Donald Trump, who brokered a deal with the Taliban to withdraw American troops by May 1, 2021. Aides have said remaining much beyond that date would open US forces to attack.

But the President went beyond merely criticizing the deal; he also accused Trump of leaving the Taliban in its "strongest position militarily" since 2001 and mentioned that Trump invited Taliban leaders to meet at Camp David in 2019.

It was a signal that amid torrents of criticism -- from US allies abroad, Republicans, national security experts and human rights groups -- Biden was looking to share the blame for how America's longest war is ending.

Aides say Biden has not shown any inkling of second-guessing himself after announcing in April that all American troops would leave Afghanistan by September 11, a symbolic deadline 20 years after the terror attacks that launched the war to begin with.