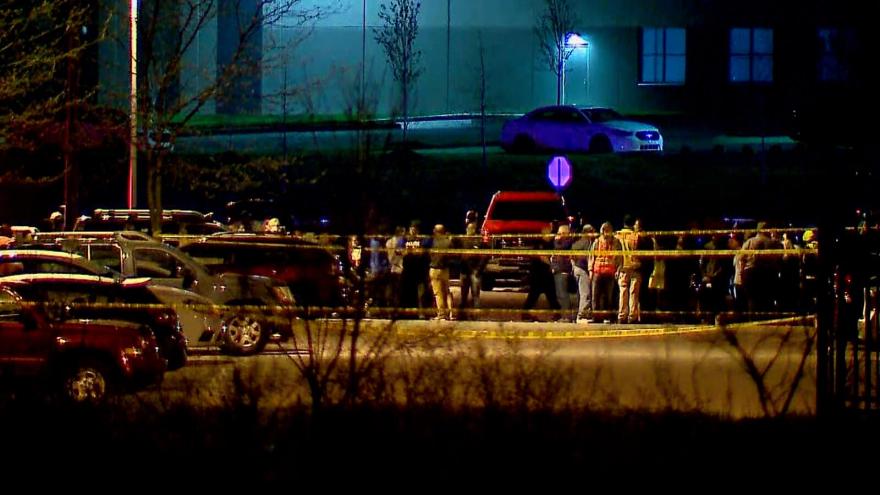 (CNN) -- President Joe Biden deemed the recent spate of mass shooting a "national embarrassment" on Friday, hours after he ordered flags to be lowered to half-staff on Friday in the wake of the mass shooting at an Indianapolis FedEx facility that killed at least eight people.

It's only been two weeks since the last time Biden made such an order after a previous mass shooting, and a fiery President said in a news conference with Japanese Prime Minister Yoshihide Suga that it's time for Congress to act.

"It's not always these mass shootings that are occurring -- every single day, every single day there's a mass shooting in the United States, if you count all those who are killed out on the streets of our cities and our rural areas," Biden said, during the news conference in the White House Rose Garden. "It's a national embarrassment and must come to an end."

He added, "I strongly support the universal background checks, which I continue to push, but Congress has to step up and act. The Senate has to act, and I strongly support, and continue -- have never stopped supporting the ban on assault weapons and magazines that hold more than 10 bullets. It doesn't mean that I can't also be working at the same time on the economy and on Covid, but it's not a question of my being able to set the agenda in the Senate as to what they will move to first."

In an earlier statement, the President noted that that incident took place on the 14th anniversary of the murder of 32 people at Virginia Tech University. Biden said gun violence "pierces the very soul of our nation" and called gun violence an "epidemic" in the US.

The shooting is the latest in a series of several high-profile mass shootings that have rocked the nation, including one at a supermarket in Boulder, Colorado, that killed 10 people and a shooting rampage in the Atlanta, Georgia, area that killed eight people. The incident in Indianapolis is at least the 45th mass shooting in the US in the last month following the Atlanta-area killings. The spate of mass shootings has led to increased calls for gun control measures, but the prospect for any bills in Congress is grim.

Vice President Kamala Harris spoke about the incident while meeting with Japanese Prime Minister Yoshihide Suga on Friday morning, saying she was thinking of the families that lost their loved ones in the shooting and said: "There is no question that this violence must end."

"Yet again, we have families in our country that are grieving the loss of their family members because of gun violence," Harris said at the White House.

Five people have been taken to local hospitals for treatment following the shooting. Police say they believe the shooter took his own life, and the FBI is assisting Indianapolis police with their investigation.

The shooting in Indianapolis is the latest in a recent spate of mass shootings across the country and comes a little more than a week after Biden unveiled several actions his administration would be taking to curb the level of gun violence in the US.

"Gun violence in this country is an epidemic and it's an international embarrassment," Biden said last week at the White House.

Biden's recently unveiled executive actions include efforts to restrict weapons known as "ghost guns" that can be built using parts and instructions purchased online. The actions are limited in scope and Biden said they are initial steps to address gun violence.

White House press secretary Jen Psaki echoed the President's call for the Senate to pass three bills strengthening background checks that have already passed the House of Representatives and to pass a ban on assault weapons and high-capacity magazines.

"Like all of you, we're horrified by the shooting overnight at a FedEx facility," Psaki told reporters at a White House briefing on Friday.

Psaki said: "The President has spent his entire career working to address gun violence and his determination to act has been redoubled by senseless killings we've seen both in mass shootings like this and in the lives lost to the epidemic of gun violence every single day in communities across our country."

Passing gun reform legislation through Congress remains an uphill climb for Democrats in the face of stiff Republican opposition and it is unclear what a bipartisan way forward on the issue could look like.

Biden made an extensive case for Congress to gut the liability protections for gun makers during a private meeting with Democratic lawmakers earlier this week, reiterating his public position as discussions are beginning in the House to pass legislation on the matter, according to multiple attendees.

Speaking with Democratic members of the Congressional Black Caucus, Biden talked at length about targeting the lawsuit protections gun manufacturers enjoy under federal law -- even though getting such legislation through the 50-50 Senate remains highly unlikely.

"He is committed to removing it -- and to make sure they are held accountable," said Rep. Steven Horsford, a Nevada Democrat who was at the meeting and who lost his own father to gun violence at the age of 19. Horsford told CNN that Biden talked about fingerprint technology that could be used by gun manufacturers to make firearm use easier to trace, as well as getting rid of the lawsuit protections once-and-for-all.

Democratic Rep. Sean Casten is working on legislation on the liability issue, and Horsford said that Democrats will push their leadership to schedule a vote on the matter.

"He said it was important that those protections-- those liability protections be removed from gun manufacturers -- with that, there would be some accountability and from that, we would see some reform from a free market standpoint," said Georgia Rep. Hank Johnson, who was in the meeting, said of Biden.

Stalled in the Senate

Sens. Richard Blumenthal and Chris Murphy, two Connecticut Democrats, have been calling Republicans to see if there could be any support for gun legislation that could reach the necessary 60 vote in the Senate to pass, CNN has reported.

Democrats currently have 50 senators in the chamber, which means they need every Democrat on board and then 10 Republicans in order to reach the necessary 60 vote threshold to pass the legislation.

Blumenthal and Murphy acknowledge they will have to pare back a House-passed bill that would mandate background checks on firearm sales on commercial and private transactions as they face opposition from Republican senators and skepticism from moderate Democrats on the issue.

Murphy tweeted Friday morning: "When Congress does absolutely nothing, shooting after shooting, we become complicit in this slaughter. Our silence has been interpreted as endorsement." He added, "Now is the moment for Democrats and Republicans to come together and pass a bill that will save lives."

Senate Majority Leader Chuck Schumer also called for action in the wake of the shooting, writing on Twitter that "my heart goes out to the families of the 8 people who were killed and to the survivors."

"The Senate will act to address this epidemic in America," he said, reiterating that he will bring legislation to prevent gun violence to the Senate floor for a vote. Schumer is planning to bring the House-passed bills to expand background checks to the floor, but both lack 60 votes and also face resistance from Democratic moderate senators.

This story and its headline have been updated with additional reporting.