Biden projects confidence about his lead: 'We believe we will be the winners' 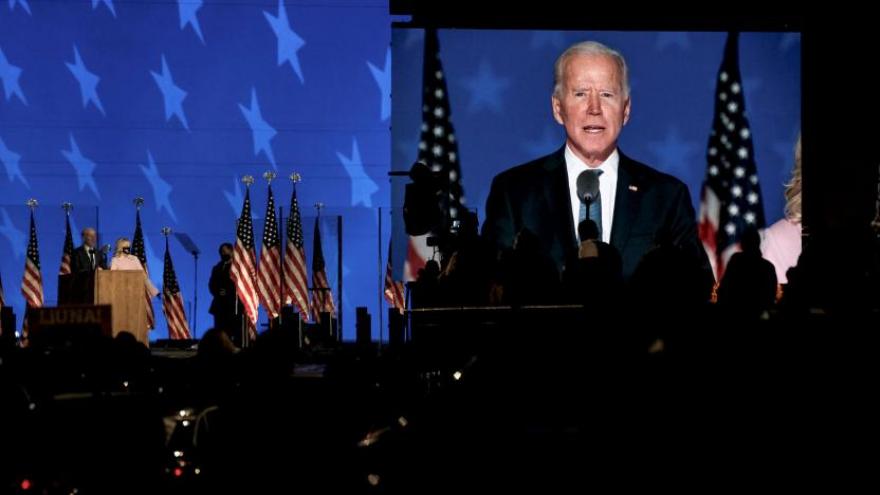 Biden campaign manager says he is 'on track to win this election.'

(CNN) -- Joe Biden projected confidence Wednesday that he will maintain his lead over Donald Trump in a series of key states that are enough to hand him the presidency.

Biden, in remarks on Wednesday afternoon, said that after "a long night of counting, it is clear that we are winning enough states to reach 270 electoral votes needed to win the presidency."

"I am not here to declare that we have won," Biden said, taking a notably different tact than the President, who early in the morning on Wednesday falsely said that he had won the White House. "But I am here to report when the count is finished, we believe we will be the winners."

CNN has projected Biden will win Michigan and Wisconsin, two of the "blue wall" states that President Donald Trump won in 2016. Biden also currently leads in Nevada, a state he needs to hold, and Arizona, a state that would represent a significant flip for the former vice president.

Biden also sought to look beyond the election, urging calm as tensions continued to be ratcheted up by the President.

"Once this election is finalized and behind us, it will be time to do what we have always done as Americans, to put the harsh rhetoric of the campaign behind us ... to unite, to heal, to come together as a nation," Biden said. "I know this won't be easy. I'm not naïve, neither of us are. I know how deep and hard the opposing views are in our county on so many things, but I also know this as well, to make progress, we have to stop treating out opponents as enemies."

As he has done throughout the campaign, Biden sought to portray himself as the clear opposite of Trump. The strategy imbued his campaign on everything from the handling of the coronavirus to re-establishing democratic norms and continued on Wednesday as he spoke from Wilmington.

"Now, every vote must be counted," Biden said as the Trump campaign began to prepare legal challenges. "No one is going to take our democracy away from us, not now, not ever."

Biden's comment echoed those by his top staffers earlier in the day, who asserted that that with largely mail-in votes -- which have favored Biden, compared to votes cast in person on Election Day favoring Trump -- remaining to be counted, the leads would hold in key states.

"Joe Biden is on track to win this election and he will be the next president of the United States," Biden campaign manager Jen O'Malley Dillon told reporters in a briefing. "We believe we are on a clear path to victory by this afternoon."

Biden's campaign argued it could go beyond 270 electoral votes. In Pennsylvania and Georgia, mail-in ballots in urban areas are still being counted, which means Biden is all but certain to narrow Trump's current leads.

O'Malley Dillon conceded that North Carolina, though, is leaning in Trump's favor.

Biden's campaign also used the briefing to respond to Trump's claim in an early Wednesday morning speech at the White House that he would take the election to the Supreme Court.

Biden adviser Bob Bauer pushed back forcefully against any potential case going before the Supreme Court.

"If at some point he arrives before the Supreme Court with a novel proposition that ballots that were lawfully cast by eligible voters, but not yet counted by the time Donald Trump wanted them counted -- that somehow they don't count anymore, he will be in for one of the most embarrassing defeats a president ever suffered before the highest court of the land," Bauer said.