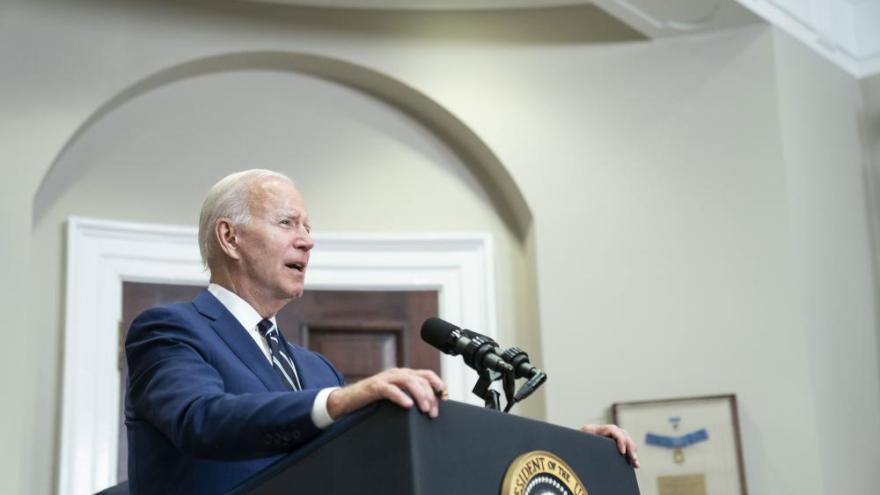 The new rules would clarify that Title IX's protections against discrimination apply to sexual orientation and gender identity and that preventing someone from participating in a school program or activity consistent with their gender identity would be in violation of the law. Title IX, a landmark piece of legislation that was signed into law 50 years ago Thursday, prohibits sex discrimination at federally funded schools.

President Joe Biden said in a statement Thursday that Title IX "transformed our nation" and the US has made "monumental progress in advancing equity and equality for all students."

But, he said, "There is more work to do. As we look to the next fifty years, I am committed to protecting this progress and working to achieve full equality, inclusion, and dignity for women and girls, LGBTQI+ Americans, all students, and all Americans."

The Biden administration is also proposing rolling back a rule put in place by the Trump administration that offers more protections for those accused of sexual harassment and assault on college campuses and narrows the definition of sexual misconduct on campuses.

The Trump-era changes received significant backlash from victim advocacy groups, which argued the regulations would discourage survivors from reporting sexual assault and harassment. Under the Trump rules, colleges and universities are required to hold live hearings with cross-examinations of both parties. Then-Education Secretary Betsy DeVos argued that guidance issued under the Obama administration had denied due process to those accused of harassment or assault and the new rules would give more rights to those accused.

The Department of Education on Thursday argued that the Trump administration had "weakened protections for survivors of sexual assault and diminished the promise of an education free from discrimination."

"These proposed regulations will advance Title IX's goal of ensuring that no person experiences sex discrimination in education, that all students receive appropriate support as needed to access equal educational opportunities, and that school procedures for investigating and resolving complaints of sex discrimination, including sex-based harassment and sexual violence, are fair to all involved," the department said.

The proposed changes face a public comment period before being finalized.

The new proposals come as conservative state lawmakers across the nation have pushed more than 100 anti-trans bills this year, with a particular focus on transgender students. If approved, the changes could give LGBTQ advocates more legal ammunition as they challenge some of the recently enacted state laws in court.

The laws targeting trans students focus on several different areas of life. In Oklahoma, for example, Republican Gov. Kevin Stitt last month signed into law a bill that requires students at public schools and public charter schools to use restrooms and locker rooms that match the sex listed on their birth certificates. Earlier this month, Louisiana banned transgender women and girls from competing on sports teams consistent with their gender at all public and some private elementary and secondary schools and colleges. A number of these so-called sports bans have already been challenged in federal court, with judges temporarily pausing West Virginia's and Idaho's enforcement of their bans in the last two years.

"This is a much-needed step in the right direction," said Paul D. Castillo, an attorney with Lambda Legal, an LGBTQ legal advocacy group, in a statement.

"With LGBTQI+ students, and especially transgender and nonbinary students, under attack from extremist politicians, these new rules will provide a stronger, clearer measure of recourse and better ensure that victims of unlawful discrimination can avail themselves of the longstanding protections under Title IX."

The Human Rights Campaign, one of the nation's largest LGBTQ rights groups, said that by "spelling out protections based on sexual orientation and gender identity, it will further safeguard a vulnerable population that is all too often preyed upon."

"The proposed rule change gets at the heart of what Title IX is supposed to do -- protect students from sexual assault, sexual harassment and discrimination while on campus," said Sarah Warbelow, the Human Rights Campaign's legal director. "These protections are particularly critical for female and LGBTQ+ students."

Since taking office, Biden has taken several actions aimed at protecting LGBTQ rights and rolling back controversial moves made by the Trump administration. Last year, the Biden administration revoked a Trump-era decision to end protections in health care for patients who are transgender. The Department of Housing and Urban Development also announced last year that protections under the Fair Housing Act will cover LGBTQ Americans. This move allowed the federal government to investigate complaints of housing discrimination based on sexual orientation or gender identity.