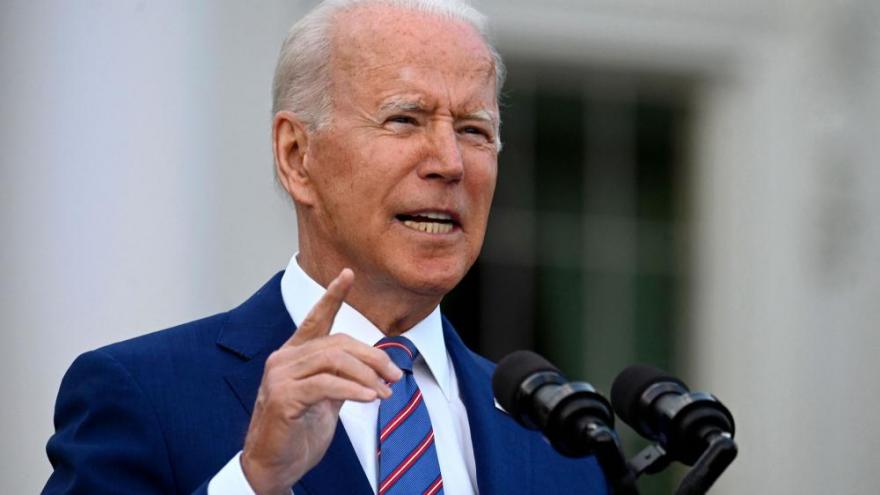 US President Joe Biden speaks during Independence Day celebrations on the South Lawn of the White House. Biden will push for "generational investments in human infrastructure" to expand the social safety net in remarks in Crystal Lake, Illinois, according to a White House official.

(CNN) -- President Joe Biden on Wednesday pushed for generational investments in human infrastructure to expand the social safety net, asserting that he'll continue to make the case for his plans "until the job is done."

Biden made the case for policies that were included in his original American Jobs Plan proposal that didn't make it into the bipartisan infrastructure framework, and pushed for his second economic proposal, the American Families Plan, which Democrats are planning to pass through Congress using budget reconciliation.

"It's about a country once again that inspires and leads the world in the opportunities we provide, the technology we discover, the technologies we pioneer and the industries we create. And the nation that lead the world in combating the existential threat of climate change," Biden said during remarks in Crystal Lake, Illinois.

"I'm going to be making the case to the American people until the job is done, until we bring this bipartisan deal home, until we meet the needs of the families of today and the economy of tomorrow," he later said from the podium.

The President also toured McHenry County College, which included a stop at the institution's Children's Learning Center. There, he touted the benefits working parents would receive if it were extended. He spoke about when he was a single parent working in the Senate and how he could not afford childcare, noting that many people cannot make it by themselves.

"So guess what? By before the month is over, those (who) qualify, you're gonna get a check for 600 bucks a month between now and the end of the year, and then the remainder of the year you're getting another 600 bucks until the next tax day, and we're trying to get it extended so we do it," Biden told those in the room.

Biden is pushing to make Affordable Care Act enhanced subsidies, also known as premium tax credits, permanent. His economic proposals would extend the enhanced child tax credit for four years, through 2025. The child and dependent care tax credit was enhanced by the American Rescue Plan Act for 2021, and the American Families Plan would make it permanent.

"This is going to be a hell of a fight over what this country ought to look like in the future and it's all going to unfold here in the next few weeks," McConnell said at a news conference in Kentucky. "I don't think we've had a bigger difference of opinion between the two parties over the best thing to do for America than we have right now."

While in Illinois, Biden pushed back on McConnell's criticism, saying the plan will lead to communities in Kentucky getting additional funds.

Asked to respond to McConnell, the President said, "Mitch McConnell loves our programs."

"He told me he wasn't going to get a single vote in order to allow me to get, with the help of everybody here, that $1.9 trillion ... (American Rescue Plan) program for economic growth. Look it up, man. He's bragging about it in Kentucky. It's a great thing for Kentucky. It's getting $4 billion to help (the) poor -- It's amazing. Check out Mitch McConnell -- you can even see it on TV," Biden said.

"He told me he wasn't going to get a single vote in order to allow me to get, with the help of everybody here, that $1.9 trillion tax cut, I mean, excuse me, program for economic growth. Look it up man, he's bragging about it Kentucky. It's a great thing for Kentucky $4 billion to help (the) poor," Biden said.

Biden on Wednesday also focused on how his economic proposals would combat the climate crisis. He will push for providing tax cuts for businesses and consumers who invest in clean energy technologies and setting a clean electricity standard. The President also outlined a goal of enlisting "a new generation of climate, conservation and resilience workers."

"We can't wait any longer to deal with the climate crisis. We see it with our own eyes and it's time to act. The bipartisan agreement we made makes some major strides," Biden told the audience in Illinois.

Biden also highlighted his plans to expand home care for older and disabled Americans and improve the jobs and the pay of the home care workers who care for them. He touted the investments in affordable housing, which would aim to build or rehabilitate more than two million homes.

Biden's visit to the Chicago area comes after the city endured one of the most violent weekends of the year, with 108 people shot. The city's mayor, Lori Lightfoot, said she planned to press Biden on gun trafficking rules when they meet on the tarmac at Chicago O'Hare International Airport.

The White House said in a statement after their meeting that "Biden expressed his personal support for the two ATF officials and the Chicago police officer who were shot earlier today."

He also "reiterated his commitment to working with the Mayor and leaders in Chicago in the fight against gun violence and conveyed that the Department of Justice would soon be in touch about the strike force announced just a few weeks ago that will be working with cities like Chicago," the statement said.