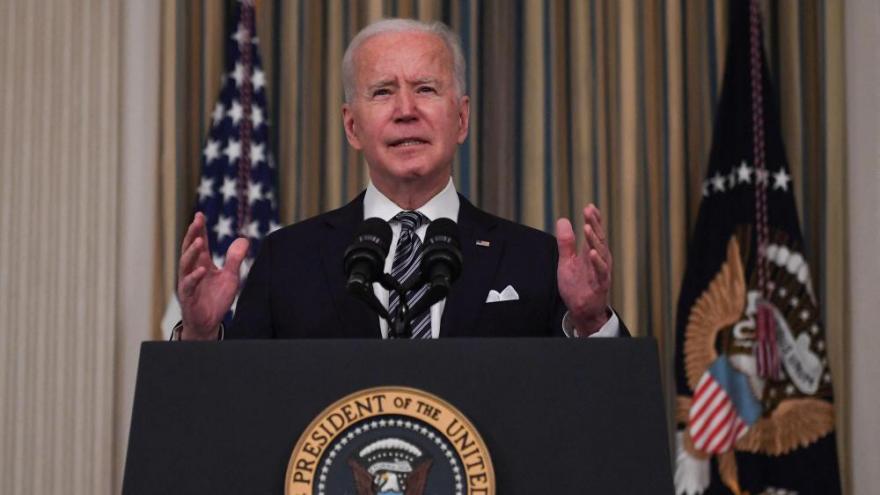 President Joe Biden again reiterated he intends to raise taxes for the most wealthy Americans in an ABC News interview aired Wednesday.

(CNN) -- President Joe Biden again reiterated he intends to raise taxes for the most wealthy Americans in an ABC News interview aired Wednesday, saying "anybody making more than $400,000 a year will see a small to significant tax increase." He also pledged that individual Americans who make less than $400,000 -- which is more than 90% of taxpayers -- "won't see one single penny in additional federal tax."

Biden said Republican criticism for his $1.9 trillion Covid-19 relief law is because the tax breaks in his plan go to the bottom 60% of the population while "their idea of a tax cut is to give the Trump tax cut where 83% went to the top 1% of people in America."

Biden acknowledged that he may not get any Republican support for a tax increase but he said he "will get Democratic votes." He then added he thinks the Senate filibuster should return to the "talking filibuster" but he did not say that he wants to see the 60-vote threshold to end debate on bills eliminated -- something that could make achieving a tax increase without Republican votes unlikely.

"If we just took the tax rate back to what it was when (George W.) Bush was president, top rate paid 39.6% in federal tax, that would raise $230 billion. Yet they're complaining because I'm providing a tax credit for child care? For the poor? For the middle class?" Biden added.

Biden put forth several proposals during his presidential campaign that would raise taxes for the wealthy and on corporations by reversing some of the tax cuts that President Donald Trump signed into law in 2017.

On Monday, White house press secretary Jen Psaki said that Biden believes that "those at the top are not doing their part" and "obviously that corporations could be paying higher taxes."

Treasury Secretary Janet Yellen on Sunday suggested a tax hike could be on the horizon when she said she expects the White House to put forward proposals over time to get deficits under control.

"(Biden) hasn't proposed a wealth tax but he has proposed that corporations and wealthy individuals should pay more in order to meet the needs of the economy, the spending we need to do, and over time I expect that we will be putting forth proposals to get deficits under control," Yellen told ABC.

Biden had also proposed changing the way 401(k) retirement savings accounts are treated in the tax code in order to give low-income earners a bigger tax break up front.