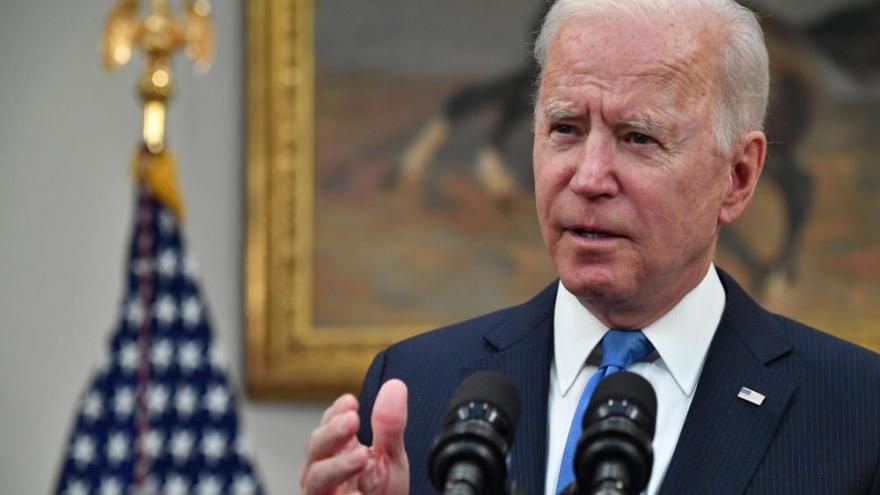 President Joe Biden issued executive orders on Friday revoking several executive actions taken by former President Donald Trump, including a proclamation that required that visa applicants have health insurance or the means to pay for medical care, an action related to online censorship and an order to build "the Garden of American Heroes." Biden is shown here in the Roosevelt Room of the White House in Washington, DC, on May 13, 2021.

(CNN) -- President Joe Biden issued executive orders on Friday revoking several executive actions taken by former President Donald Trump, including a proclamation that required that visa applicants have health insurance or the means to pay for medical care, an action related to online censorship and an order to build "the Garden of American Heroes."

The 2019 proclamation related to health coverage for visa applicants never took effect and was met with immediate legal challenges by advocates who argued it would bar thousands of immigrants from coming to the US.

In his reversal of the policy, Biden stated that his administration "is committed to expanding access to quality, affordable healthcare" and that their objective can be achieved "without barring the entry of noncitizens who seek to immigrate lawfully to this country but who lack significant financial means or have not purchased health insurance coverage from a restrictive list of qualifying plans."

At the time, Trump said the action was intended to "defend free speech from one of the gravest dangers it has faced in American history." The action sought to curtail the power of large social media platforms by reinterpreting a critical 1996 law that shields websites and tech companies from lawsuits.

The President also pulled back the order Trump signed amid protests against police brutality that broke out around the country last year. The order instructed the attorney general to "prioritize within the Department of Justice the investigation and prosecution" of those who damage government-owned monuments, citing federal law that "authorizes a penalty of up to 10 years' imprisonment for the willful injury of Federal property."

Trump's proposed Garden of American Heroes -- another order issued amid last year's demonstrations that would have created a garden of statues featuring notable American figures -- was also nixed by Biden on Friday.

Another order that was dropped was an attempt to "rebrand" foreign assistance to "appropriately and conspicuously be identified as American aid." And an order issued in Trump's final days in office, which targeted "overcriminalization through regulatory reform," was also revoked.

Biden has spent a significant portion of his other executive actions reversing orders imposed by Trump.

In his first day in office, Biden signed a flurry of actions that halted funding for the construction of Trump's border wall, reversed his travel ban targeting largely Muslim countries, reversed Trump's attempts to withdraw the US from international agreements and recommitted the US to rejoining the Paris climate agreement.

And within his first 100 days in office, Biden ended up signing more than 60 executive actions -- 24 of which were direct reversals of Trump's policies.