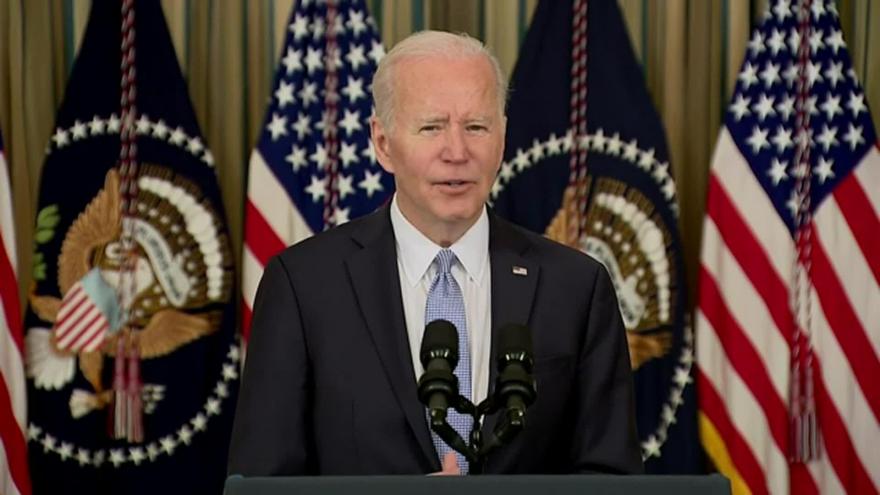 (CNN) -- President Joe Biden on Friday touted the March jobs report that showed the US added another 431,000 jobs in March and the American unemployment rate fell to a new pandemic-era low of 3.6%.

"Americans are back to work. And that's good news for millions of families who have a little more breathing room and the dignity that comes from earning a paycheck, just the dignity of having a job," Biden said in remarks from the White House.

The President argued the new report, released by the Bureau of Labor Statistics on Friday, showed that "our economy has gone from being on the mend to being on the move."

The report was a welcome one for the White House as it struggles to combat surging gas prices amid Russia's invasion of Ukraine. The President has also had to deal with record inflation, rising consumer prices and global supply chain issues brought on by the pandemic. Biden's approval rating has dipped in recent months as many Americans grow more concerned about their household finances.

The President on Friday stressed combating inflationary pressures remained a top priority of his administration, and said reducing the deficit would help achieve that goal. Earlier this week, the President released his fiscal year 2023 budget proposal and said his proposed $1.3 trillion budget cut would stand to be "the largest one-year reduction in the deficit in US history."

"It was the previous administration, through its reckless policies and mismanagement, that led to the record budget deficits," the President said.

The President credited the large-scale Covid-19 emergency relief package and the bipartisan infrastructure law with jump-starting the economy in the midst of the pandemic. As the White House pushes for more funding from Congress for its Covid-19 response, the President noted the funds helped stand up the national vaccination program and keep schools open.

"We're building a recovery worthy of American workers, strong and resilient and it's going to be able to overcome the head winds that it has -- of Delta, Omicron and even war in Europe. Our policies are working and we're getting results for the American people, which is what it's all about, to state the obvious," Biden said.

As the White House works to combat sky-high gas prices, Biden on Thursday announced an unprecedented release of oil from US reserves and several steps his administration is taking to punish oil companies for not increasing production from unused leases on federal land. The steps are aimed at reducing gas prices, which have skyrocketed in recent months, while also putting an onus on oil companies to increase supply.