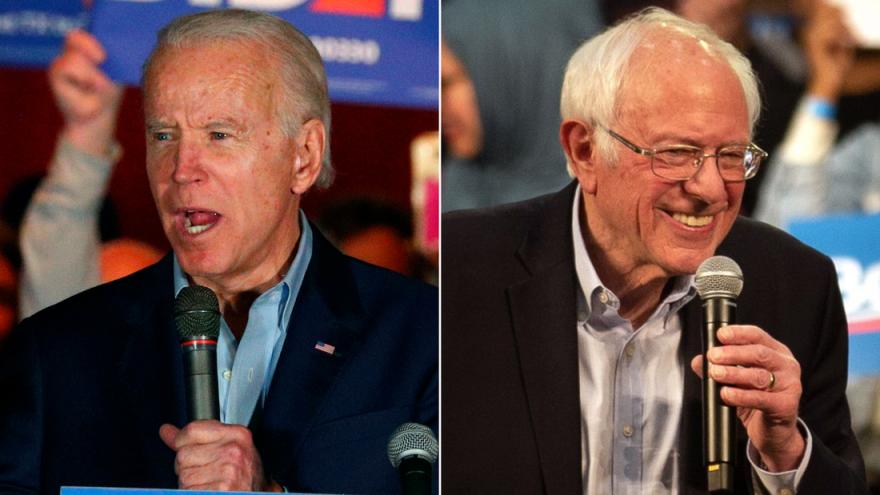 Biden -- in a phone call to supporters at a Bethesda, Maryland, fundraiser -- also warned against negativity that could come from what he referred to as "Bernie brothers," saying that the primary cannot become a "negative bloodbath."

An aide told CNN that the money was raised in the days after Biden's victories in the South Carolina primary andon Super Tuesday. The haul is significant for Biden, whose campaign lagged behind that of his rivals in fundraising in the last few quarters.

On the phone call, Biden appeared to reference Sanders' new lines of attack, but also to the Vermont senator's more aggressive supporters, who have become known as "Bernie Bros."

"What we can't let happen is let this primary become a negative bloodbath," Biden said, according to a pool report. "I know I'm going to get a lot of suggestions on how to respond to what I suspect will be an increasingly negative campaign that the Bernie Brothers will run. But we can't tear this party apart and reelect Trump. We have to keep our eyes on the ball, in my view."

"Tens of millions are uninsured while coronavirus spreads, the planet is warming at an accelerating rate, working people haven't seen a real raise in decades, and Joe Biden is worried about some damn tweets?" Casca said in a statement. "Let's try to stay focused on the big issues."

As the Democratic primary has rapidly narrowed to a two-man race, Sanders has stepped up his criticism of the former vice president, slamming him on a range of issues including Social Security, the Iraq War vote and the North American Free Trade Agreement.

But Sanders has also adding new lines of attack on Biden's record on LGBTQ and reproductive rights, specifically the former Delaware senator's past support on the military's "Don't Ask, Don't Tell" policy and the Hyde Amendment, which bans the use of federal funds to pay for abortion in most cases. Biden supported the 2010 repeal of "Don't Ask, Don't Tell" and said in June 2019 he no longer supports the Hyde Amendment

"When we talk about differences with my friend Joe Biden -- and he is my friend -- I think it's important for people of Michigan and people of America to know difference in our record," Sanders said Friday during a rally in Detroit. "Joe's been around for a while, I've been around for a while, how do we differ, what's our records? Who stood up when the going was tough?"

The former vice president conceded that he would be attacked in the general election if selected as the nominee but added that Sanders was likely to continue throwing punches as well.

"It's going to be hard. This guy's going to come at me and throw everything including the kitchen sink," he said. "I don't mean Bernie, I mean in the general election. But Bernie is going to throw -- he'll at least throw the dishwasher at me."

The former vice president apologized to his supporters for not appearing at the fundraiser in person because he had to "show up somewhere for a major endorsement" that would be announced "very soon." It is unclear who the possible endorser could be.