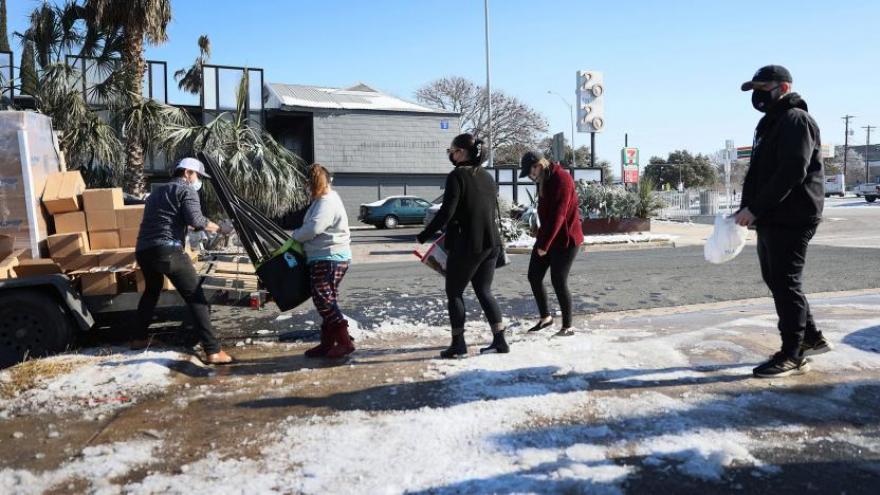 President Joe Biden said on Friday that he plans to travel to Texas but does not want a presidential trip to put any additional strain on a state grappling with an extreme weather crisis.

(CNN) -- President Joe Biden said on Friday that he plans to travel to Texas but does not want a presidential trip to put any additional strain on a state grappling with an extreme weather crisis.

"The answer is yes," Biden said when asked if he would travel to Texas after he addressed the Munich Security Conference.

"If, in fact, it's concluded that I can do it without creating a burden for the folks on the ground while they are dealing with this crisis, I plan on going," Biden said. He said that decision would probably be made at the beginning of next week.

The announcement comes after a devastating week of freezing temperatures and winter storms in Texas that led to widespread power outages. The state has begun restoring power, but nearly half of the state's population remains under boil-water advisories as water scarcity continues.

Biden said he had spoken with Texas Gov. Greg Abbott, a Republican, on Thursday night. The President said he would ask acting-Federal Emergency Management Agency administrator Bob Fenton on Friday afternoon to accelerate its response to the request from Abbott for a major disaster declaration.

"We're going to sign that declaration once it's in front of me, and God willing, it will bring a lot of relief to a lot of Texans," Biden said.

Biden already approved an emergency declaration for the state over the weekend, but the major disaster declaration would allow FEMA to provide more resources and assistance, including supplementing insurance to help individuals with uncovered costs or other costs to make homes habitable.

The President said FEMA is providing support in the form of generators, diesel fuel, water, blankets and other supplies. Biden said he had directed the US Departments of Health and Human Services, Housing and Urban Development, Agriculture and Defense to identify "other resources that can provide and address the growing needs of the folks in Texas."

The White House said Friday that throughout the week it had been in touch with mayors and county officials throughout Texas to ensure they were connected with FEMA for any immediate needs.

White House press secretary Jen Psaki said Thursday that Biden had been receiving updates about Texas and the surrounding states impacted by the bad weather more than once a day.

"Ensuring that the people of Texas, the people of the surrounding states have the resources they need is something that he raises in meetings frequently and has over the past couple of days," Psaki said at the briefing.

She said the President has directed his team to "make rapid decisions and be responsive to the specific needs of the states as they come up during this difficult time."