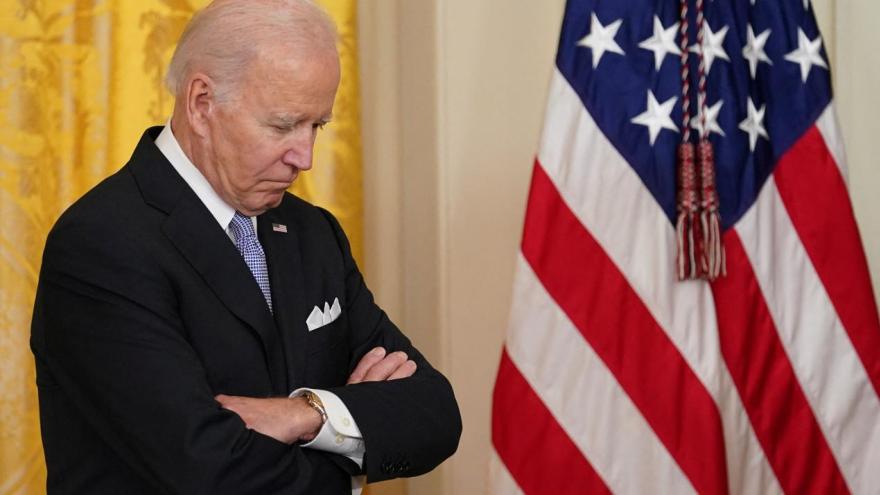 U.S. President Joe Biden listens ahead of the signing of an executive order to reform federal and local policing on the second anniversary of the death of George Floyd, during an event at the White House in Washington, U.S., May 25. Biden said that he will travel to Uvalde, Texas, in the near future to meet the families of the 19 children and two teachers killed during a horrific school shooting.

(CNN) -- President Joe Biden said on Wednesday that he will travel to Uvalde, Texas, in the near future to meet the families of the 19 children and two teachers killed during a horrific school shooting.

"Jill and I will be traveling to Texas in the coming days to meet with the families and let them know we have a sense of their pain, and hopefully bring some little comfort to a community in shock, in grief and in trauma," Biden said at the White House during a signing event for an executive order on police reform.

"As a nation, I think we all must be for them. Everyone," he added. "And we must ask: When in God's name will we do what needs to be done to, if not completely stop, fundamentally change the amount of the carnage that goes on in this country?"

Echoing remarks he made Tuesday night in a national address, Biden said he was "sick and tired of what's going on."

He said "common sense" gun reform wouldn't "prevent every tragedy," but would still "have significant impact, and have no negative impact on the Second Amendment."

"The Second Amendment is not absolute," Biden said. "When it was passed you couldn't own a cannon. You couldn't own certain kinds of weapons. There's just always been limitations."

"The idea an 18-year-old can buy weapons of war designed and marketed to kill is, I think, just wrong. It just violates common sense," the President continued.

"Where's the backbone?" he asked. "Where's the courage to stand up to a very powerful lobby?"

The President said on Wednesday that "one modest step" Congress could take immediately would be to confirm his nominee to lead the Bureau of Alcohol, Tobacco, Firearms and Explosives, Steve Dettelbach, who vowed earlier Wednesday at a Senate confirmation hearing that he would not be influenced by political considerations if he secures the job.

"The Senate should confirm him without delay, without excuse," Biden said. "Send the nomination to my desk. It's time for action."

With 21 dead and 17 others injured, the attack at Robb Elementary School in Uvalde was the deadliest school shooting in almost a decade, shaking a nation still reeling from a mass shooting in Buffalo, New York, just 10 days ago.

Details about how the shooting unfolded have continued to be released by law enforcement officials on Wednesday as more is learned about the crime. The suspect shot his grandmother, drove to the nearby school, forced his way inside adjoining classrooms and opened fire at a group of kids and faculty. Officers eventually forced their way into the barricaded room and a Border Patrol officer fatally shot him.

Tuesday's massacre is the second-deadliest school shooting since 2012, when 26 children and adults were killed at Sandy Hook Elementary School in Connecticut, and it was at least the 30th shooting at a K-12 school in 2022, according to a CNN tally.

Biden, in his national address Tuesday night, recalled the Sandy Hook shooting, which happened when he was vice president.

"I had hoped when I became President I would not have to do this again," he said. "How many scores of little children who witnessed what happened -- see their friends die as if they're in a battlefield, for God's sake? They'll live with it the rest of their lives."