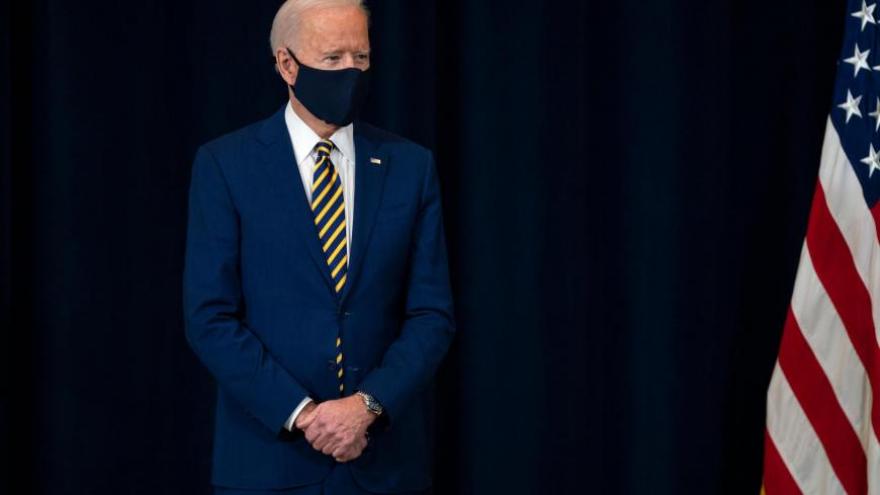 President Joe Biden said the US will not lift sanctions to get Iran back to the negotiating table, suggesting the measure would only happen if Tehran stops enriching uranium. Biden pictured here listens as he is introduced to deliver remarks to State Department staff, Thursday, Feb. 4, 2021, in Washington.

(CNN) -- President Joe Biden said the US will not lift sanctions to get Iran back to the negotiating table, suggesting the measure would only happen if Tehran stops enriching uranium.

"No," Biden said when asked by CBS' Norah O'Donnell if he would make the move to start negotiations, nodding when she asked in a newly released interview clip if the country must stop enriching uranium first. The interview is set to air in full on CBS later Sunday.

These comments mark the sharpest public response from the President on Tehran since taking office and continue a stalemate between the two countries.

In the past, the President has said the US will rejoin the Iran nuclear deal, formally known as the Joint Comprehensive Plan of Action, once Tehran fully complies again with the pact. Iran's position is that because the US left the agreement in 2018, Washington should make the first move by removing the crippling sanctions former President Donald Trump liberally imposed on Iran's leaders, on individuals and the economy, and for terrorism. Iran has increasingly breached its obligations under the nuclear deal after the Trump administration withdrew the US from it.

Iran's Supreme Leader Ayatollah Ali Khamenei said Sunday the US "must lift all sanctions" if it wants Tehran to return to the deal. Iranian Foreign Minister Mohammad Javad Zarif told CNN's Fareed Zakaria on Sunday that the US is the one who needs to return to the pact and that Iran never left it.

Tehran's Parliament passed legislation on December 2 that requires significant increases in its nuclear activities at regular intervals if Iran's demands for sanctions relief, including on its banking and oil sectors, are not met.

Tehran announced in January that it had resumed enriching uranium up to 20% purity, far beyond the limits laid out in the 2015 nuclear deal.

Nuclear officials have also increased enrichment capacity at the Natanz facility. And on Monday, Iran aired video footage of what it claimed was the "most powerful" rocket engine using a system that could launch long-range missiles capable of endangering US allies in Europe and the Middle East or the US itself.

There have been a flurry of behind-the-scenes actions the Biden administration has taken, including building a team with varying viewpoints on Tehran and reaching out to lawmakers.

On Friday, the National Security Council hosted a meeting to discuss the country's growing nuclear enrichment, part of an ongoing policy review. White House press secretary Jen Psaki confirmed it on Twitter and said it wouldn't produce any decisions.

"The meeting today is part of an ongoing policy review. It is not decisional," Psaki wrote Friday. "There are no pending policy announcements. We will consult broadly with Congress and partners before any decisions are taken."

Talks on the escalation in Tehran are also happening between allies, national security adviser Jake Sullivan told reporters at a briefing Thursday. He said the US is engaged in talks with European Union allies on a strategy toward Iran and believes it will produce a "unified front."

"We are actively engaged with the European Union right now, particularly the three members of the P5+1; Germany, the UK and France. We are talking to them at various levels of our government, those consultations, I think will produce a unified front when it comes to our strategy towards Iran and towards dealing with diplomacy around the nuclear file, and I just don't want to get ahead of where that's going to end up," Sullivan said.

Biden has discussed Iran with foreign leaders since taking office, according to readouts provided by the White House.

Zarif, when speaking to CNN's Zakaria Sunday before the President's comments on Iran were released, said Biden had two choices.