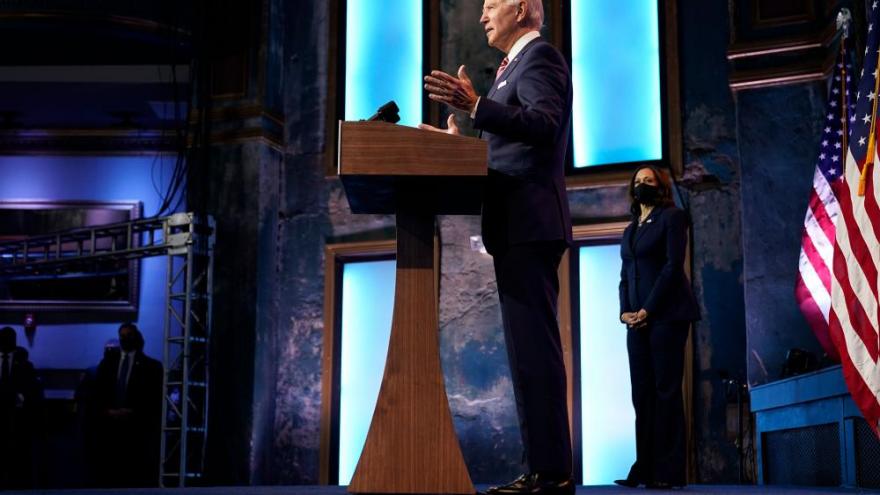 (CNN) -- President-elect Joe Biden warned that President Donald Trump's unwillingness to accept the outcome of the 2020 election could hamper the incoming Biden administration's ability to rapidly distribute a coronavirus vaccine.

"More people may die if we don't coordinate," Biden told reporters Monday in Delaware, in a news conference after he met with labor and business leaders and delivered a speech on the economy.

Biden's comment comes as Trump refuses to acknowledge the reality that he lost the presidential election. The Trump-appointed administrator of the General Services Administration has so far refused to take the legally necessary step to begin the transition process, which would give Biden's team a budget, intelligence briefings and access to federal agencies.

Biden said coordination is important "now, or as rapidly as we can get that done," and said that "it would make it a lot easier if the President were to participate."

"I am hopeful that the President will be mildly more enlightened before we get to January 20," he said, making note of the date he will be inaugurated.

And he lambasted Trump's coronavirus adviser, Scott Atlas, for urging people on Twitter to "rise up" against governors' mask mandates.

Holding up the mask he had worn to the podium where he delivered his speech Monday, Biden said: "Does anybody understand why a governor would turn this into a political statement? It's about patriotism."

Biden characterized the economy as "teetering on the edge" headed into a "very dark winter" months before coronavirus vaccines could become widely available.

He urged Congress to pass a coronavirus relief package that includes funding to help state and local governments with payrolls for public workers like teachers and first responders.

"There's a reason why the federal government is able to run a deficit: because the states must, must, balance their budget. And they're in real trouble," Biden said.

He called on the Democratic-led House and Republican-controlled Senate to pass a package similar to legislation the House approved months ago -- but that the Senate has refused to take up.

"We can deliver immediate relief, and it need be done quickly," Biden said.

And in an implicit rebuke of Trump, who has frequently opposed financial help for Democratic-led states and cities, Biden said that "we're all American" and the need for bipartisan collaboration is "a mandate from the American people."

"They want us to cooperate," he said.

Biden's remarks Monday followed a virtual meeting he and Harris held with the heads of several of the nation's leading labor unions and the top executives of Microsoft, General Motors, Gap and Target.

"I must tell you, it reinforced what I thought from the beginning: We're ready to come together. And the unity was astounding," Biden said of the meeting. "It was really encouraging, quite frankly, to get people -- business and labor -- together agreeing on the way forward."

He is set to take office -- much like he did as vice president in 2008 -- with a battered economy, this time the result of the coronavirus pandemic. Biden campaigned on a push for hundreds of billions of dollars in stimulus spending aimed at clean energy, infrastructure and what he called the "caregiving economy."

Biden pitched that plan Monday afternoon, calling them the kinds of investments that could strengthen the United States economy and create millions of union jobs. He also said he wants a $15-per-hour minimum wage nationwide.