Biden says sanctions against Russia are proportionate response: 'Now is the time to de-escalate' 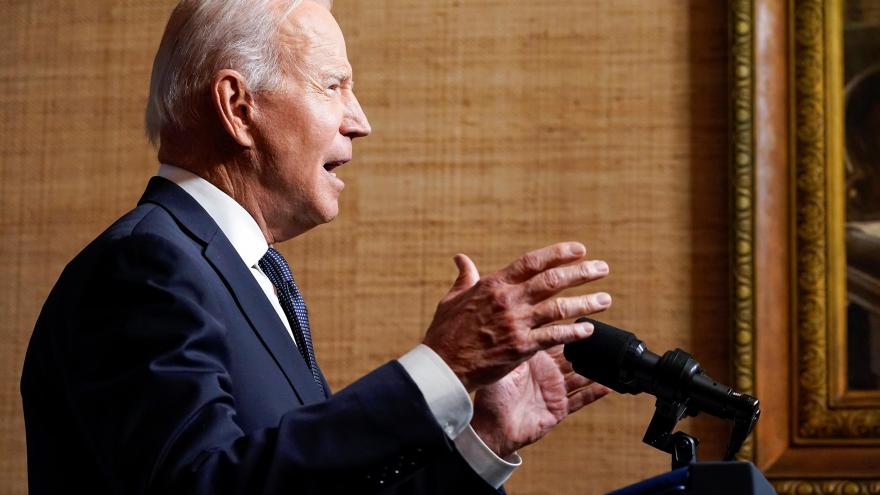 President Joe Biden said Thursday that the sanctions he announced on Russia are a proportionate response to cyber attacks against the US and interference in two different presidential elections. Biden is shown in the White House on Wednesday, April 14, 2021. - Andrew Harnik/AP

(CNN) -- President Joe Biden said Thursday that the newly announced sanctions against Russia are a proportionate response to cyberattacks against the US and interference in two presidential elections, but also emphasized that "now is the time to de-escalate" tensions with the country.

Biden said during remarks at the White House that he told Russian President Vladimir Putin in a call earlier in the week that he could have gone further with the measures. While he wanted to avoid escalating tensions, Biden made clear that he will not hesitate to take further action in the future.

"We cannot allow a foreign power to interfere in our democratic process with impunity," Biden said.

He added, "I told (Putin) that we would shortly be responding in a measured and proportionate way because we had concluded that they had interfered in the election and SolarWinds was ... totally inappropriate."

The administration announced earlier Thursday that it was hitting Russia with sweeping sanctions and diplomatic expulsions, punishing Moscow for its interference in the 2020 US election, its SolarWinds cyberattack and its ongoing occupation and "severe human rights abuses" in Crimea.

The President said the US "is not looking to kick off a cycle of escalation and conflict in Russia. We want a stable, predictable relationship," before sending a warning: "If Russia continues to interfere with our democracy, we're prepared to take further actions to respond."

Biden did offer an olive branch, referencing the summit he has proposed with the Russian leader that he hopes will take place later on this summer in Europe.

"Now is the time to de-escalate," he said. "The way forward is through thoughtful dialogue and diplomatic process."

As part of Thursday's announcement, the US formally named the Russian Foreign Intelligence Service as the force behind the SolarWinds hack that affected the federal government and wide swaths of the private sector. The White House also said that it is expelling 10 Russian diplomats from Washington, including "representatives of Russian intelligence services," for the cyber hack and the election meddling.

The Biden administration is barring US financial institutions from participating in the primary market for bonds issued by Russia's central bank and other leading financial institutions. The US is also sanctioning six Russian tech companies that support the Russian intelligence services' cyber program, as well as 32 entities and individuals for carrying out "Russian government-directed attempts to influence the 2020 US presidential election," the administration said in a fact sheet. Another eight individuals and entities are being sanctioned for "Russia's ongoing occupation and repression in Crimea."

It's not clear how much the Biden administration's moves will change Putin's behavior. Biden did not directly answer whether the Russian president gave him any indication that he was willing to change, but told CNN's Phil Mattingly that he urged Putin "to respond appropriately."

"We indicated we would talk about it," Biden said in response to Mattingly's question on Putin's attitude.

"I urged him to respond appropriately, not to exceed it because we can move as well. My hope and expectation is we'll be able to work out modus vivendi but it's important that we have direct talks and we continue to be in contact with one another," Biden added.

The President emphasized that there are places where the US and Russia can work together. He cited the New START treaty between the two nations and work "reining in nuclear threats from Iran and North Korea, ending this pandemic globally and meeting the existential crisis of climate change."

The White House has also addressed the omission of sanctions against Russia for other issues.

Biden said during his remarks on Thursday that the issue of Nord Stream 2 -- a natural gas pipeline between Russia and Germany -- is still "at play." And earlier Thursday, White House press secretary Jen Psaki said that the Biden administration feels "there are questions to be answered by the Russian government" about Russia allegedly placing bounties on US service members in Afghanistan.

Ahead of the potential summer summit, Biden may take part in meetings with Putin next week. The Russian president is among the dozens of world leaders invited to a virtual summit on climate change hosted by the White House.