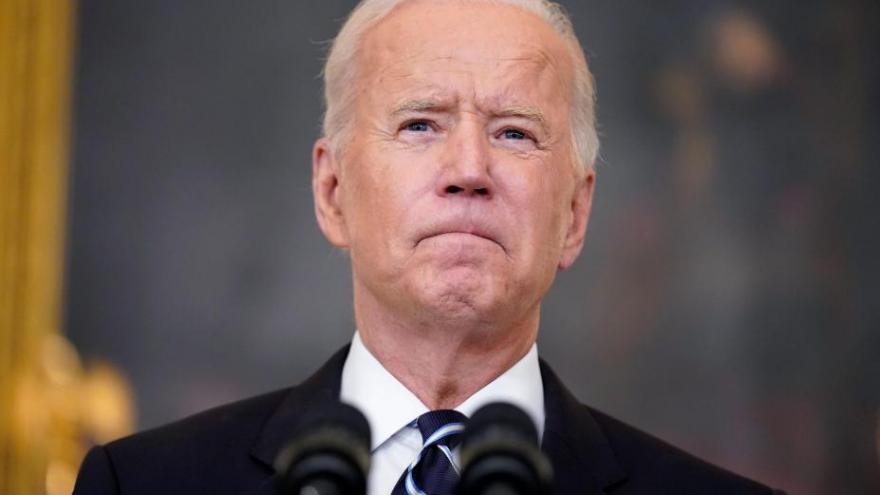 President Joe Biden on Sept. 21 is set to deliver his first speech to the United Nations General Assembly since taking office, where he's expected to present his long-term vision for the global community, defend the withdrawal from Afghanistan and emphasize the importance of reestablishing alliances.

(CNN) -- President Joe Biden on Tuesday delivered his first speech to the United Nations General Assembly since taking office, calling the next 10 years a "decisive decade for our world" that will determine the global community's future.

"As a global community, we're challenged by urgent and looming crises wherein lie enormous opportunities if -- if -- we can summon the will and resolve to seize these opportunities," Biden said.

The President said he believes the world stands at an "inflection point in history," arguing that the way the global community responds to pressing challenges like the climate crisis and the Covid-19 pandemic will "reverberate for generations yet to come."

It was a return to many of the themes that Biden has spoken about since entering the White House in January, framing the future of global relations as democracy versus autocracy and emphasizing the US' plans to strengthen relationships with its allies. That commitment is something that many European nations are questioning in the wake of a diplomatic kerfuffle with the French over a new security partnership with the United Kingdom and Australia that cost the US' longest ally billions in a deal for submarines and the mostly unilateral decision by the Biden administration to pull out of Afghanistan by the end of August after 20 years of war, leading to a chaotic withdrawal.

The President said the US was committed to working with allies around the world to collectively tackle these challenges and stressed the importance of working within the framework of multilateral institutions like the United Nations.

"It is a fundamental truth of the 21st century that within each of our countries and as a global community that our own success is bound up in others succeeding as well. To deliver for our own people we must also engage deeply with the rest of the world," Biden said.

The President said: "Our security, our prosperity, and our very freedoms are interconnected in my view as never before. And so I believe we must work together as never before."

Biden's appearance at the assembly in New York came as he continues to deal with a number of foreign policy crises, including blowback from the French over a recent deal to give Australia nuclear-powered submarines, the chaotic US withdrawal from Afghanistan and a bungled US drone strike in Kabul that killed Afghan civilians.

"We've ended 20 years of conflict in Afghanistan, and as we close this period of relentless war we're opening a new era of relentless diplomacy, of using the power of our development aid to invest in new ways of lifting people up around the world, of renewing and defending democracy, of proving that no matter how challenging or how complex the problem we're going to face, government by and for the people is still the best way to deliver for all of our people," Biden said.

He said the US is turning its focus to the Indo-Pacific region and is "fixing our eyes on devoting our resources to the challenges that hold the keys to our collective future."

As a part of that shift in attention, the President made clear that he will be looking to use American diplomatic and scientific skills over military power as crises pop up around the globe.

"US military power must be our tool of last resort, not our first and should not be used as an answer to every problem we see around the world," Biden said. "Indeed, today many of our greatest concerns cannot be solved or even addressed through the force of arms. Bombs and bullets cannot defend against Covid-19 or its future variants."

The President on Tuesday focused heavily on the Covid-19 pandemic, which has claimed millions of lives around the globe. He touted the US shipping more than 160 million Covid-19 doses to countries around the world and putting more than $15 billion toward the global Covid response.

Biden said he would be announcing additional Covid-19 commitments on Wednesday at the US-hosted global Covid-19 summit.

The President stressed the urgent need to act to combat the climate crisis and noted his administration had pledged to double the public international financing to help developing nations tackle the climate crisis. Biden said on Tuesday he would work with Congress to double that number again, which would "make the United States the leader in public climate finance."

On Wednesday, he'll convene a virtual Covid-19 summit on the margins of UNGA and on Friday he'll host the first-ever in-person meeting with the Quad collective at the White House -- a group which consists of Japan, Australia, India and the United States.