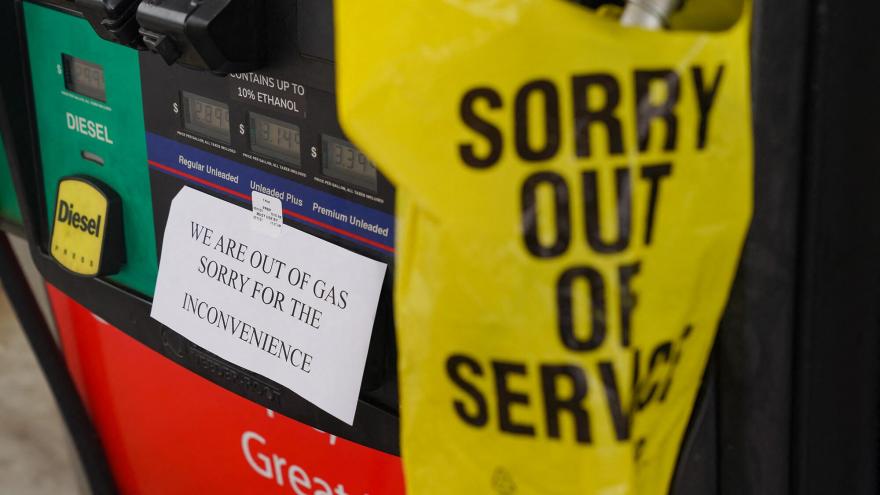 The Biden administration is urging Americans not to hoard gasoline as a growing number of gas stations along the East Coast run out of fuel in the wake of a surge in demand following a ransomware attack on the Colonial Pipeline.

(CNN) -- President Joe Biden said that the fuel situation in the US should be "under control" soon, just minutes before Colonial Pipeline announced it initiated the restart of its pipeline operations following a recent ransomware attack.

The President said the federal government has been in "very, very close contact" with Colonial Pipeline, adding, "I think we'll be getting that under control."

"In the meantime, we've made it easier for us to have lifted some of the restrictions on the transportation of fuel, as well as access to the United States military providing fuel and with vehicles to get it there were places where it's badly needed," Biden added.

In a statement, Colonial Pipeline said, "It will take several days for the product delivery supply chain to return to normal. Some markets served by Colonial Pipeline may experience, or continue to experience, intermittent service interruptions during the start-up period. Colonial will move as much gasoline, diesel, and jet fuel as is safely possible and will continue to do so until markets return to normal."

The restart of operations came after administration officials, including Transportation Secretary Pete Buttigieg, warned Americans against hoarding and improperly storing gasoline as the panic-buying threatens to exacerbate the supply shock.

"This is a time to be sensible and to be safe," Buttigieg told reporters at a White House briefing earlier Wednesday. "Of course, we understand the concern in the areas where people are encountering temporary supply disruptions, but hoarding does not make things better."

RELATED: Why Americans are panic buying fuel -- and why you shouldn't

He continued: "Under no circumstances should gasoline ever be put into anything but a vehicle directly or an approved container, and that of course, remains true no matter what else is going on."

The comments come after the US Consumer Product Safety Commission posted the tweet: "Do not fill plastic bags with gasoline."

Gas stations throughout the Southeast are running out of fuel as Americans continue to panic-buy following the shutdown of the pipeline.

The Colonial Pipeline supplies nearly half the diesel and gasoline to the East Coast, and the FBI says the company was hacked by a criminal group originating from Russia called DarkSide. The company said Monday it hopes to be substantially operational by the end of the week.

"They're asking folks not to panic, not to hoard gasoline and to watch for the updates that are coming to the federal government," Regan told reporters at the White House briefing.

The EPA on Tuesday issued an emergency fuel waiver aimed at easing fuel shortages caused by the shutdown of the pipeline. The waiver allows additional fuel to be moved by tanker truck, among other measures.

Regan at the time cited "extreme and unusual fuel supply circumstances" for waiving certain federal requirements for fuels sold in the District of Columbia, Maryland, Pennsylvania and Virginia. The waiver will continue through May 18.

Energy Secretary Jennifer Granholm pleaded with Americans on Tuesday not to hoard gas as the pipeline attempts to resume operations.

"Let me emphasize that much as there was no cause for say, hoarding toilet paper at the beginning of the pandemic, there should be no cause for hoarding gasoline, especially in light of the fact that the pipeline should be substantially operational by the end of this week and over the weekend," Granholm said during a White House briefing.