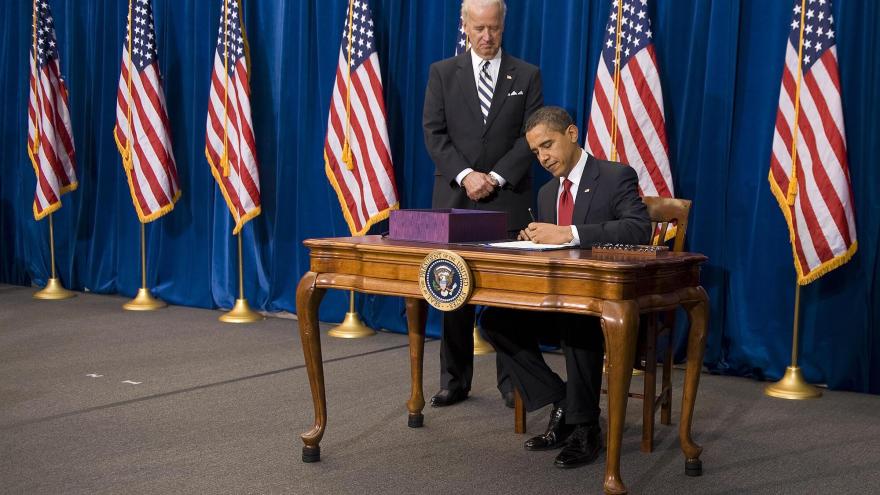 US Vice President Joe Biden stands with US President Barack Obama as he signs the American Recovery and Reinvestment Act at the Denver Museum of Nature and Science in Denver, Colorado, on February 17, 2009.

(CNN) -- When President Joe Biden intensifies his attention next week to selling Republicans and Democrats on his coronavirus relief bill, he won't be relying on some of the presidency's most symbolic powers.

Out, for now, are arm-twisting sessions in the Oval Office or rides into a lawmaker's district aboard Air Force One. Instead, administration aides are planning remote television hits from the White House, out-of-the-blue phone calls to skeptical Republicans and maybe a stop somewhere within driving distance, according to officials.

Hamstrung by the very pandemic he is working to contain, Biden and his advisers have sharply limited the ways in which he can promote the $1.9 trillion relief bill he has proposed in the opening days of his presidency. Flying around the country to sell the plan is off the table for now, aides said, as Biden works to promote responsible pandemic behavior. Even the idea of visiting the weekly Democratic and Republican Senate luncheons on Capitol Hill is a non-starter, aides said, though -- like Biden -- many members of Congress have been vaccinated.

It's not necessarily how Biden would like to be ushering his debut legislative attempt through Congress, particularly since he built an entire career as a senator around attempts to foster bipartisanship through camaraderie on Capitol Hill. So, too, will his famous personal touch with middle-class Americans be sidelined as Air Force One remains in the hangar at Joint Base Andrews. He and his then-boss President Barack Obama used both while mustering support for the 2009 stimulus plan in the earliest days of that administration.

"The irony is that the virus is the core challenge he is trying to address," David Axelrod, a senior adviser to the Obama administration during its economic stimulus push, said Friday. "It also limits his ability to travel and sell it."

There is no greater measure of success for the first chapter of the Biden administration than the outcome of his "American Rescue Plan." If passed with Republican support it could provide a boon to Biden's visions of "unity," the vague but aspirational motto of his administration.

That's left Biden's aides scrambling for ways to use the bully pulpit in the time of a pandemic.

"It is vital for the President and the vice president and every member of our team to be speaking directly to the American people, and so we're looking for creative ways to do that," press secretary Jen Psaki said on Friday.

So far that has amounted to telephone calls from Biden to on-the-fence lawmakers, some remote interviews with the vice president in the home television markets of moderate Democrats and outreach to governors desperate for more financial assistance.

"He called me out of the blue," Sen. Susan Collins, a moderate Republican from Maine, said on Thursday. "We had a very friendly, good conversation. We talked briefly about the Covid bill, but it was mainly just a friendly chat."

Biden's events during his first week in office have all looked remarkably similar: most have occurred in the State Dining Room, with a portrait of Abraham Lincoln and a fireplace mantle as the backdrop, while Biden reads a speech about that day's executive actions. When he made a pitch for the relief package on Friday, he was joined by his own vice president and Treasury Secretary, not skeptical Republicans.

Remote camera set-ups have also been tested in various White House rooms, officials said, including the Library on the basement level, for Biden to make his pitch on television without having to leave the building.

Still, the White House is taking coronavirus precautions remarkably seriously, which could complicate selling Biden's agenda. While Democratic officials on Capitol Hill say the discipline is a welcome change from the Trump administration, which all but ignored the virus, they do question whether it has hampered the Biden team.

"The coronavirus pandemic has paralyzed some of their outreach efforts," one top Democrat said, speaking on condition of anonymity to avoid alienating the Biden administration.

No travel -- for now

Though the President has received two doses of the Moderna coronavirus vaccine, as have his vice president and most top White House officials, he will remain grounded in Washington to demonstrate recommended safety measures preventing the spread of the virus, according to White House aides.

Officials acknowledge privately there are ways for the President and Vice President Kamala Harris to travel safely, just as they did during the final stretch of last year's campaign. But for now, advisers believe that keeping them off airplanes and close to Washington is better in order to model the behaviors health experts recommend to prevent contagion.

One official noted the US Centers for Disease Control and Prevention continues to warn against travel, though plenty of Americans continue to pass through airports on a daily basis. Another White House aide likened the decision not to travel to the President wearing a mask in public.

"He is modeling good behavior, unlike Trump," one official said.

Biden and Harris could venture into communities around Washington that would not require flying, another official said, hoping to make the case for the Covid relief package in communities that still desperately need government help.

But final details haven't been worked out. And in listing Biden's schedule for next week, Psaki made no mention on Friday of trips outside of Washington.

"Certainly his preference would be to get on a plane and fly around the country, but that's not the step we're planning currently," she said.

In lieu of travel, top administration officials have turned to the airwaves -- participating in more than 60 national TV interviews in the last week to pitch the coronavirus relief package, on top of dozens more local TV interviews, a White House official said.

Harris did a handful of local news interviews in Arizona and West Virginia; White House communications director Kate Bedingfield took her pitch to "The View" on Friday; and Cedric Richmond, the White House's public engagement director, has also made the rounds.

The White House is also working to drum up support among key local officials, including a bipartisan group of mayors in Florida who plan to pen an op-ed in support of Biden's relief bill.

"We are going to leave everything on the field -- Covid or not," a White House official said.

It's a far cry from 12 years ago, when Obama and Biden hit the road to build public support for the economic stimulus plan -- or opened the doors of the White House theater to watch the Super Bowl with a bipartisan congressional contingent.

Biden himself touted the plan on the crumbling Route 34 bridge spanning the Conodoguinet Creek outside Harrisburg, Pennsylvania, a few weeks before its eventual passage.

"In the end of the day, this debate is not about Washington. It's about you," he said afterward. "It's about Pennsylvania, Delaware, California, Montana. It's about people out there who played by the rules, done almost everything right, are being swamped by an economy that is -- there's nothing much they can do about it."

When Biden and Obama touted the bill's success at an event in Denver, the President praised his deputy's work "behind the scenes" to get it passed.

This time around, most of Biden's work cajoling members of Congress occur remotely. Biden has spoken to a number of Republican and Democratic lawmakers over the phone since taking office, but has not yet invited any to the White House.

In a private Senate GOP conference call Wednesday, several key Republican senators -- including Collins and Rob Portman of Ohio -- expressed concern with the direction of the relief plan and questioned whether Biden's team was serious about a bipartisan deal, according to two people familiar with the call.

Biden spoke with both Collins and Portman on the phone, and has communicated with other Republicans. He said Friday he'd like to pass the measure with Republican support but that time was of the essence.

"I support passing Covid relief with support from Republicans if we can get it. But the Covid relief has to pass," he told reporters on the White House South Lawn. "There's no ifs, ands or buts."