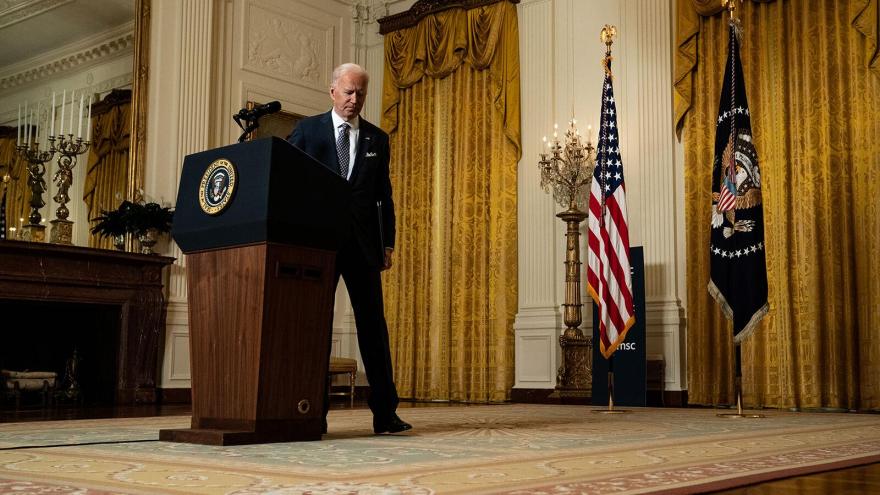 Technicians work on the stage before the start of the Conservative Political Action Conference (CPAC) in Orlando, Florida.

(CNN) -- President Joe Biden sent a letter to congressional leadership Saturday explaining the reasoning behind Thursday's airstrike in Syria, which has been criticized by some Democrats in the latest fight between the executive and legislative branches over war powers.

In the letter, which fulfills an obligation of the President listed in the War Powers Resolution, Biden outlined the details of the strike -- the US military's first known action under his administration -- and said the action was "pursuant to the United States' inherent right of self-defense as reflected in Article 51 of the United Nations Charter."

White House press secretary Jen Psaki said Friday that the Department of Defense briefed congressional leadership ahead of the strike. "The Administration has been briefing the Hill at the Member- and staff-level today. There will be a full classified briefing early next week at the latest," Psaki said while traveling with the President to Texas.

"At my direction, on February 25, 2021, United States forces conducted a targeted military strike against infrastructure in eastern Syria used by Iran-supported non-state militia groups," Biden wrote in the Saturday letter to House Speaker Nancy Pelosi and Sen. Patrick Leahy, the president pro tempore of the Senate.

"Those non-state militia groups were involved in recent attacks against United States and Coalition personnel in Iraq, including the February 15, 2021, attack in Erbil, Iraq, which wounded one United States service member, wounded four United States contractors, including one critically, and killed one Filipino contractor."

Biden wrote that the US "always stands ready to take necessary and proportionate action in self-defense, including when, as is the case here, the government of the state where the threat is located is unwilling or unable to prevent the use of its territory by non-state militia groups responsible for such attacks."

His administration has said the strike was in response to Iranian-backed militia groups' rocket attacks on American forces in recent weeks, and was backed by Article II of the Constitution, as well as the Charter of the United Nations.

But some Democrats said that Congress has not passed an authorization for the use of military force specifically in Syria, and previous resolutions passed in 2001 and 2002 were designed for attacking those responsible for the September 11, 2001 attacks and to go into war with Iraq. Congress has not declared war since 1942.

"This makes President Biden the seventh consecutive US president to order strikes in the Middle East," said California Democratic Rep. Ro Khanna. "There is absolutely no justification for a president to authorize a military strike that is not in self-defense against an imminent threat without congressional authorization."

For years, as the US struck sites in Syria and elsewhere, some members of Congress pushed to repeal a broadly interpreted 2001 AUMF and pass a more narrowly defined war powers resolution.

A National Security Council spokesperson said that the administration went through a "rigorous process to include legal review of the strikes conducted," and said "the strikes were necessary to address the threat and proportionate to the prior attacks."