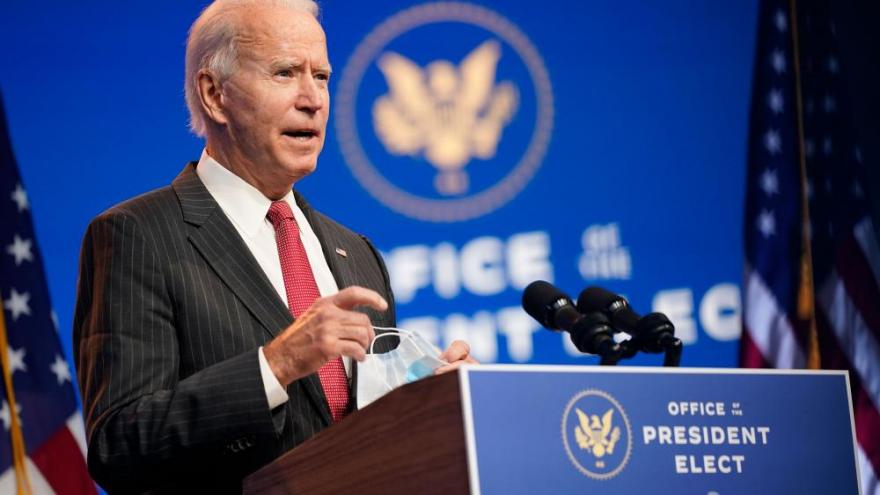 (CNN) -- President-elect Joe Biden marks a milestone on his path to the White House Monday when he gets his first President's Daily Brief -- the intelligence community's collection of secrets, intelligence, and analysis about long- and short-term threats US leaders need to know to run the country and keep it safe.

President Donald Trump, who has refused to concede the election, relented only last week on his initial refusal to allow Biden access to the nation's most vital intelligence -- a tradition based on US national security interests to ensure the election's winner and their incoming team are as ready as possible to cope with global threats and challenges. In 2016, Trump received his first PDB, as it is known, a week after the election.

Vice President-elect Kamala Harris will get the same briefing on Monday with Biden, the transition team said Wednesday, ending the strange situation where she, as a member of the Senate Intelligence Committee, had access to more classified intelligence than the President-elect.

Monday's briefing could give Biden and Harris their first deep insight into urgent questions -- including how Iran is planning to respond to the assassination of its premier nuclear scientist and what is known about that killing -- and on longer term strategic concerns. How is North Korean leader Kim Jong Un's health? Is a fringe terror group showing signs of developing larger ambitions?

Former officials who know Biden said he will be a disciplined and enthusiastic consumer of both the written materials and the oral briefing that accompanies them.

"From my experience with then-Vice President Biden, he was an avid reader and in general a voracious consumer of intelligence," said Obama's last director of national intelligence, James Clapper. "I'm sure he will be especially so as President."

Biden's approach will mark another contrast to Trump, who has skipped getting the PDB every day, and rarely reads the written materials, preferring oral briefings on certain intelligence issues, according to the Washington Post.

Vinograd, now a CNN national security analyst, said that for Biden, "unlike President Trump, the PDB is not going to be an 'if I feel like it' kind of activity. In my experience with then Vice President Biden, the PDB was a must-do."

The PDB contains the daily collection of analysis and information that the intelligence community believes the President and his most senior national security staff need to start the day -- it's been called the newspaper with the world's smallest circulation.

The intelligence briefers come in during the middle of the night to prepare for their early morning sessions with these senior customers -- studying the PDB material, reviewing raw intelligence and other finished analytic products, and asking experts questions that they anticipate getting during their sessions.

The intelligence community can also use the PDB as a way to flag threats it sees coming that may not be on a leader's radar. Typically, the written materials are accompanied by a verbal briefing that gives the President a chance to ask questions and better understand analyses.

Biden and his team had received more sporadic strategic and election threats briefings from different ODNI officials during the fall campaign but now, Biden has said, he will get these more detailed PDB intelligence briefings on "a regular basis."

Traditionally, the president-elect has gotten a copy of the sitting president's PDB, said David Priess, a former CIA officer who served during the Bill Clinton and George W. Bush administrations and is the author of "The President's Book of Secrets," about the PDB.

But intelligence officers briefing a president-elect always supplement those materials with additional information to get the incoming leader up to speed, Priess said. PDB's are profoundly detailed, but the supplemental materials and briefings are meant "to help it make sense in the full." In Biden's case, Priess adds, "to where we last left off."

Vinograd said Biden's past experience in office and with the briefings means "he's not going to have a steep learning curve when it comes to intelligence."

The briefers designated for Biden and Harris can also offer more material and deeper analysis on issues the two care about. If Biden were, for example, particularly interested in what the intelligence community knows about the Iranian nuclear scientist's assassination, which Iran has blamed on Israel, he could ask for more of the latest information on the Iranian nuclear program.

Priess notes that it's possible that Trump might move to limit the content of Biden's briefings, just as he chose not to share the PDB at all, even after it was clear to most of the country that Biden had won.

"There is always the prospect that the President can choose not to share the PDB with the president-elect," Priess said. "That's merely a tradition of good government, not in statute ... and there's nothing to say he can't restrict which items go to the president-elect."

Priess adds that he doubts Trump "will do anything that micromanaging," particularly as most reports suggest the President isn't a detailed reader of the PDB.

While it's not clear where Biden and Harris will receive their briefing on Monday, they are usually delivered in a secured room known as a Secure Compartmentalized Information Facility, or SCIF, which could be built for Biden at his residence or take place elsewhere in Wilmington, possibly in a federal government building, if not in Washington. Sometimes, as when the president is on vacation, the rules are more relaxed and a briefing could even happen outside.

The complex work of assembling the daily briefings is overseen by the director of national intelligence and the finished product that reaches the President's desk can take many different forms, depending on the commander in chief's preference, including bound books, special iPads, spiral notebooks and leatherbound binders.

At first, Biden will get his written version of the PDB in whatever form Trump receives it, Priess said. "Biden will get whatever Trump is getting until January 20 and by then, his briefers will have figured out what format is best for him," Priess said.

Some of Biden's nominees for senior national security positions, including Antony Blinken, his nominee to be secretary of state, and Jake Sullivan, tapped to be national security adviser, could also start to receive briefings -- if Trump allows.

"In the last couple of transitions, the default is that as officials are nominated for positions that will receive the PDB once in office, they're generally allowed to start seeing the PDB," Priess said. He cautions that "that's what's happened in past transitions. We will see what this President does."

In addition to possible briefings, Trump national security adviser Robert O'Brien and his deputy, Matthew Pottinger, are set to schedule meetings with Sullivan and one or two of his deputies in the coming days to discuss some of the most critical national security issues facing the incoming administration, a US official tells CNN.