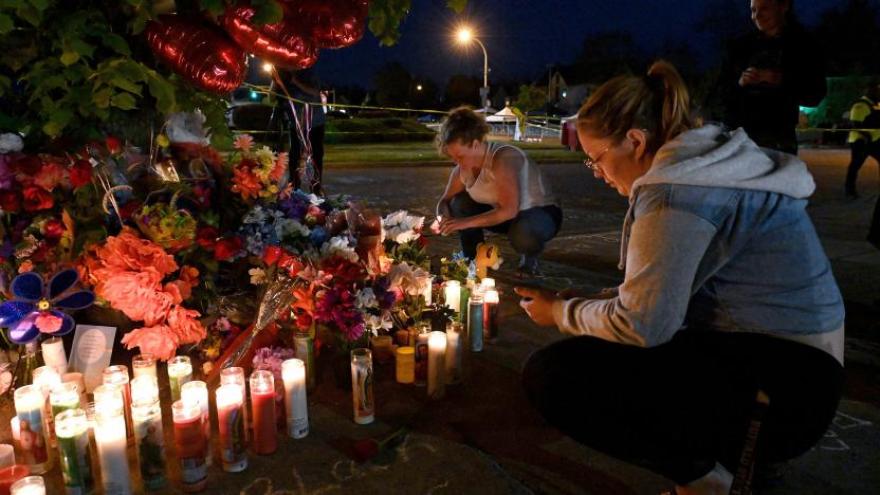 More than three years after announcing he was motivated to run for office to redeem "the soul of the nation" from a surge of White nationalism, President Joe Biden is set to visit another American city marred by an act of violent racism.

(CNN) -- President Joe Biden on Tuesday did not hesitate to call the deadly mass shooting in Buffalo, New York, an act of domestic terrorism, condemning the racist ideology of the suspected shooter.

"White supremacy is a poison. It's a poison ... running through our body politic," Biden said, adding that silence is "complicity."

"And it's been allowed to grow and fester right before our eyes," he continued. "No more, no more. We need to say as clearly and as forcefully as we can that the ideology of White supremacy has no place in America. None."

He added, "In America, evil will not win, I promise you. Hate will not prevail. White supremacy will not have the last word. The evil did come to Buffalo and it's come to all too many places, manifested in gunmen who massacred innocent people in the name of hateful and perverse ideology, rooted in fear and racism. It's taken so much."

Speaking at the close of his visit to the city, the President remembered each of the victims of the shooting at a grocery store frequented by a largely Black clientele, becoming visibly emotional as he described how they were remembered by their families and their community.

Among the victims, he described how Celestine Chaney was in the store to buy strawberries to make a shortcake, how Roberta Drury moved back home to help her brother who had a bone marrow transplant and was buying groceries for dinner, and how Andre Mackniel "went to buy his 3-year-old son a birthday cake."

The President said at the root of the violence is hate fomented by "the media and politics, the internet, has radicalized angry, alienated, lost and isolated individuals into falsely believing that they will be replaced ... by The Other, by people who don't look like them and who are, therefore, in the perverse ideology that they possess and (are) being fed, lesser beings."

Biden said he rejects "the lie" of White supremacy and called on all Americans to do the same. And he condemned figures "who spread the lie for power, political gain and for profit," but he didn't name specific individuals.

The President also harkened back to the chant heard at a deadly White supremacist rally in Charlotteville, Virginia, where demonstrators were heard saying, "You will not replace us." The President has long said that the rally served as the impetus of his 2020 run.

Pressed on whether Republicans who have promoted the replacement theory deserve blame, Biden told reporters ahead of his departure from Buffalo, "I believe that anybody who echoes replacement is to blame. Not for this particular crime, but it's for no purpose ... except profit and or political benefit. And it's wrong. It's just simply wrong."

Earlier Tuesday, the Bidens visited a memorial site for the victims, where the first lady placed a bouquet of flowers and the first couple bowed their head in a moment of silence.

The President also addressed gun violence in America during his events in Buffalo -- the nation has seen at least 198 mass shootings in 2022 alone per the Gun Violence Archive, which -- like CNN -- defines a mass shooting as four or more people shot, not including the shooter.

Josh Geltzer, deputy homeland security adviser at the National Security Council, on Tuesday suggested new executive actions on guns could be coming but did not elaborate.

"We have a firearms problem in this country," Geltzer told CNN's Kaitlan Collins on "New Day." "This weekend drove that home, not just in Buffalo, but elsewhere in the country. And so you will hear more from the President about how we will continue to use executive action where we can to try to protect Americans."

But on the tarmac before heading back to Washington on Tuesday, Biden conceded that there were limited steps left that he could take on to address gun reform through executive action.

"Not much on executive action," he said, but added that he has "to convince Congress that we should go back to what I passed years ago."

Meaningful gun reform, Biden added, is "going to be very difficult, but I'm not going to give up trying."

Buffalo shooting being investigated as a hate crime

Saturday's massacre in Buffalo is the latest high-profile mass shooting in which authorities have said the suspect was motivated by hate, including attacks at a Walmart in El Paso, Texas; the Tree of Life Synagogue in Pittsburgh; Emanuel African Methodist Episcopal Church in Charleston, South Carolina; and the Pulse nightclub in Orlando.

The 18-year-old suspected of opening fire at a Tops Friendly Markets store in a predominantly Black neighborhood told authorities he was targeting the Black community, according to an official familiar with the investigation. He traveled from another New York county hours away and livestreamed the attack on the social media platform Twitch. He had plans to continue his shooting rampage and kill more Black people, authorities said on Monday.

The suspect, Payton S. Gendron, has pleaded not guilty to a charge of first-degree murder, and the district attorney has said he expects to file more charges. Gendron is in custody without bail and under suicide watch. If convicted, he faces a maximum of life in prison without parole.

The US Department of Justice is investigating the mass shooting "as a hate crime and an act of racially motivated violent extremism," according to a statement from US Attorney General Merrick Garland. The FBI is assisting in the investigation.

A 180-page document attributed to the shooting suspect and posted online before the attack lays out the alleged shooter's motives and shows the meticulous planning that went into the massacre. CNN independently obtained the document shortly after the mass shooting -- before authorities released the name of the suspect -- and law enforcement sources have told CNN its description of guns matches the weapons the suspect used.

"Today, yes, it is a great celebration for so many reasons, so many things," Harris said. "But it is also impossible to ignore that we gather mere days after a horrific act of hate in Buffalo, New York, targeting Black Americans. And you know, it was only last year, as (Ambassador Katherine Tai) said, only last year that I was with the President in Atlanta, mourning the murder of eight people including six who are Asian American women. And sadly, what I said then remains true now. Racism is real in America, xenophobia is real in America. It always has been. Sexism is too."

Biden highlighted his administration's efforts to combat racism and said at the event that "we have to not only talk about how we're going to end the hate, but ... who's responsible for generating it."

"It's not just the wackos who go out there with those guns who get talked into doing something. It's the people who fill their brains with false ideas," he said. "It's people who make them, convince them for their power and their prestige and their money to be able to go out and do these terrible things."

"That's not who we are," Biden continued. "And I'll be darned as long as I'm President of the United States, I'm going to fight like hell and we're going to expose everybody."

This story has been updated with additional reporting on Tuesday.