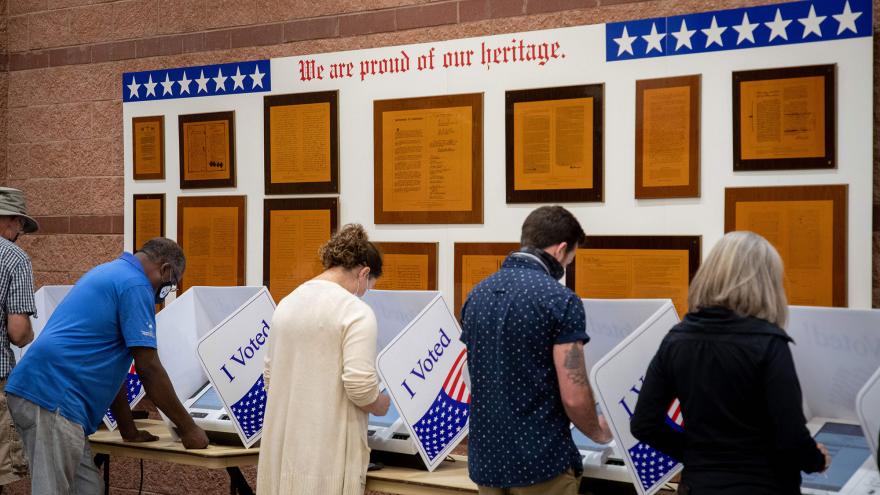 President Joe Biden is expected to sign an executive order Sunday expanding voting access in what the White House calls \"an initial step in this Administration\'s efforts to protect the right to vote and ensure all eligible citizens can freely participate in the electoral process.\" Voters are shown casting their ballots at the Charleston Coliseum and Convention Center in North Charleston, South Carolina on October 16, 2020. - Logan Cyrus/AFP/Getty Images

(CNN) -- President Joe Biden signed an executive order Sunday expanding voting access in what the White House calls "an initial step" in its efforts to "protect the right to vote and ensure all eligible citizens can freely participate in the electoral process."

Sunday's order directs the heads of all federal agencies to submit proposals for their respective agencies to promote voter registration and participation within 200 days, while assisting states in voter registration under the National Voter Registration Act. In addition, the order instructs the General Services Administration to modernize the federal government's Vote.gov portal.

"The President's commitment to democracy includes making it easier and more equitable for all eligible Americans to exercise their fundamental right to vote," an administration official told reporters Saturday, adding Sunday's executive order would "leverage the resources of the federal government to expand citizens' opportunities to register to vote, and to learn about and participate in the electoral process."

Biden was expected to announce the order during virtual remarks at the Martin and Coretta King Unity Breakfast, an annual event commemorating "Bloody Sunday," where African American demonstrators demanding the right to vote were brutally beaten by police while crossing Edmund Pettus Bridge in Selma, Alabama.

"For the federal agencies, many of them have footprints around the country, with offices that people, outside the context of a pandemic could walk in and seek particular services," the official told reporters Saturday. We want to make sure that we can maximize the use of that kind of walk-in service and have them be places where people can also register to vote -- the goal is to make registering to vote and voting access as easy as possible."

The executive order also expands voter access and registration efforts for communities often overlooked in outreach, including the disabled, military serving overseas and the incarcerated.

Still, much of the administration's hope for voter protections lies in legislation like HR1. As of February, state legislators in 43 states had introduced more than 250 bills with restrictive voting provisions, according to a tally from the Brennan Center for Justice at New York University.

The official acknowledged Saturday that, in many cases, the President lacks the authority to overturn such provisions at the state level, acknowledging laws like the one recently passed by Georgia's GOP-controlled state House limiting early voting would require an act of Congress.

"The President doesn't have executive authority to prevent a state from taking that kind of action," they said. "That would require congressional action -- so this executive order uses all of the authority that the President has to be able to take steps necessary to make voter registration and voter access easy and straightforward for people, and it also uses the President's bully pulpit to send a message to all the states and to all voters about the importance of democracy."

This headline and story have been updated with Biden's signing of the executive order.