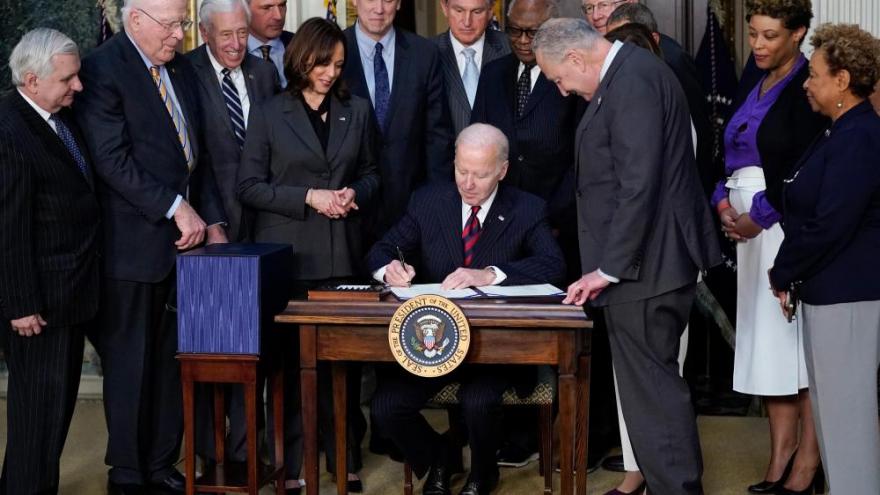 President Joe Biden on Tuesday signed a massive spending bill into law that includes $13.6 billion in new aid to Ukraine.

(CNN) -- President Joe Biden on Tuesday signed a massive spending bill into law that includes $13.6 billion in new aid to Ukraine, saying during a signing ceremony that the new assistance shows the United States is "moving urgently to further augment the support to the brave people of Ukraine as they defend their country."

"Today we're again showing the American people that as a country we can come together, as Democrats and Republicans and independents, and do big things; that our democracy can deliver ... and outperform autocracies, and that there's nothing we can't do when we do it together as the United States of America," Biden told an audience of lawmakers at the White House.

Russia's invasion, Biden said, has "united people all across America, united our two parties in Congress and united the freedom-loving world to act with urgency and resolve that we're doing right now -- that you provided me the ability to do."

Ukrainian President Volodymyr Zelensky will deliver a speech to Congress on Wednesday, where he is likely to renew his calls for steps like a no-fly zone and request help acquiring fighter jets -- steps Biden has previously rejected. And later Wednesday, Biden is expected to detail the US' assistance to Ukraine in remarks.

Speaking on CNN on Tuesday, Deputy Secretary of State Wendy Sherman said Biden would talk "about the security assistance that we have provided, that we are providing. It's just unparalleled in amounts. Anti-tank, anti-aircraft, anti-armor, all kinds of support that the Ukrainians have asked for."

The Senate passed the spending bill, known as an omnibus, late Thursday on a bipartisan vote of 68-31, after having passed three previous stopgap funding bills to keep the government running in the meantime. The omnibus will provide funding through fiscal year 2022, which started in October.

The new funding will provide additional humanitarian, security and economic assistance for Ukraine and allies in the region.

Roughly half of the aid package will be used to deploy troops to the region and send defense equipment to Ukraine, according to a summary of the bill provided by the House Appropriations Committee.

The US has deployed thousands of troops throughout Europe, both before and during Russia's invasion of Ukraine. But putting troops on the ground in Ukraine, which is not a member of NATO, is a line that the US and its Western allies have not been willing to cross.

Much of the other half of the aid will provide humanitarian support for refugees fleeing Ukraine and people displaced within the country, including emergency food assistance, as well as help to respond to the economic needs in Ukraine and neighboring countries, such as cybersecurity and energy issues.

In Tuesday's remarks to lawmakers, Biden touted a record $1.2 billion in security assistance to Ukraine over the past year, acknowledging that while it's been "exceedingly difficult to get supplies in Ukraine while the Russian onslaught continues ... we're managing to get supplies in Ukraine regularly thanks to the bravery of so many frontline workers who are still at their posts."

The President also highlighted some of the spending bill's other provisions, which include reauthorizing the Violence Against Women Act as well as additional funding for opioid response grants and mental health services.

The spending bill also calls for more than $1.5 trillion in annual appropriations, excluding the Ukraine aid. That's more than a 6% increase from the year before, according to the Committee for a Responsible Federal Budget.

The omnibus does not include additional Covid-19 response-related funding.

The Biden administration requested $22.5 billion in supplemental Covid-19 relief funding in the massive government funding package. Negotiators had proposed a scaled-back $15.6 billion for Covid relief, but following pushback on both sides of the aisle, House Speaker Nancy Pelosi announced that Covid provisions would be stripped from the funding bill, which passed late last week. House Democrats have introduced a standalone Covid relief bill, but it does not currently have the votes to pass both chambers.

Should Congress fail to act, Zients added, "it would result in severe consequences" for efforts toward treatment, testing, vaccines, efforts to help deliver more vaccines globally and fight future variants -- all key to President Joe Biden's national preparedness plan for the next state of the pandemic outlined earlier this month.