Biden spoke with Obama and Bush ahead of Afghanistan withdrawal announcement 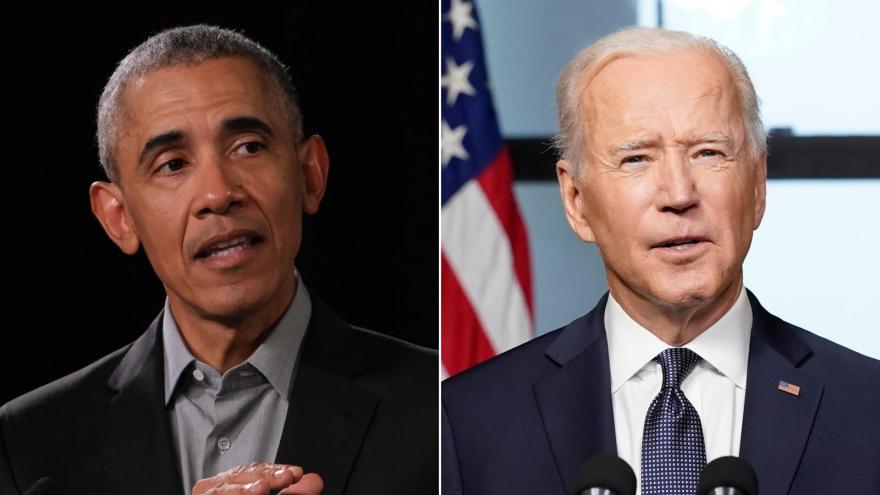 (CNN) -- President Joe Biden spoke with two of his predecessors ahead of his Wednesday announcement that he will withdraw US troops from Afghanistan by September 11, drawing an end to America's longest war.

The separate phone conversations between the President and former Presidents Barack Obama and George W. Bush as Biden prepared to make the announcement underscore the longevity of the conflict, which has spanned four presidential administrations and nearly 20 years.

"He values their opinions and wanted them both to hear directly from him about his decision to withdraw troops from Afghanistan," White House press secretary Jen Psaki said Wednesday of Biden's calls with Obama and Bush.

While Bush -- who announced the start of the war on October 7, 2001 -- declined to comment on his call with Biden, his spokesman Freddy Ford told CNN that the former President and first lady Laura Bush "remain committed to honoring and supporting our post-9/11 veterans and empowering women in Afghanistan through their work at the Bush Institute."

In a nod to Bush's role in starting the nearly 20-year war, Biden delivered his remarks on the withdrawal plan from precisely the same spot in the White House Treaty Room that the 43rd President announced the start of the war on October 7, 2001.

The conversation between the nation's 43rd and 46th Presidents was brief, according to two officials familiar with the call, who also described it as warm and cordial.

Obama, meanwhile, praised Biden's "bold leadership" for his decision to withdraw US troops from Afghanistan, saying that "it is time to recognize that we have accomplished all that we can militarily" in the country.

"President Biden has made the right decision in completing the withdrawal of US forces from Afghanistan," Obama said in a statement moments after Biden made his first public remarks on the decision.

Though he did not reference his call with Biden in the statement, Obama said, "I support President Biden's bold leadership in building our nation at home and restoring our standing around the world."

That support carries symbolic weight, as Biden, then serving as Obama's vice president, had argued ardently to Obama that troops should be drawn down in 2009.

At one point that year, he hand-wrote a memo to Obama arguing for a withdrawal and faxed it to the White House from his Thanksgiving vacation on Nantucket. He made various attempts to argue his case to Obama, who chose instead to surge troops before eventually pulling many of them out.

Biden said Wednesday that the withdrawal will begin on May 1, in line with an agreement President Donald Trump's administration made with the Taliban. He said the complete withdrawal will be done by September 11. Some US troops will remain to protect American diplomats, though officials declined to provide a precise number.

After formally announcing the decision, the President visited the section of Arlington National Cemetery where many of America's war dead from Afghanistan are buried, where he saluted a wreath that was placed there.

This story has been updated with additional details Wednesday.