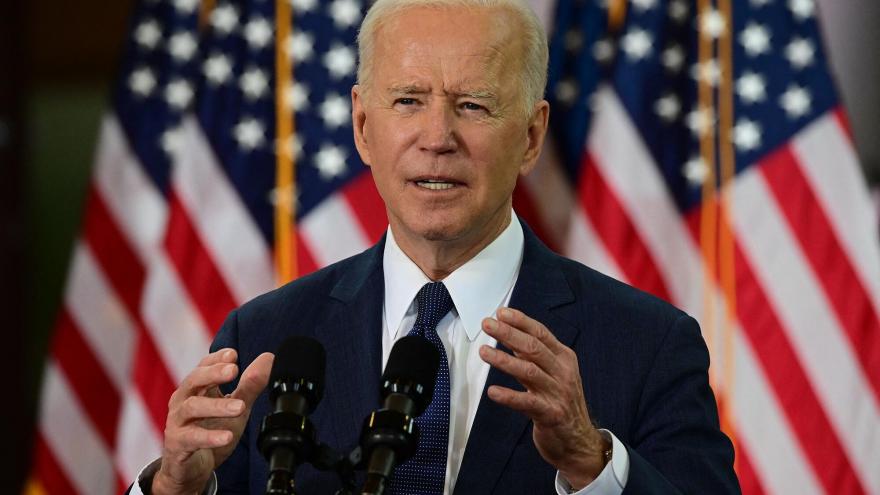 President Joe Biden, seen here in March, will meet with a bipartisan group of lawmakers on April 12 to discuss his roughly $2 trillion jobs and infrastructure proposal, as he faces united Republican opposition to the plan and pressure from Democrats to move without GOP support.

(CNN) -- President Joe Biden on Monday met with a group of lesser-known but influential lawmakers from both parties as he begins his push to get Capitol Hill on board with his infrastructure proposal.

The lawmakers in Monday's meeting were not the names usually associated with Oval Office meetings on major legislative initiatives -- no members of congressional leadership or high-profile moderates were on the invite list. Instead the guest list was made up of lawmakers from both parties who have a history of working on infrastructure and sit on the committees that will shape the proposal as it moves through Congress.

"I'm prepared to negotiate as to how the extent my infrastructure project, as well as how we pay for it," Biden said during the Oval Office meeting, adding that he believes it's universally accepted that the US needs investments in the area.

"It's going to get down to what we call infrastructure," Biden added, saying he thinks replacing lead pipes and investing in broadband counts as repairing the nation's infrastructure, and that "it's not just roads, bridges, highways, etc."

Biden and Vice President Kamala Harris met with four Republicans and four Democrats on Monday afternoon. Among them are Democratic Sen. Maria Cantwell of Washington, the top chairwoman of the Senate Committee on Commerce, Science and Transportation; and her Republican counterpart on the committee, Sen. Roger Wicker of Mississippi.

Also in the meeting were Democratic Rep. Donald M. Payne Jr. of New Jersey and Republican Rep. Garret Graves of Louisiana, who both sit on the House Committee on Transportation and Infrastructure. GOP Sen. Deb Fischer of Nebraska, Democratic Sen. Alex Padilla of California, Republican Rep. Don Young of Alaska and Democratic Rep. David Price of North Carolina, who also all sit on committees relevant to the key parts of Biden's proposal to rebuild the nation's crumbling infrastructure, also attended.

Price told CNN later Monday that during the two-hour meeting, some of the lawmakers in the room made clear that the "scope of the definition of infrastructure, the breadth of the bill, is an issue." He added that while there was some discussion about breaking the bill into multiple parts with the hope of passing at least some of it with bipartisan support, no real progress was made on that front.

Padilla, meanwhile, said in a statement following the meeting that it "was an encouraging step" in the debate over the infrastructure proposal.

Notably missing from Monday's meeting were moderates Sens. Joe Manchin of West Virginia, Lisa Murkowski of Alaska and Susan Collins of Maine. Manchin, a Democrat, and Murkowski and Collins -- both Republicans -- are key figures in the Senate who sometimes act as swing votes on legislation. Manchin has pushed the White House to get more Republican support and has suggested he opposes using the reconciliation process to pass the package without GOP votes.

White House economic adviser Jared Bernstein said Monday morning on CNN's "New Day" that the lawmakers chosen for the first meeting "have a long history of sitting on committees that oversee investments that they themselves have long said need to be made," pointing to the electrical grid, water infrastructure and broadband access.

The GOP senators in the meeting signaled afterward that they don't anticipate much cooperation on one key aspect of the plan.

Wicker said on Monday afternoon that Biden is not going to find Republican support for the corporate tax hike he's proposed.

"It would be an almost impossible sell for the President to come to a bipartisan agreement that included undoing that signature law," Wicker said. "I did tell him that. He disagrees."

Biden's proposal currently includes raising the corporate income tax rate to 28%, up from 21%, which would fulfill one of his core campaign promises. The rate had been as high as 35% before former President Donald Trump and congressional Republicans cut taxes in 2017. Biden has touted his package as a "once-in-a-generation investment in America." It invests in manufacturing, transportation, research and development, bolstering caregiving for aging and disabled Americans and building new public schools and upgrading existing buildings.

But, some Republicans on the Hill are balking at the proposal's price tag and take issue with its broad definition of infrastructure and a proposed corporate tax hike. Democrats also remain divided over details of the proposal and the best way to shepherd it through both chambers.

Payne told reporters in a press call after the meeting that it seemed his Republican colleagues were "kind of surprised" by how willing Biden was to negotiate the package.

Although Biden did not appear open to lowering the tax rate, Payne said the President is "willing to discuss it."

The congressman also said Biden had talked about a potential gas tax and mentioned the 58 largest companies that did not pay any taxes last year, but an administration official clarified later Monday that during the meeting, the President was not endorsing a gas tax increase to pay for his infrastructure plan.

The official added that Biden had raised the notion of the gas tax to explain why it wouldn't be sufficient to pay for the plan if the corporate tax increase were scrapped.

Wicker, meanwhile, said the meeting was a "lively discussion" in which Biden was "highly engaged" and the President did a lot of the talking. He said it's still an open question on whether there will be a bipartisan deal, even as they discussed shared priorities such as improving rural broadband and water infrastructure.

Wicker said they did not discuss reconciliation, but he said Biden resisted paring back the price tag.

"He says the US is a declining superpower. We are no longer No. 1," Wicker said. "I just have a fundamental disagreement with that.

Fischer told reporters she urged Biden to go "segment by segment" on infrastructure but the President didn't indicate a willingness to go that route. Fischer added the White House staff plans to reach back out to her to discuss the concerns she raised.

"There's quite a distance that we need to address," Fischer said.

The President has warned that inaction on the country's infrastructure is not an option, suggesting if he doesn't garner the necessary bipartisan support he could attempt to move forward with the same process that allowed him to pass his sweeping $1.9 trillion Covid-19 relief package without any Republican votes. The reconciliation process would only require a simple majority instead of 60 votes in the Senate. Democrats have very narrow margins in both the House and Senate, which makes every vote within their own party essential.

Biden's infrastructure and jobs plan is the first of a two-part proposal to help the nation's economy recover from the coronavirus pandemic. The other is expected to be a set of investments aimed at helping American workers and boosting education.

To bolster its case, the White House on Monday released state-by-state fact sheets outlining the number of bridges and miles of road in poor condition, the share of households without access to broadband and the funding needed for water infrastructure, among other needs. The reports also cite how many residents pay more than 30% of their income on rent, what share live in a so-called childcare desert, how many work in clean energy jobs and how many veterans live in the state.

Biden's home state of Delaware received a D grade, while California, where Harris is from, received a C-. The Golden State alone has more than 1,500 bridges and 14,200 miles of highway in poor condition. Most states received C-range grade, though several were in the D-range. Georgia and Utah received the highest score -- a C+. A few states were not given a letter grade.

The American Society of Civil Engineers gave the US a C- in its 2021 infrastructure report card, released in March. It's the first time that the nation received a grade higher than the D range since the survey began in 1998. The cost to bring it into good repair comes to nearly $2.6 trillion over 10 years, the society said.

This story has been updated with additional developments on Monday.