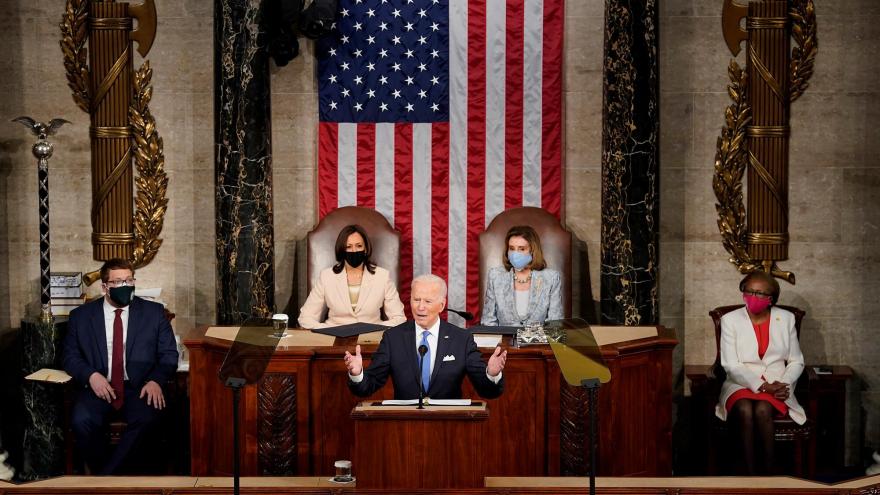 President Joe Biden hit the road on April 29, traveling to Georgia to promote his sweeping economic proposals the day after making the case for the massive new government programs in his first address to a joint session of Congress.

(CNN) -- President Joe Biden hit the road on Thursday, traveling to Georgia to promote his sweeping economic proposals the day after making the case for the massive new government programs in his first address to a joint session of Congress.

At his first tour stop, a drive-in rally in Duluth, Biden highlighted the accomplishments of his administration's first 100 days and touted his next legislative push, which is centered on infrastructure and the caregiving economy.

"As much as we've done, we've got a lot more to do. And that's why I've proposed the American Jobs Plan. It's a once-in-a-generation investment in America," he told rally-goers. "It's the biggest jobs plan in this country since World War II."

Biden also pointed to his American Jobs Plan as a chance to bring "equity across the board."

The trip was part of what White House officials are calling the "Getting America Back on Track" tour and comes as the White House pushes the roughly $2 trillion infrastructure and jobs plan and a $1.8 trillion plan for children and families. The rally took place in the state that gave Democrats control of the Senate and allowed the President's legislative priorities to become reality. Biden was also the first Democrat to win the presidential election in Georgia in decades.

In his most overtly political remarks since taking office, Biden thanked early endorsers from the state and credited Georgia's newly elected Democratic senators for the narrow passage of the American Rescue Plan, Biden's coronavirus relief package signed into law in March.

"The American Rescue Plan would not have passed. So much have we gotten done, like getting checks to people, probably would not have happened, so, if you ever wonder if elections make a difference, just remember what you did here in Georgia, when you elected (Jon) Ossoff and (Raphael) Warnock. You began to change that environment," Biden said.

"I want to thank you, Stacey, for empowering the people to vote and to make their voices heard," Biden said.

His remarks were disrupted by protesters calling on him to put an end to private detention centers, prompting him to say he was "working on it."

"I agree with you. But I'm working on it, man. Give me another five days," Biden said.

"There should be no private prisons, period -- private detention centers," the President added. "I promise you."

He also told rally-goers that the conviction of former police officer Derek Chauvin in the murder of George Floyd provides an "opportunity to make some real progress to restore the soul of this country."

"We can enact rational police reform. We can root out systemic racism in our criminal justice system," Biden said.

The first stop on the President and first lady's Georgia trip was to Plains to visit former President Jimmy Carter and former first lady Rosalynn Carter. The Carters were unable to attend Biden's inauguration, and this was the first time Biden had met with Carter since becoming president.

Biden laid out the second component of his roughly $4 trillion plan to help the nation's economy recover from the coronavirus pandemic on Wednesday night before Congress. The American Families Plan is a large-scale investment in education, child care and paid family leave.

The proposal would also extend or make permanent enhancements to several key tax credits that were in the Democrats' $1.9 trillion Covid-19 rescue bill, which Biden signed into law last month.

The President has also unveiled a roughly $2 trillion plan — the American Jobs Plan — to heavily invest in the nation's crumbling infrastructure, create jobs and shift the country to greener energy over the next eight years.

It is unclear whether lawmakers will consider Biden's two plans together or separately. It is also unclear whether Democrats will try to pass the legislation the same way they did with Biden's Covid-19 relief bill, which had no Republican support.

Biden has said he is willing to listen to ideas on the proposals and negotiate on how to pay for them. In two weeks, Biden will host House Speaker Nancy Pelosi and Senate Majority Leader Chuck Schumer, along with their Republican counterparts -- Senate Minority Leader Mitch McConnell and House Republican Leader Kevin McCarthy -- at the White House to discuss the proposals. It will be Biden's first meeting with the bipartisan congressional leadership since taking office.

The President has already hosted several lawmakers from both sides of the aisle at the White House to discuss infrastructure.

Biden was scheduled to headline a political event in Georgia last month touting his Covid-19 relief bill but the event was postponed following a series of shootings in the Atlanta area that killed eight people, including six Asian women. The President and vice president instead met with Asian American leaders in the area and visited the US Centers for Disease Control and Prevention.

This story has been updated with Biden's remarks in Georgia.