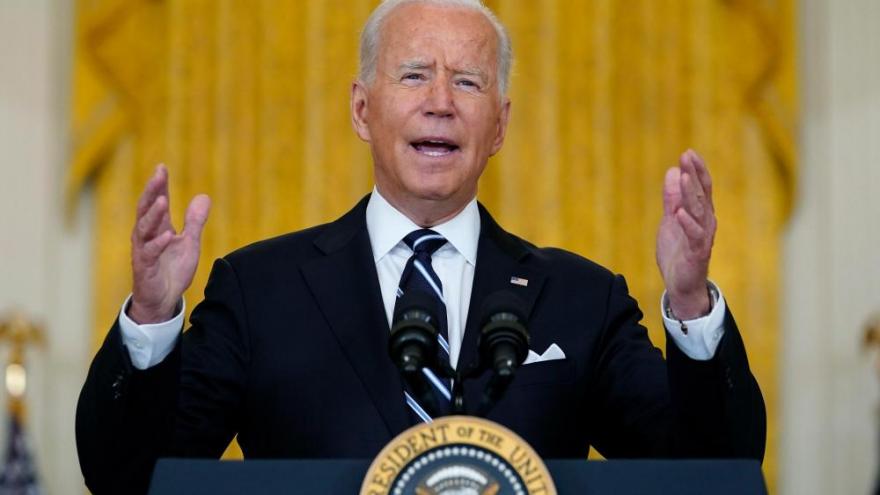 President Joe Biden, pictured in Washington DC, on Aug 18, suggested he’s willing to keep US forces in Afghanistan until all American citizens who want to leave are out of the country, but stopped short of making the same commitment to the US’ Afghan partners.

(CNN) -- President Joe Biden on Wednesday suggested for the first time that he's willing to keep US forces in Afghanistan until all American citizens who want to leave are out of the country, but stopped short of making the same commitment to the United States' Afghan partners.

In an interview with ABC News, Biden said Americans should expect for all US citizens in Afghanistan to be evacuated by August 31, the deadline the administration has set for ending the nation's longest war.

But, he added, "if there's American citizens left, we're going to stay until we get them all out."

The potential commitment to extending American forces' stay in Afghanistan for evacuations past the end of the month does not necessarily apply to extending US-led evacuations for Afghans who worked with the US during the war.

Biden said the US estimates between 50,000-65,000 Afghan partners and their families are trying to get out of the country. In order to get them out of the country before the August 31 deadline, the President said, evacuations will have to ramp up.

Asked if he would keep US troops there if they weren't all out, Biden said, "The commitment holds to get everyone out that, in fact, we can get out and everyone that should come out. ... That's the path we're on. And I think we'll get there."

The President also defiantly defended his administration's execution of the withdrawal of US troops from Afghanistan, saying that he doesn't think the crisis represents a failure and there was no way to better handle the drawdown.

Biden was asked if it was a failure of intelligence, planning, execution or judgment that led to the situation in Afghanistan.

"I don't think it was a failure," the President responded.

He added, "When you had the government of Afghanistan, the leader of that government getting into a plane and taking off and going to another country. When you saw the significant collapse of the Afghan troops we had trained, that was -- you know I'm not -- that's what happened. That's simply what happened."

Asked if he thought the withdrawal could have been handled better, Biden said: "No."

The President said he thought chaos in the country was inevitable after US troops departed.

"(T)he idea that somehow, there's a way to have gotten out without chaos ensuing, I don't know how that happens," he told Stephanopoulos.

But in public statements since the troop drawdown was first announced in April, Biden repeatedly relayed to the American people that the withdrawal would proceed safely and in an orderly fashion.

In April, he said the drawdown would be done "responsibly, deliberately, and safely."

And in July, Biden used a question-and-answer session in the White House to downplay the prospect the Afghan government could collapse and the Taliban could take over, saying that outcome was not inevitable. He indicated that the "drawdown is proceeding in a secure and orderly way, prioritizing the safety of our troops as they depart." And he also insisted there would be "no circumstance" in which American personnel were evacuated from the roof of their embassy, rejecting any comparison to the fall of Saigon.

Asked during the ABC News interview if chaos was "always priced into the decision," Biden initially responded yes, but then added that exactly what happened was not part of his calculation.

"One of the things we didn't know is what the Taliban would do, in terms of trying to keep people from getting out. What they would do. What are they doing now? They're cooperating, letting American citizens get out, American personnel get out, embassies get out, etc., but they're having -- we're having some more difficulty having those who helped us when we were in there," Biden said.

Biden was also asked if the intelligence was wrong of if he downplayed it when he called a takeover unlikely.

"There was no consensus if you go back and look at intelligence reports," the President responded. "They said that it's more likely to be some time by the end of the year."

Earlier Wednesday, Biden was briefed at the White House on the situation in Afghanistan. He also spoke with German Chancellor Angela Merkel about the issue.

The world was shocked earlier this week by images coming from Afghanistan that included people falling from a US Air Force plane taking off from Kabul's airport after attempting to hold on to its exterior to make a desperate escape from the country. When Biden was asked about pictures showing people packed into a C-17 and video of Afghans clinging to the sides of planes attempting to take off from Kabul's airport, he sharply cut off the question.

"That was four days ago, five days ago!" Biden told ABC News. Many of those pictures were from Monday, just two days before the interview was conducted.

Asked what his first reaction was upon seeing the scenes, Biden told ABC that he thought: "We have to gain control of this."

The State Department said it could not ensure safe transit to the airfield, while the Pentagon said the Taliban is "guaranteeing safe passage."

Chairman of the Joint Chiefs of Staff Gen. Mark Milley said during a press briefing on Wednesday that "approximately 5,000 people" have been evacuated from Afghanistan already, and the US military intends to "increase" the number of people who have been evacuated.

Milley said, if directed, US military in Kabul have the ability to extract Americans and bring them to Kabul's Hamid Karzai International Airport. But Secretary of Defense Lloyd Austin clarified that US troops in Kabul do not have the ability to collect and extract "large groups of people."

This story has been updated with additional developments from Biden's interview.