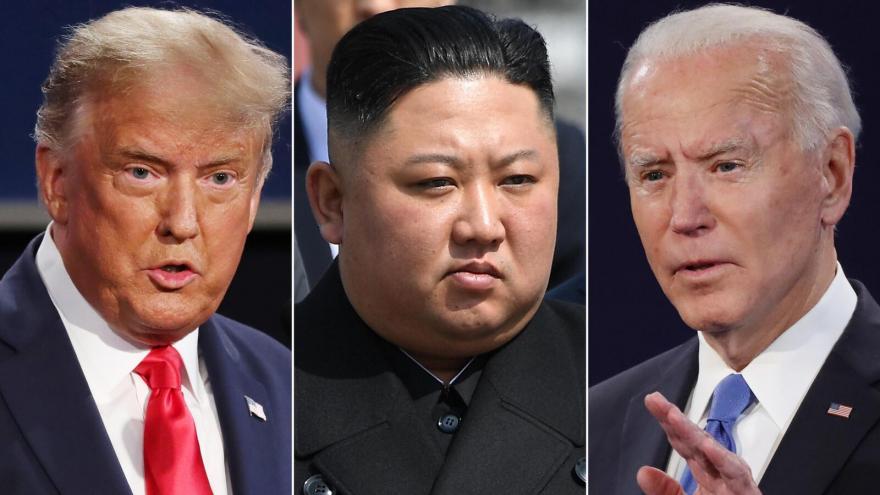 (CNN) -- President-elect Joe Biden's foreign policy team will soon have access to the letters President Donald Trump exchanged with North Korean Leader Kim Jong Un, correspondence that belongs to the US government -- not Trump -- and could provide insight into one of the world's most enigmatic leaders.

"They may help paint a richer psychological portrait of Kim Jong Un and offer insight into his thinking, or at least his approach to his engagement with Donald Trump," said a source close to the transition, adding that the missives are known to be high on rhetoric -- Trump described them as "love" letters -- and much lower on substance.

As Biden has his team review the Trump-Kim letters, the latest intelligence and other information, he will face the same challenge Trump and all his predecessors have: A North Korea determined to continue advancing its nuclear program.

The difference: In the four years since Biden was in government, North Korea has more nuclear arms, better means of delivery and is that much more dangerous.

There are hints about how Biden will approach that challenge -- based on his public remarks, his commitment to multilateral alliances and his staffing choices -- but sources familiar with the transition say he will take time to flesh out a policy after meeting with allies and partners. As he does so, the President-elect will have to deal with potential resistance from Republicans in Congress, an unreliable counterpart in China and the unpredictable nature of North Korea itself, where state media already refer to him as a "rabid dog."

Biden is expected to take a more traditional approach than Trump, drawing in allies and partners instead of going at it on his own. Just weeks before the presidential election, Biden signaled that he is open to engaging with Pyongyang, using the term "principled diplomacy" to describe how he will approach North Korea. His team won't decide exactly how that looks in practice until they have reviewed information about events that happened on Trump's watch, sources familiar with the transition told CNN.

"The transition will be looking to understand as much as they can about what has been happening inside the Trump administration vis-a-vis North Korea," said a second source close to the transition. "From engagement with North Korea, the engagement with Japan, with China, with South Korea, as well as the defense plans and exercises and force posture adjustments."

Tony Blinken, Biden's nominee to be secretary of state, worked on the North Korea portfolio when he was in the Obama administration. Former officials who worked with him said that he appeared to be open to diplomacy with North Korea. He was part of the group that attempted to jumpstart diplomatic conversations with the North Koreans at the end of the Obama administration, an effort which was unsuccessful, they said.

Some South Korean officials and North Korea experts tell CNN they are worried the Biden team will take too long to develop their strategy and allow North Korea to set the tone. Pyongyang often launches missiles in the early days of an incoming administration, which would force Biden's team into a defensive posture, rather than an offensive posture.

The second source close to the transition said, "there is somewhat of an expectation around that," and noted Biden will have to manage the response to any missile launch without getting into a "counterproductive cycle."

The sources familiar with the transition would not say if Biden would consider sending a private message sent to Pyongyang early on in his administration in an effort to prevent any North Korean provocations. They did say Biden wouldn't do so during the transition while Trump is still in the White House.

Part of Biden's North Korea strategy early on will involve repairing strains to the US-South Korea relationship caused by Trump's demand that Seoul pay up to 400% more to keep US troops in the country, the sources said.

Biden's team also believes engaging China is important, the sources familiar with the President-elect's transition said. But working with Beijing will be a hurdle for them just as it was for Trump officials -- particularly given Beijing's recent pattern of ignoring and even abetting North Korea's sanctions violations.

Congress will also have a role to play when the Biden team begins to carry out its North Korea strategy. Democrats on the Hill are concerned Republicans may stand in the way of any Biden effort to draw North Korea by partially reducing sanctions -- a step that would need congressional approval.

"I think our politics is the biggest part of the question as to if we can get North Korea diplomacy up and running," said one Democratic congressional aide. "The President has a huge amount of latitude when it comes to negotiating a deal, but when it comes time to actually moving things around on the table ... if Congress chops the legs out from under a president, it could very be problematic."

Biden may also have to deal with some hostility -- or at least name-calling -- from North Korea. The President-elect called Kim a "thug" during a presidential debate. He has also implicitly compared him to Adolf Hitler, given human rights reports about North Korea that describe say Kim keeps labor camps in his country, uses starvation as a tool of control, and deployed a biological weapon to assassinate family members in public places.

The Trump-appointed State Department Deputy Special Representative for North Korea, Alex Wong, acknowledged Tuesday that effort failed, and that Pyongyang has not engaged in detailed dialogue or made "any concrete steps toward denuclearization."

Out of the box

Trump administration officials also privately admit that North Korea's nuclear program is more advanced now than it was when they came into office. Two current officials told CNN they view the engagement with Kim as a useful exploration of out-of-the-box diplomacy.

But Pyongyang's missile tests have shown that they can now hit the US. And several countries believe Pyongyang has made gains in producing ballistic missiles with small nuclear devices attached, according to a UN report this year.

In late 2017, North Korea claimed to have successfully tested a new type of intercontinental ballistic missile, topped with a "super-large heavy warhead," capable of striking the US mainland. After the launch, Kim said North Korea had "finally realized the great historic cause of completing the state nuclear force."

Then Secretary of Defense James Mattis said the missile test went "higher, frankly, than any previous shot they have taken" and demonstrated that North Korean leader Kim Jong Un now has the ability to hit "everywhere in the world basically."