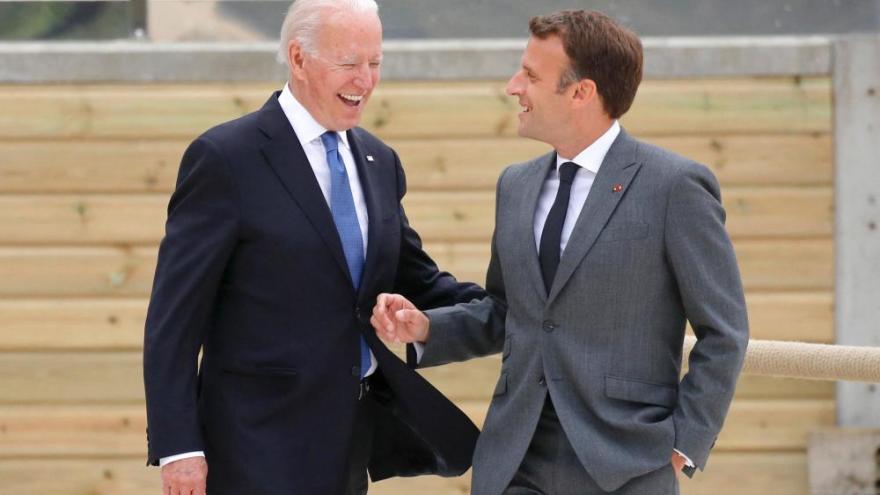 In this June 11, file photo, US President Joe Biden and France's President Emmanuel Macron walk along the boardwalk during the G7 summit in Carbis Bay, England.

(CNN) -- President Joe Biden on Friday admitted that his administration was "clumsy" in its handling of the deal that deprived France of billions in defense contracts.

The comment came during of a closely watched meeting with his French counterpart, Emmanuel Macron, in Rome, meant to repair fractured ties after a rift over an agreement to provide Australia with submarines,

"I was under the impression that France had been informed long before that the deal was not going through, honest to God," Biden said on Friday, sitting alongside Macron in the French Embassy to the Holy See.

Last month, the US, the United Kingdom and Australia announced a new partnership that includes providing assistance to help Australia develop nuclear-powered submarines -- a deal France says was made without its knowledge, jeopardizing an existing contract worth billions to provide Australia with diesel-powered submarines.

The rift escalated to the rare point that France temporarily recalled its US ambassador, and even Biden was caught off-guard by how furious French officials became over the matter.

"I think what happened -- to use an English phrase -- what we did was clumsy," Biden continued. "It was not done with a lot of grace. I was under the impression that certain things had happened that had not happened."

It was a striking admission of a foreign policy misstep for a President with decades of experience in that arena.

Biden called France "an extremely valued partner and a power in and of itself."

"There's too much we have done together, suffered together, celebrated together and value together for anything to be able to break this up. We're at one of those inflection points in world history. Things are changing. Pieces of the board are moving," he added.

When Macron was asked if he was satisfied that the relations with the United States had been repaired, he told reporters, "We clarified together what we had to clarify."

"Now what's important is to be sure that such a situation will not be possible for our future," he added.

The two leaders appeared in good spirits ahead of the meeting, waving to the press and smiling before clapping each other on the shoulder as they walked inside the embassy.

The highly anticipated bilateral meeting between the long-standing allies is taking place ahead of the Group of 20 meeting in Rome and the United Nations' subsequent climate summit in Glasgow. The bilateral follows Biden's earlier meetings on Friday with the Pope at the Vatican and with the Italian president and prime minister.

The location for the meeting -- on French territory in Rome -- is intentional, a diplomatic source told CNN.

White House national security adviser Jake Sullivan told reporters aboard Air Force One en route to Rome that he expected the meeting to be "constructive and deeply substantive," and that Biden and Macron will cover a gamut of issues facing their alliance, from "counterterrorism in the Middle East to great power competition to economic, trade and technology issues."

Sullivan said a "forward-looking" statement is expected to be released following the meeting, which will touch on areas of cooperation, counterterrorism, the Indo-Pacific, energy and technology.

The two leaders are also expected to be in the same room for other meetings throughout the summits.

In mid-September, the two leaders spoke over the phone, appearing to ease some of tensions over the submarine deal.

During the 30-minute call, Biden appeared to acknowledge missteps in how his administration had approached the talks. And, importantly, a joint statement about the call noted that "the two leaders have decided to open a process of in-depth consultations, aimed at creating the conditions for ensuring confidence and proposing concrete measures toward common objectives."

Friday's bilateral meeting marks an opportunity for those consultations to lead to concrete announcements, Célia Belin, a visiting fellow at the Center on the United States and Europe at The Brookings Institution, told CNN.

"The meeting between the two leaders will be the occasion to make some announcements and to see whether or not ... this crisis was the occasion to define ... a new common agenda, or if there are sort of long, lingering issues that cannot be addressed," Belin told CNN.

Sullivan told reporters on Thursday that the Biden administration feels "very good about the intensive engagement that we've had with France over the course of the past few weeks," noting his own recent visit to Paris, the President's two calls with Macron since the submarines spat and Secretary of State Antony Blinken's Paris trip.

"We're eager to have the conversation tomorrow because the agenda really is overflowing," Sullivan said. "There are so many issues in which we and France come from common values, common perspectives, common interests, and need to be aligned in terms of our policy approaches."

The outrage in Paris over the subs agreement was dismissed by some in Washington, and Belin wasn't convinced that the US and France see the stakes of Friday's meeting the same way.

"One is the superpower. The other one is this strong middle power. But you have an imbalance. And for France, having a good relationship, or having a clear relationship, with the US -- it's also a condition, for instance, for influence in Europe," she added.

There have been other rifts, too, such as the surprise over the deadly and chaotic US withdrawal from Afghanistan, which involved NATO allies, such as France.

Macron used the withdrawal to make the case for his larger vision for European global leadership -- particularly its independence from US national security policy.

During a speech from Baghdad this summer, Macron remarked: "Whatever the American choice, we will maintain our presence to fight terrorism in Iraq as long as the terrorist groups continue to operate and as long as the Iraqi government asks us for this support."

The meeting between the two leaders, which is clearly seeking to repair relations, comes just four months after their last summit with other world leaders in Europe, where Macron heaped praise on Biden and called him "part of the club."

"I think that what you demonstrate is that leadership is partnership, and we do appreciate," Macron said.

And asked at the time if allies think America is back, Biden looked at Macron and said, "Ask him," to which Macron replied: "Definitely."

The Macron meeting is a smaller part of a larger theme playing out as Biden returns to Europe for the summits.

Biden, who stepped into his presidency declaring that American diplomacy had returned following a period of Trump-led nationalism, has returned to Europe for the second time since coming into office among a more skeptical group of world leaders.

Leaders attending the global summits in Europe in the coming days, such as Macron, have their own stakes.

France's presidential election is in April. Macron, who is seeking reelection, is on a charm offensive with voters. In June, his party performed poorly in regional elections, which were being closely watched ahead of the presidential vote next spring. However, given the low voter turnout, political experts said it was hard to draw conclusions.

France is also assuming its six-month presidency of the European Union in January -- marking a test for Macron's larger vision. And with German Chancellor Angela Merkel's imminent departure from office, Macron, if reelected, could stand to become the de facto dean of Europe.