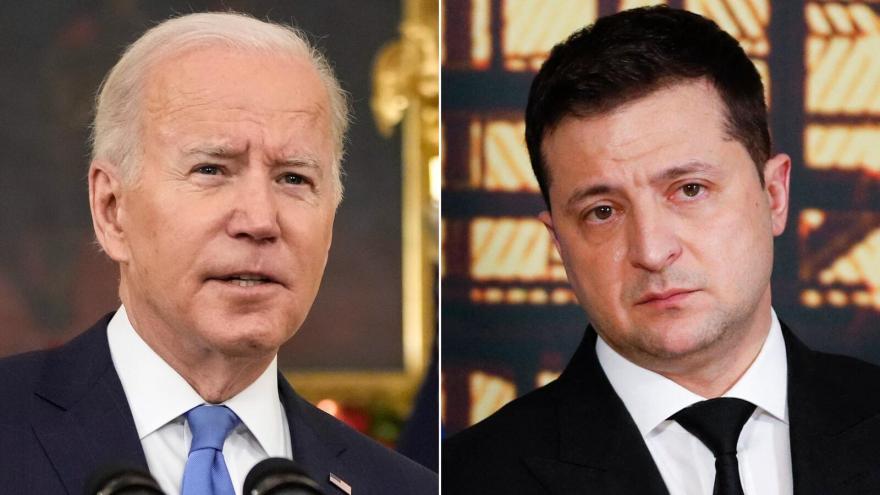 A call between US President Joe Biden and Ukrainian President Volodymyr Zelensky on Thursday "did not go well," a senior Ukrainian official told CNN, amid disagreements over the "risk levels" of a Russian attack.

(CNN) -- President Joe Biden told Ukrainian President Volodymyr Zelensky in a roughly hour-long call Sunday that the US would respond "swiftly and decisively" if Russia takes further steps toward invasion, according to a White House readout of the call.

The call came amid US warnings that a Russian invasion of Ukraine could happen as soon as this week.

"President Biden made clear that the United States would respond swiftly and decisively, together with its Allies and partners, to any further Russian aggression against Ukraine. The two leaders agreed on the importance of continuing to pursue diplomacy and deterrence in response to Russia's military build-up on Ukraine's borders," according to the White House readout.

A senior Ukrainian official said Zelensky renewed calls for Washington to provide greater military and financial support to Ukraine and asked for Biden to visit Ukraine as soon as possible. US officials said a trip by Biden to Ukraine is extremely unlikely.

The official, who had been briefed on the conversation, told CNN that Zelensky used the call to suggest what the official described as "concrete ideas to diminish the Russian threat to Ukraine" such as providing Ukraine greater military support, including more advanced weaponry.

Zelensky also emphasized to Biden the need for a significant financial package for Ukraine, according to the official. The official told CNN the Ukrainian leader stressed to his US counterpart that strong economic support would -- in the words of the official -- "show Putin that the West stands with Ukraine, and that the impact of Putin's escalation would bear no fruit."

According to the Ukrainian official, Zelensky asked Biden to visit Ukraine as soon as possible, but that there had been no positive response from Biden. US officials said a trip by Biden to Ukraine is extremely unlikely.

When reached for comment by CNN, a White House official noted security assistance to Ukraine is ongoing, highlighted shipments in recent weeks and said the administration is exploring "additional macroeconomic support to help Ukraine's economy" amid the Russian military buildup.

Biden and Zelensky last spoke in January and it "did not go well," a senior Ukrainian official told CNN at the time, amid disagreements over the "risk levels" of a Russian attack.

Their latest call Sunday came a day after Biden warned Russian President Vladimir Putin during a call that the US and its allies will respond "decisively and impose swift and severe costs" on Russia should Putin decide to invade Ukraine.

Biden's national security adviser Jake Sullivan on Sunday issued a stark warning that the US believes Russia could launch an invasion of Ukraine this week, but is still holding out hope diplomacy can prevail. Sullivan told CNN's Jake Tapper on "State of the Union" that Russian forces are in a place where an invasion could take place before the end of the Beijing Winter Olympics, which end on February 20.

The US has estimated that Russia has more than 100,000 troops near the Ukraine border, with thousands added just this week, according to an administration official. As of Saturday, the US had moved some of its forces out of Ukraine and ordered the evacuation of most of its embassy staff on Saturday as fears mount over a possible Russian invasion.

Sullivan said the US Embassy in Ukraine is "ready to complete the drawdown ... should that become necessary."