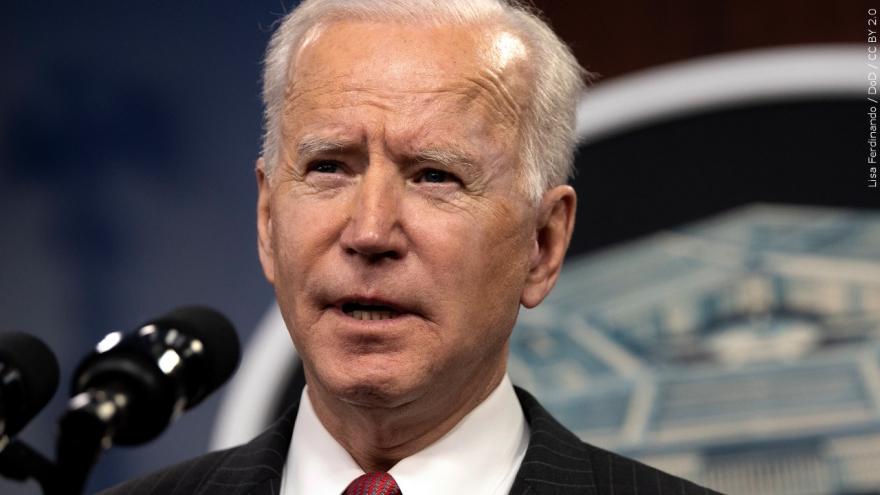 President Joe Biden said to Russian citizens that the US and its allies are not a threat to them.

(CNN) -- President Joe Biden on Tuesday made an appeal for diplomacy to continue as the world watches to see if Russian President Vladimir Putin orders an invasion of neighboring Ukraine, but also warned that a Russian attack on Ukraine will "be met with overwhelming international condemnation."

In a speech at the White House, Biden said to Russian citizens that the US and its allies are not a threat to them and that there's "plenty" of room for diplomacy with Russia to avoid a conflict in Europe.

The President told Russians he did not believe they wanted "a bloody destructive war against Ukraine, a country and the people with whom you share such deep ties of family history and culture."

He harkened back to World War II, pointing out that Americans and Russians had "fought and sacrificed side by side in the worst war in history."

"World War II was a war of necessity, but if Russia attacks Ukraine, it would be a war of choice -- a war without cause or reason," he said, adding that he was not trying to "provoke," but instead wanted to "speak the truth."

"If Russia does invade in the days and weeks ahead, the human costs for Ukraine will be immense, and the strategic cost for Russia will also be immense," the President warned. "If Russia attacks Ukraine, to be met with overwhelming international condemnation."

"The world will not forget that Russia chose needless death and destruction," he said. "Invading Ukraine will prove to be a self-inflicted wound."

Biden sounded optimistic that diplomacy would resolve the crisis after Russia publicly proposed to continue talks, saying, "We should give the diplomacy every chance to succeed and I believe there are real ways to address our respective security concerns."

The President said the US is "proposing new arms control measures, new transparency measures (and) new strategic stability measures," adding that "these measures apply to all parties -- NATO and Russia alike."

"We're willing to make practical, result-oriented steps that can advance our common security," he continued. "We will not sacrifice basic principles, though. Nations have a right to sovereignty and territorial integrity. They have the freedom to set their own course and choose with whom they will associate. But that still leaves plenty of room for diplomacy and for de-escalation. That's the best way forward for all parties in our view."

Despite his optimism about a path forward through diplomacy, Biden also cautioned that the US has not yet verified that Russia has begun the withdrawal of some troops following the completion of recent military drills.

"We have not yet verified the Russian military units are returning to their home bases. Indeed, our analysts indicate that they remain very much in a threatening position," Biden said.

The President also underscored that "Russia has more than 150,000 troops circling Ukraine and Belarus and along Ukraine's border, and invasion remains distinctly possible."

That amassing of troops has continued to raise fears among Western and Ukrainian intelligence officials that an invasion could be imminent.

The Russian defense ministry said troops from its Southern and Western military districts -- parts of which are next door to Ukraine -- had begun to return to their home stations, though the announcement did not say precisely where those troops were permanently based, where they had been exercising, or how many of them were withdrawing.

Russia announced earlier Tuesday that some of its troops would return to base after completing recent drills, but stressed that major military exercises would continue.

Biden, on Tuesday, said that though the US is "not seeking direct confrontation with Russia," he's been clear "that if Russia targets Americans in Ukraine, we will respond forcefully."

"If Russia attacks the United States or allies through asymmetric means, like disruptive cyberattacks against our companies or critical infrastructure, we're prepared to respond," Biden said.

He also addressed the consequences Americans will face if Russia moves into Ukraine, saying that "the American people understand that defending democracy and liberty is never without cost."

The US is prepared to respond to higher energy prices and the potential for cyberattacks, he said.

"I will not pretend this will be painless," Biden noted.

A senior Biden administration official called the Putin call "professional and substantive," but said, "There was no fundamental change in the dynamic that has been unfolding now for several weeks." And a White House statement on Sunday's Ukraine call indicated that Biden said the US would respond "swiftly and decisively" if Russia takes further steps toward invasion.

Last week and through the weekend, Biden's national security adviser, Jake Sullivan, publicly warned that a Russian invasion of Ukraine could happen in the coming days.

"We cannot perfectly predict the day, but we have now been saying for some time that we are in the window, and an invasion could begin, a major military action could begin by Russia in Ukraine any day now -- that includes this coming week, before the end of the Olympics," Sullivan told CNN's Jake Tapper on Sunday's "State of the Union."

He added, "The way they have built up their forces, the way they have maneuvered things in place, makes it a distinct possibility there will be major military action very soon. And we are prepared to continue to work on diplomacy, but we are also prepared to respond in a united and decisive way with our allies and partners should Russia proceed."

The US and other nations have warned their citizens in recent days to leave Ukraine. And on Monday, US announced it would be temporarily relocating its embassy in Kyiv to Lviv, a city in western Ukraine "due to the dramatic acceleration in the buildup of Russian forces," Secretary of State Antony Blinken said.

The Russian Ministry of Foreign Affairs on Friday accused Western countries and the press of spreading a "large-scale disinformation campaign" about an allegedly impending Russian invasion of Ukraine "in order to divert attention from their own aggressive actions."

"At the end of 2021 and the beginning of 2022, the global information space faced a media campaign unprecedented in its scale and sophistication, the purpose of which is to convince the world community that the Russian Federation is preparing an invasion of the territory of Ukraine," the Ministry said in a statement published on its website.

CNN's Stephen Collinson writes the Ukraine crisis is largely a creation of Putin and his personal and disputed version of history, which that holds that the country, which was part of the Soviet Union until its breakup in 1991, should be part of greater Russia. There is also a deep resentment about how the Cold War ended with the admission of former Warsaw Pact nations, which were aligned with the Soviets -- like Poland, Romania and the Baltic states -- into NATO.

While the alliance is defensive in nature, Putin sees its move into eastern Europe as a direct threat to Russia and his notion that Moscow is entitled to a sphere of influence in the region. Ukraine is not a NATO member so the US will not send troops to defend it. But Washington also says it should not be up to Putin to decide the destiny of another independent, sovereign democracy.

In effect, Putin is holding Ukraine hostage with a demand for the withdrawal of NATO forces from eastern Europe that would amount to a major rewriting of the post-Cold War world that Washington will never accept. But he may perceive a historic moment in which he can open divisions in the alliance, forever crush Ukrainian dreams of joining the West, avenge the fall of the Soviet Union and advance his notion of Russian greatness.

As tensions have escalated, Western allies have offered increasing forms of aid and assistance, including lethal aid. The US has shipped weapons supplies and ammunition to Ukraine and offered a sovereign loan guarantee to Ukraine of up to $1 billion to support its economic reform agenda and continued engagement with the International Monetary Fund.

This story has been updated with further developments on Tuesday.