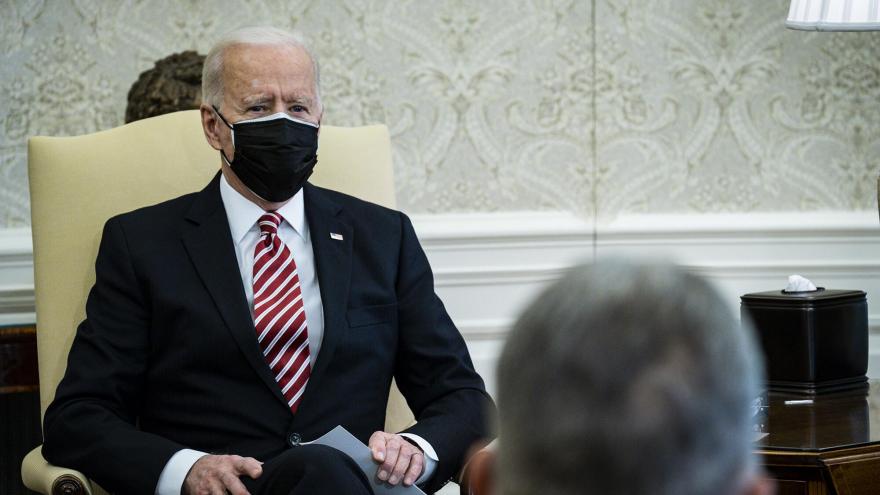 President Joe Biden, seen here in the Oval Office of the White House on February 17, will unveil a $2 billion US contribution to a global coronavirus vaccine initiative on a call with G7 leaders on Friday.

(CNN) -- President Joe Biden will unveil a $2 billion US contribution to a global coronavirus vaccine initiative when he speaks with the leaders of the world's leading market economies on Friday, according to senior administration officials, boosting efforts to distribute shots to low- and middle-income countries as wealthier nations snap up the limited supply.

The announcement, which Biden will announce on a call with G7 leaders, will provide a boon to Covid-19 Vaccines Global Access, or COVAX, which is led by Gavi, the Vaccine Alliance, along with the World Health Organization and the Coalition for Epidemic Preparedness Innovations.

It is the first US contribution to the scheme, which was snubbed by President Donald Trump. Biden will also pledge an additional $2 billion in funding contingent on contributions from other nations and dose delivery targets being met. The money has already been appropriated by Congress.

Administration officials characterized the decision as one meant to prevent further spread and mutation of the virus, which disregards borders and the relative income levels of different countries.

Yet they said no decision had been made on directly donating surplus vaccine doses already purchased by the United States to other countries, which could speed efforts to get the world's population vaccinated.

Other countries, including Russia and China, have begun making their own direct donations to countries of their state-funded vaccines, which the White House has said previously it is watching with concern.

"This pandemic is not going to end unless we end it globally," a senior administration official said. "Pandemics -- they travel. And we also know the more disease that's out there, the more likely we are to see variants."

COVAX hopes to provide vaccinations to at least 20% of the population in 92 of the world's poorest countries by the end of this year. It has secured deals with vaccine makers to purchase more than 2 billion doses using money donated by wealthier countries, though not all of those vaccines have been authorized for use yet.

It had fallen short of its funding targets, but the $2 billion offered by the US will make up significant ground. Trump declined to participate in the global effort, insisting his focus must be on providing shots to Americans.

Biden administration officials said their focus was also on vaccinating Americans and sought to separate the domestic and international efforts.

"This pledge to COVAX does not impact the vaccination program in the United States at all," an official said.

The US government has secured 600 million doses of vaccines made by Pfizer and Moderna that will be available by the end of July. It has also purchased doses of the still-to-be-authorized Johnson & Johnson product, as well as other vaccines still in development.

That is likely to mean the US will have ample surplus doses that could be donated to poorer nations. The Biden administration is looking to develop a framework to donate excess vaccines "once there is a sufficient supply in the US."

The timeline for what will depend on when there is a sufficient supply in the US.

"Our current focus is on vaccinating Americans, getting shots in arms here and in supporting the COVAX effort," said a second senior administration official, indicating that the administration will focus on meeting domestic vaccination needs before sharing vaccines internationally.

Advocates have called on the Biden administration and other wealthy nations to make plans for donating surplus doses, in addition to ramping up their financial contributions.

"It's no longer a question of if the United States will get enough shots for everyone who wants one, but what we plan to do with the excess doses we have purchased," said Tom Hart, North America executive director at The ONE Campaign. "As G7 leaders prepare to meet for the first time since this pandemic started, the Biden administration should show strong global leadership and establish a framework and timeline for a global plan to distribute excess vaccine doses to countries who need it while simultaneously vaccinating the US' domestic population."

Other wealthy nations have also begun reserving large orders of vaccines, leaving poorer nations to rely on the COVAX initiative for their populations -- or on countries such as China, India and Russia, who have begun directly donating their state-produced vaccines to other nations.

Last week, the White House said it was wary of those efforts.

"Certainly we've seen attempts by other countries -- China and Russia -- to use vaccines as a means of making progress diplomatically," White House press secretary Jen Psaki said. "You know, the President is engaged with a range of leaders around the world, conveying how he wants to return the United States to have a central seat on the world stage, and we're working to do that through a range of actions. But we are -- we watch those actions with concern."