Biden to announce new emissions standards, target that 50% of vehicles sold in US by 2030 are electric 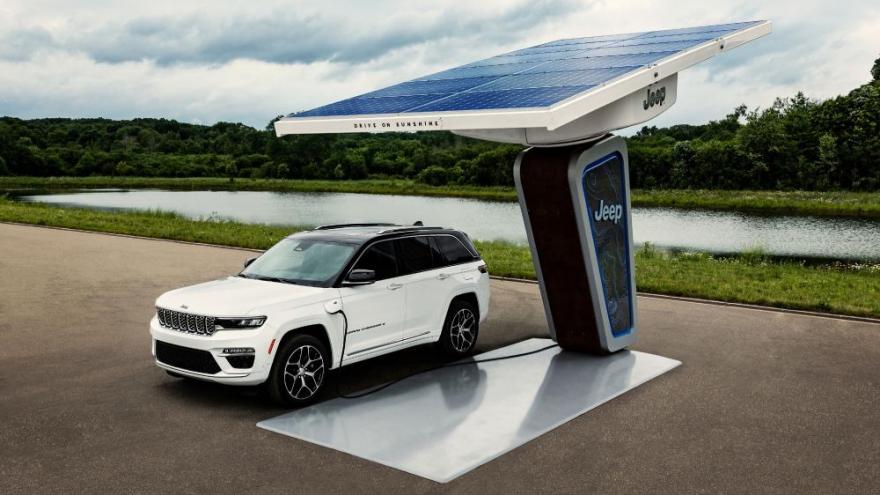 Automakers are expected to support Biden's electric-vehicle target. Photos of the plug-in hybrid 2022 Jeep Grand Cherokee were released in July.

(CNN) -- President Joe Biden will sign an executive order Thursday that points the US auto market toward electric vehicles, announcing a new target that half of vehicles sold in the country by 2030 will be battery electric, fuel-cell electric or plug-in hybrid.

Biden will unveil the executive order at the White House alongside representatives from Ford, GM, and Stellantis, and members of the United Auto Workers Union. The automakers are expected to support Biden's target, announcing their "shared aspiration" that 40-50% of their cars sold by 2030 to be electric vehicles, according to a joint statement from the three automakers.

"This is a paradigm shift," a senior administration official told reporters on Wednesday. "What we're hearing across the board is a consensus about the direction where this industry is going, and a coming together around the recognition that this is the moment of truth, not just for climate action for economic action as well."

The Environmental Protection Agency and Department of Transportation will also announce they are reversing a Trump-era rollback of fuel emissions standards, according to a draft release obtained by CNN. The newly proposed standards from the agencies for light-duty vehicles will be 10% more stringent than the Trump-era rules for 2023 model year vehicles, then becoming 5% more stringent each year. The agencies are also expected to announce a separate set of regulations to reduce greenhouse gas emissions for heavy-duty trucks.

By mileage year 2026, the proposed standards would be the most stringent federal greenhouse gas standards in US history, according to the agencies, but they don't yet lay out a target number for the standards.

Biden's announcement is significant for his administration's climate goals, as transportation accounted for 29% of US greenhouse gas emissions as of 2019.

"This is an important sector of the economy," the senior administration official told CNN on Wednesday. "Transportation emissions represents the largest share of emissions in the economy. It's a central element of the President's climate agenda to tackle the emissions in the space, and it's a central element of his economic agenda to help us grow our leadership in electric vehicles, grow the good paying union jobs that come with it."

Still, some environmental advocates fear car companies could skirt the standards with loopholes -- including allowances for EV makers like Tesla to sell credits to companies that sell gas-guzzling cars, thereby allowing them to meet the standards without electrifying their fleets. Asked by CNN how the new standards would impact those regulatory credits, the official said, "The rules provide a trajectory on credits that the agencies will be taking comment on."

Advocates also called on Biden to implement stronger emissions standards, rather than calling on automakers to hit targets.

"President Biden has called global warming an existential threat, but these standards won't protect us," said Dan Becker, director of the Safe Climate Transport Campaign at the Center for Biological Diversity, in a statement. "The only reason automakers have ever cut pollution is because strong rules forced them to. And these rules won't."

"Biden cannot think of himself as the climate president with a 50% electric vehicles goal," Sunrise executive director Varshini Prakash said in a statement. "FDR didn't set a goal to half win the war, and JFK didn't set a goal to get halfway to the moon. If we are still selling gas cars in 2030, they'll be on the road for another 10, 15, 20 years -- long after his presidency and well into our already unstable futures."

UAW President Ray Curry urged Congress to pass more funding for electric vehicles, as well as stronger labor protections like the PRO Act, which would strengthen the ability of unions to form and bargain.

"The members of the UAW, current and future, are ready to build these electric cars and trucks and the batteries that go in them," Curry said in a statement. "Our members are America's secret weapon in winning this global race."

Like UAW, US automakers called on Biden and Congress to make additional investments in building out electric vehicle infrastructure and incentives in its upcoming reconciliation bill -- calling for a comprehensive network of EV charging stations, and purchasing incentives for consumers.

"This represents a dramatic shift from the U.S. market today that can be achieved only with the timely deployment of the full suite of electrification policies committed to by the Administration in the Build Back Better Plan," Ford, GM, and Stellantis said in the joint statement.