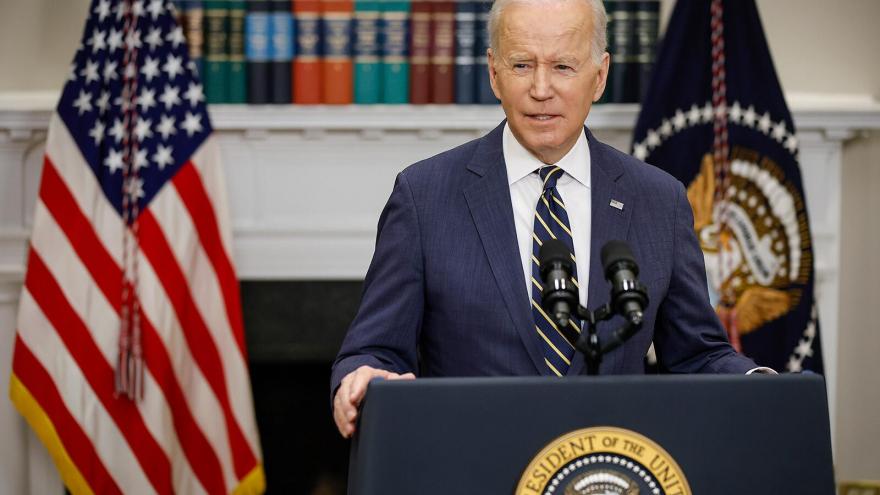 President Joe Biden will announce a new firearm regulation on April 11 meant to contain the use of privately made weapons, senior administration officials said, as he comes under pressure to take more steps to address gun violence.

(CNN) -- President Joe Biden announced a new firearm regulation Monday meant to contain the use of privately made weapons as he comes under pressure to take more steps to address a national crisis of gun violence.

The regulation on so-called "ghost guns" -- unregulated, untraceable weapons made from kits -- will address a critical gap in the government's ability to track them by requiring background checks before purchase and serial numbers on some of the components. Though ghost guns make up a relatively small share of the guns recovered by law enforcement, they have been seen with increasing frequency in recent years.

Biden brought one of the kits to the Rose Garden on Monday, declaring the new rules "basic common sense" before holding aloft one of the weapons made from the gear.

"If you buy a couch you have to assemble, it's still a couch. If you order a package like this one over here that includes that parts that you need and directs the assembly of a functioning firearm, you bought a gun," he declared, striding over to the kit and demonstrating the ease of constructing the weapon.

"It doesn't take very long," he said. "Anyone can order it in the mail."

Biden also named Steve Dettelbach, a former US attorney from Ohio, as his nominee to lead the Bureau of Alcohol, Tobacco, Firearms and Explosives. The President's previous nominee was forced to withdraw amid opposition in the Senate.

"This mission of this agency isn't controversial -- it's public safety," Biden said.

The moves came as gun violence and crime have ticked up in the United States, putting pressure on the White House to take action. A rash of shootings over the weekend underscored the emergency: Four people, including two teens, were shot shortly after a Major League Baseball game in Washington, DC, on Saturday night, police said. In Illinois, six people were found injured after a shooting occurred in a residential neighborhood.

Police are also investigating a shooting at a birthday party in Indianapolis where six people were shot and one person was killed. And two people were also killed and 10 hospitalized after a "targeted attack" at a Cedar Rapids nightclub, police say.

"None of this absolves Congress ... for the responsibility to act," Biden said.

The new rule issued by the Justice Department seeks to rein in a type of weapon that has been seen more and more at crime scenes across the country. Ghost gun kits can be purchased online, and a weapon can be self-manufactured in as little as 30 minutes. Because regulators cannot trace them, ghost guns are appealing to criminals and those with criminal histories, according to officials.

The new rules require anyone purchasing a kit to undergo a background check, as is required for other types of firearm purchases. It also requires those selling the kits to mark components with a serial number, so the eventual weapon produced can be traced. And it mandates firearm dealers add a serial number to already built ghost guns they come across in their businesses.

"All of a sudden, it's no longer a ghost," Biden said of the new rules. "It has a return address. And it's going to help save lives, reduce crime and get more criminals off the streets."

"Ghost guns look like a gun, they shoot like a gun, and they kill like a gun, but up until now they haven't been regulated like a gun," John Feinblatt, president of Everytown for Gun Safety, said in a statement celebrating the Biden administration for "doubling down on its commitment to gun safety."

Mia Tretta, who was shot and wounded with a ghost gun in a school shooting in California in 2019, similarly praised the administration for taking "a critical step" with the new regulation. Tretta introduced the President in the Rose Garden on Monday.

"If you can put together an IKEA dresser, you can build a ghost gun," she said in a statement. "Unfortunately, it is that easy to get a weapon that has not only changed my life but has done the same thing to thousands of others. Finalizing this rule is a critical step to making sure no one else has to go through what my family has had to go through."

The Justice Department previously launched a national ghost gun enforcement initiative, which will "train a national cadre of prosecutors and disseminate investigation and prosecution tools to help bring cases against those who use ghost guns to commit crimes," according to the White House.

Biden said Monday that those who commit a crime using a ghost gun should "expect federal prosecution."

"This rule is an important step. It is going to make a difference, I promise you," Biden said.

Ghost guns have been used in multiple recent shootings, including at a Maryland high school in January. The exact number in circulation is unknowable, given the inability of regulators to track them.

Between 2016 and 2021, the ATF received 45,000 reports of privately made firearms recovered by law enforcement, including 692 from homicides or attempted homicides. The agency was able to trace only 1% of them, officials said, because the firearms lack serial numbers.

Last week, Maryland joined Washington, DC, and 10 other states -- California, Connecticut, Delaware, Hawaii, Nevada, New Jersey, New York, Rhode Island, Virginia and Washington -- in banning or restricting the purchase or use of ghost guns, which are often bought online and assembled at home.

Senate Majority Leader Chuck Schumer again decried the use of ghost guns during a press conference Sunday, calling for a crackdown on the rise of the privately made firearms and speaking about a deadly shooting in the Bronx Friday.

Aidan Johnston, the director of federal affairs for Gun Owners of America, said in a statement Sunday, "Biden's proposal to create a comprehensive national gun registry and end the online sale of gun parts without the passage of a new law exemplifies his disregard for the Second Amendment."

In September, Biden withdrew his nomination of David Chipman to lead the ATF after facing opposition from Republicans and certain moderate Democrats.

Chipman, a former career official at ATF, came under scrutiny from gun rights supporters and the National Rifle Association for his work as a senior adviser to Everytown for Gun Safety and Giffords -- the organization started by former Rep. Gabrielle Giffords, who was shot at an event in her Arizona district in 2011.

Dettelbach ran unsuccessfully for Ohio attorney general in 2018 after serving as US attorney in the state.

"We will be working hard to ensure that Steve Dettelbach receives the fair hearing and confirmation that he deserves. He should be a noncontroversial candidate because he has a long record of working in law enforcement and for the public safety of the people of Ohio and the American people," one of the officials said.