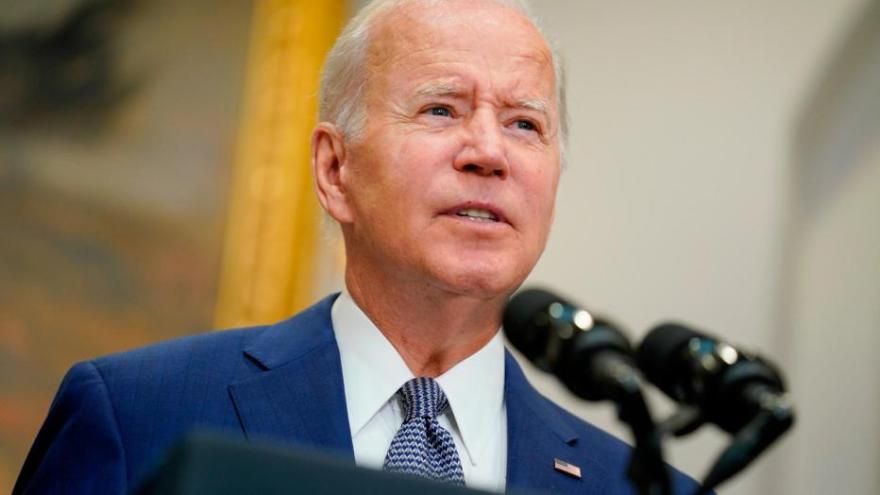 Biden will be joined at the White House by "survivors and family members of victims of mass shootings from Columbine, Virginia Tech, Aurora, Tucson, Sandy Hook, Parkland, Santa Fe, Uvalde, Buffalo, Highland Park, and more," the White House said in a fact sheet, "as well as survivors and family members of daily acts of gun violence that don't make national headlines."

Elected officials from communities impacted by gun violence and gun safety advocates and experts are also set to attend, the White House added.

The event will focus on the bipartisan gun safety package, which represents the most significant new federal legislation to address gun violence since the expired 10-year assault weapons ban of 1994 -- though it fails to ban any weapons and falls far short of what the President and his party had advocated for, and polls show most Americans want to see.

The legislation includes $750 million to help states implement and run crisis intervention programs. The money can be used to implement and manage red flag programs -- which through court orders can temporarily prevent individuals in crisis from accessing firearms -- and for other crisis intervention programs like mental health courts, drug courts and veterans courts.

It also closes a years-old loophole in domestic violence law, known as the "boyfriend loophole," which barred individuals who have been convicted of domestic violence crimes against spouses, partners with whom they shared children, or partners with whom they cohabitated, from having guns. Old statutes didn't include intimate partners who may not live together, be married or share children.

Just before signing the legislation last month, Biden praised the families of gun violence victims with whom he had met. He said their activism in the face of loss had made a difference.

"I especially want to thank the families that Jill and I have (met), many of whom we sat with for hours on end, across the country. There's so many we've gotten to know who've lost their soul to an epidemic of gun violence. They've lost their child, their husband, their wife," Biden said.

"Nothing is going to fill that void in their hearts. But they led the way so other families will not have the experience and the pain and trauma they've had to live through."

Titled the Bipartisan Safer Communities Act, the bill had been released by Republican Sens. John Cornyn of Texas and Thom Tillis of North Carolina and Democratic Sens. Chris Murphy of Connecticut and Kyrsten Sinema of Arizona.

It came together in the aftermath of recent mass shootings at a Uvalde, Texas, elementary school and a Buffalo, New York, supermarket that was in a predominantly Black neighborhood.