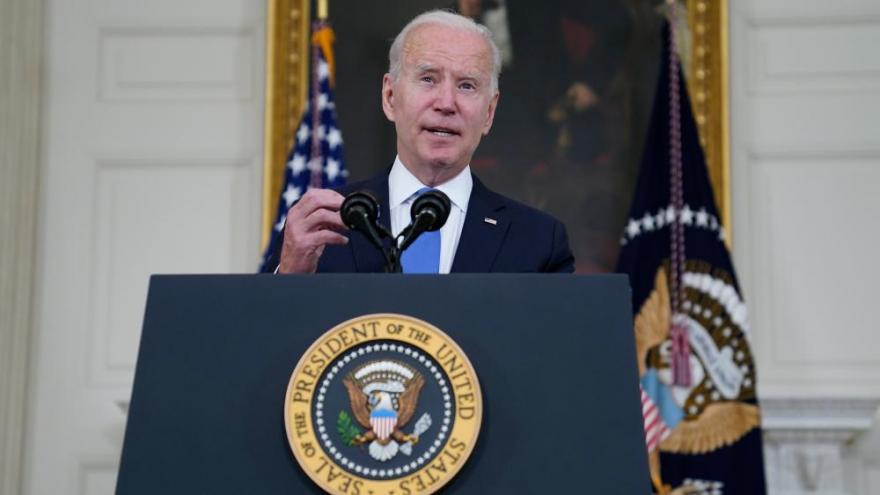 President Joe Biden on May 6 will make the case that his sweeping economic proposals are better positioned to bolster the middle class than tax cuts for the wealthy and corporations, according to a White House official.

(CNN) -- President Joe Biden on Thursday will make the case that his sweeping economic proposals are better positioned to bolster the middle class than tax cuts for the wealthy and corporations, according to a White House official.

During his trip to Louisiana, the President will, according to the official, pose the question to the American public and to members of Congress: "What is better for America: A tax cut to make corporations and CEOs richer or investments that will make our country stronger, and make life better for the people who build and sustain this country?"

The President will speak in Lake Charles on Thursday in front of Calcasieu River Bridge, a 70-year-old bridge that is 20 years older than its designated lifespan, according to the official, in an attempt to highlight the need to invest in the nation's crumbling infrastructure.

Biden will be joined in Lake Charles by the city's Republican mayor, Nic Hunter, and the state's Democratic governor, John Bel Edwards. The Republican mayor recently co-authored an op-ed with the Democratic mayor of Shreveport on the need to the pass the American Jobs Plan. The President will make the point that investments in infrastructure have been bipartisan priorities for decades.

The President will make the case that reforming the tax code would allow for the kind of large-scale investments in infrastructure, education, jobs, child care and paid leave that his American Jobs Plan and American Families Plan call for. His proposals to Congress together total roughly $4 trillion.

"As the President has said before, this is a blue-collar blueprint to build America," the official said.

The President will take aim at the Republicans' 2017 sweeping tax bill, which the White House says fueled corporate stock buybacks and added nearly $2 trillion to the deficit.

"He'll talk about a broken tax code that let 55 of the biggest, most profitable, corporations pay nothing in federal taxes in 2019, and poured billions of dollars into the pockets of CEOs," the official said.

Biden's American Jobs Plan would raise the corporate income tax rate to 28%, up from 21%. The rate had been as high as 35% before former President Donald Trump and congressional Republicans cut taxes in 2017. Raising corporate taxes was a core campaign promise of Biden's, and the administration says would raise more than $2 trillion over the next 15 years.

Later on Thursday, the President will tour the Carrollton Water Plant in New Orleans.

During the 2020 election, Trump vowed to improve the Calcaiseu River Bridge during a speech in Hackberry, Louisiana, acknowledging the bridge's notorious problems. Trump promised "a brand new I-10 bridge," if he won the presidential election.

Biden on Wednesday defended his pitch to raise certain taxes to fund his economic proposals by saying his plan will not hurt most wealthy Americans and corporations but will instead help the kind of people he grew up with.

"We're not going to deprive any of these executives their second or third home, travel privately by jet. It's not going to affect their standing at all. Not a little tiny bit. But I can affect the standard of living of people I grew up with -- if they have a job," Biden said on Wednesday at a White House event.

He said restoring higher tax rates on the wealthiest Americans would grow the economy. "Benefits everybody. Hurts nobody," Biden said.

The President on Thursday will highlight the economic impact his proposals would have on the American middle class and note that 90% of the jobs his infrastructure plan would create wouldn't require a college degree.

Biden's American Jobs Plan is a roughly $2 trillion proposal to improving the nation's infrastructure and shift the country to greener energy over the next eight years. The proposal would invest heavily in transportation, caregiving for aging and disabled Americans, manufacturing, housing, research and development, schools, and digital infrastructure, among other areas.

The President's two proposals are aimed at helping the nation's economy recover from the coronavirus pandemic.