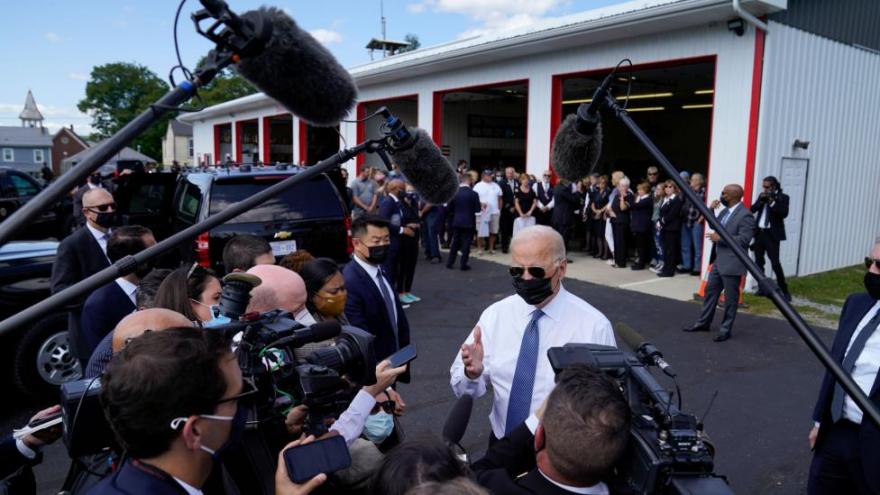 Joe Biden, seen here in Shanksville, Pennsylvania, on September 11, will survey on Monday the wildfire damage on the West Coast.

(CNN) -- President Joe Biden on Monday will survey wildfire damage on the West Coast and argue recent extreme weather events underscore the urgency of his economic agenda and making investments in the nation's infrastructure to combat the climate crisis, a White House official told CNN.

"During the trip, President Biden will see firsthand the significant physical, human, and economic costs of the wildfires," the official said. "As one in three Americans are impacted by the increasing frequency of ferocity of extreme weather events, he will reiterate the message he shared on the east coast last week: the climate crisis is a code red."

The official continued: "He will make clear that these extreme weather events require bold, ambitious, and decisive action -- now."

Biden's trip on Monday will be his first official trip to the West Coast as president. He will first travel to Boise, Idaho, where he will receive a briefing from federal and state fire agency officials and visit the National Interagency Fire Center.

The President will then travel to Mather, California, where he will receive a briefing from local, state, and federal emergency response personnel on the impacts of recent wildfires and survey damage from the Caldor Fire by taking an aerial tour of El Dorado County.

The President will deliver remarks on his administration's response to recent wildfires and make the case for his twin economic proposals and specifically how they would strengthen the nation's resilience to the climate crisis and extreme weather events.

In the evening, Biden will then travel to Long Beach, California, and deliver remarks at a campaign rally with Governor Gavin Newsom ahead of Tuesday's recall election. Newsom is attempting to stave off a Republican-backed effort to oust him, which is motivated in part by anger toward his pandemic restrictions.

The trip follows the President's visit to New York and New Jersey last week where he surveyed damage caused by Hurricane Ida. Biden said last week he planned to press Congress to take further action on his infrastructure proposals after remnants of Ida caused dangerous flash floods and tornadoes across the Northeast and as wildfires were burning their way across the western US.

On Tuesday, the President will travel to Denver, Colorado, where he will continue his push for his economic agenda and argue how the investments would help the nation tackle the climate crisis and modernize the nation's infrastructure, the official said.

Idaho has 22 fires currently burning and California has 13 burning, according to the National Interagency Fire Center.

Cal Fire Chief Thom Porter warned last week that California's fire season is "far from over" and forecasters predicted dry and windy weather conditions will continue to create the ideal environment for wildfires to ignite and expand.