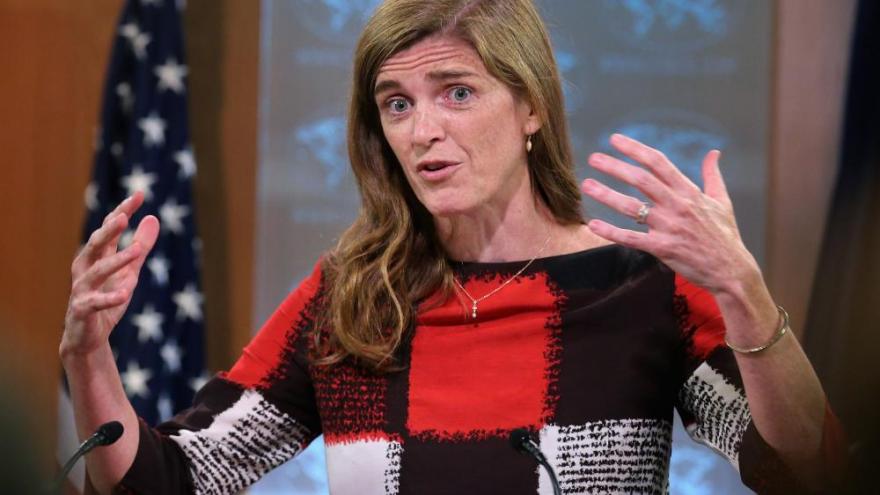 President-elect Joe Biden is expected to nominate ex-UN Ambassador Samantha Power, seen here at the State Department on September 1, 2015, in Washington, DC, to lead the US humanitarian aid agency.

The Biden transition team also announced that the USAID administrator position will be elevated as a member of the National Security Council.

Power was US Ambassador to the United Nations during former President Barack Obama's second term in office. She was confirmed to the role in 2013 with a 87-10 vote to succeed Susan Rice, who became Obama's national security adviser.

As the US envoy to the UN, she memorably delivered a scathing rebuke against Syrian President Bashar al-Assad and his allies for the humanitarian crisis in Aleppo, helped the UN battle Ebola and pushed the Obama administration's advocacy for global LGBTQ rights. She helped hold the first-ever UN Security Council session focused on an LGBTQ issue and creating a UN Human Rights Council watchdog to prevent violence and discrimination for gay and transgender people.

Before she was named US ambassador, she served on Obama's National Security Council as a senior director for multilateral affairs and human rights and a former special assistant to the president. Power was reportedly among those who urged Obama and his Secretary of State Hillary Clinton to take militarily intervene in Libya in 2011.

Power won a Pulitzer Prize for her book, "A Problem from Hell: America in the Age of Genocide," in which she criticized the global failure to respond to genocides, and was a war correspondent in Bosnia in the 90s.

In his statement Wednesday, Biden lauded Power as a "world-renowned voice of conscience and moral clarity."

"I know firsthand the unparalleled knowledge and tireless commitment to principled American engagement she brings to the table, and her expertise and perspective will be essential as our country reasserts its role as a leader on the world stage," the President-elect added.

In a video released later Wednesday by the Biden presidential transition team, Power said that throughout her career she has witnessed what USAID "does on the ground for vulnerable people. "

"I have seen the partnerships that that they have forged with other countries who are pursing economic development. I have seen the ingenuity, the determination, the curiosity and the humanity of USAID staff, and I couldn't be more excited to work with them," she said.

Biden has chosen several historic nominees for Cabinet positions and other top roles, including many who have decades of experience in their field or have served in Obama's administration and have familiarity with working with Biden.

The USAID administrator position is a Senate-confirmed role.

Under the Trump administration, the agency had a number of controversial political appointees join its ranks and repeatedly faced the threat of proposed budget cuts, which Congress rejected.