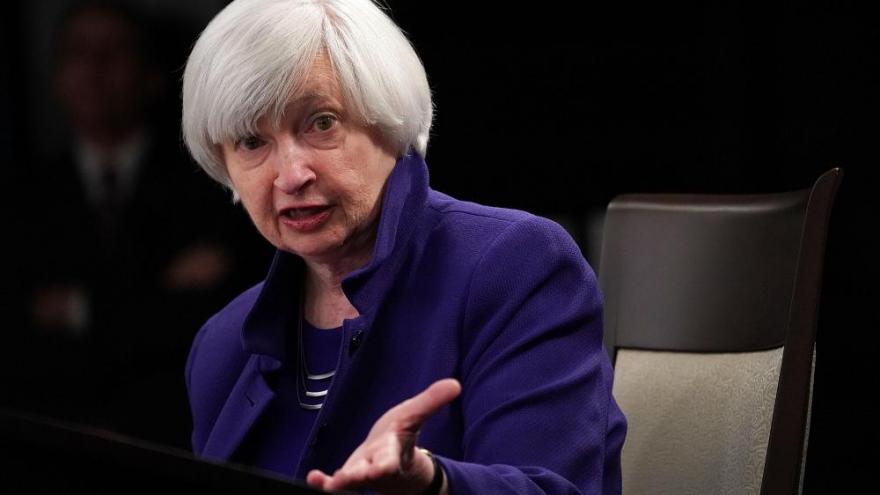 President-elect Joe Biden will choose Janet Yellen, former chair of the Federal Reserve, as his secretary of the Treasury, according to a source with knowledge of the pick.

(CNN) -- President-elect Joe Biden will choose Janet Yellen, former chair of the Federal Reserve, as his secretary of the Treasury, according to two sources with knowledge of the pick.

Yellen, who will be the first woman to hold the job should she be confirmed by the Senate, will be tasked to lead Biden's economic response to the coronavirus pandemic, which has wreaked havoc on the economy and led millions of Americans to lose their jobs. She will also be asked to make good on the former vice president's campaign promise to narrow the economic disparities between the rich and middle class and poor Americans.

Jen Psaki, a senior adviser for the Biden transition team, said, "The President-elect looks forward to announcing some members of his economic team early next week who will work with him to build the economy back better."

Biden's decision was also a nod to divisions within his own party, which he has sought to keep at peace by selecting Cabinet and White House officials with appeal across ideological lines. The President-elect touted his Treasury pick -- then a mystery -- last week by promising in unusually explicit terms that it would be "someone who will be accepted by all elements of the Democratic Party, from the progressive to the moderate coalitions."

His prediction has largely come true.

Massachusetts Sen. Elizabeth Warren praised Yellen in a tweet responding to news of the coming nomination.

"Janet Yellen would be an outstanding choice for Treasury Secretary. She is smart, tough, and principled," Warren said. "As one of the most successful Fed Chairs ever, she has stood up to Wall Street banks, including holding Wells Fargo accountable for cheating working families."

Progressive groups like Democracy for America and the Progressive Change Campaign Committee, a group closely allied with Warren, have praised Yellen as a groundbreaking pick and expressed confidence that she will drive a hard bargain with the big banks.

"Among those not named Elizabeth Warren, Janet Yellen is high up on the list of people favored by progressives and people across the Democratic Party," PCCC co-founder Adam Green said in a statement. "Biden knew that someone beholden to Wall Street would have undermined his ambitious economic campaign promises at the worst possible time. As Treasury Secretary, Yellen will faithfully implement the ambitious economic agenda Biden campaigned on."

But Yellen also holds an appeal among some in the business community, including those who feared Warren herself might be the choice, because she is viewed as a more predictable figure, in part because of her time as Fed chair, and the market's strength during her tenure.

"Janet Yellen is brilliant and has a track record for being unflappable," Greg Valliere, chief US policy strategist at AGF Investments, said. "She seems to be popular in all factions, from the financial markets to Main Street."

The historic nature of Yellen's nomination could also help with skeptical Democrats, though she is -- as Biden suggested -- unlikely to invite much pushback. And Republicans, who will keep control of the Senate if they don't get swept in two Georgia Senate runoffs early next year, have previously voted to confirm Yellen, including in her nomination to Fed chair.

After a long career in academia and different federal reserve roles, Yellen was nominated by President Barack Obama to become chair of the Federal Reserve -- the first woman to hold the position -- in a role she filled from 2014 to 2018. President Donald Trump opted not to renominate Yellen during his first year in office, instead nominating Jerome Powell to take the top job.

On her final day in that office, the Fed hit Wells Fargo with heavy sanctions in response to what it described then as "widespread consumer abuses." That included its infamous creation of 3.5 million fake customer accounts.

The punishment capped the firm's size and led to a pledge by the bank to ultimately remove four board members. It was, according to a Fed official, the first time the body every imposed cap on the assets of a financial institution.

"We cannot tolerate pervasive and persistent misconduct at any bank," Yellen said before leaving her post.