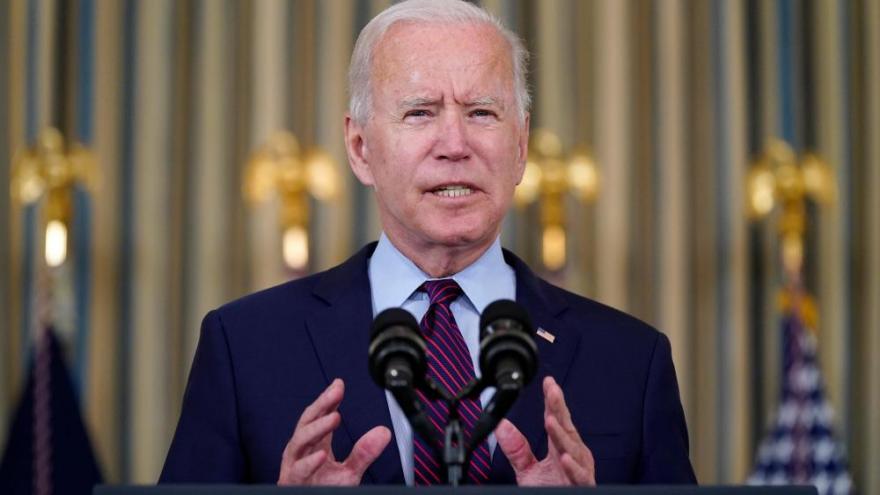 President Joe Biden on Tuesday will travel to Michigan to rally support for his twin economic packages. Biden is shown here in the State Dining Room of the White House, Monday, October 4, 2021, in Washington.

(CNN) -- President Joe Biden on Tuesday will travel to Michigan to rally support for his twin economic packages that remain stalled on Capitol Hill because of sharp divisions within his own party about the size and scope of the plans.

A White House official told CNN that Biden will argue both components of his Build Back Better agenda -- a $1.2 trillion infrastructure package and a larger $3.5 trillion bill to expand the social safety net -- are essential to the country's economic growth, particularly to support middle-class and working families.

Biden will argue the country is at a historic turning point, the official said, and that the country needs to make the kind of large-scale investments that competitors like China are making in order to kickstart the economy. Biden will highlight China's spending in education -- particularly on early and higher education -- and argue the US needs to make similar investments, the official said.

The trip to Howell, Michigan, will come after the President meets virtually with Democratic members of the House to discuss the two economic packages. Senior White House officials were up on Capitol Hill last week trying to broker an agreement but were unsuccessful in hammering out a framework that enough members would sign on to, which forced Democrats to punt on the agenda.

Biden will visit the International Union of Operating Engineers Local 324 training facility in Howell, which is where he will deliver remarks.

Ahead of Biden's trip, a nonprofit advocacy group trying to help build support for Biden's policy agenda announced it was launching a televised ad campaign in Michigan.

Build Back Together posted on Twitter: "We are launching a six-figure TV investment in Michigan, ahead of @POTUS trip to Howell, to highlight how the #BuildBackBetter agenda will create jobs and lower costs for everyday families, while making the ultra-wealthy finally pay their fair share!"

Howell is located in a key swing district to watch ahead of the 2022 midterm elections. The district, which stretches from the heavily Democratic state capital of Lansing through more Republican rural parts of southeastern Michigan toward the edge of the Detroit suburbs, is the home of moderate Democratic Rep. Elissa Slotkin, who was first elected in 2018. Slotkin will be on site for Biden's visit, per a White House official, but will not be traveling aboard Air Force One, as she is already in the district.

Biden will also focus on how his plans would reform the tax code and how he plans to tax the wealthiest corporations and Americans in order to pay for his plans, the official said. He will stress the needs for his economic plan is urgent and will greatly benefit Americans all across the country.

The President's speech comes as the deadline to raise the debt ceiling to avoid the US defaulting for the first time ever is less than two weeks away. Congress has until October 18 to increase the country's borrowing limit, Treasury Secretary Janet Yellen warned lawmakers last week, or there could be catastrophic consequences.

Biden said on Monday he couldn't guarantee the debt ceiling would be raised in time because of "hypocritical, dangerous and disgraceful" Republican opposition. Congressional Republicans are steadfastly refusing to supply any votes to raise the debt limit, and Biden said they should vote on a bipartisan basis to pay for bills for which both parties are responsible.